One of the least-understood appellations in Oregon Pinot Noir country is McMinnville.

Many wine lovers associate it with the city of McMinnville, which is nearby but is not inside the American Viticultural Area that was approved in 2005. In fact, the McMinnville AVA is on a hillside west of town and is home to such vineyards as Meredith Mitchell, Yamhill Valley and Maysara.

One of the classic vineyards in McMinnville that helps define the AVA is Hyland. This 100-acre vineyard was first planted in 1971, making it among the oldest in Oregon’s northern Willamette Valley.

Those first plantings in 1971 and 1973 were on their own roots and include the classic Pommard and Wadensvil clones. Also among these is a version of Pinot Noir known as the “Coury clone,” named for Charles Coury, an early Oregon Pinot Noir pioneer. According to The Prince of Pinot, Coury might have brought the Coury clone with him from Europe (known as a “suitcase selection” for the way such vines were snuck into the country). Coury arrived in Oregon in 1965 and bought a vineyard near Forest Grove in the northern Willamette Valley. He also started a nursery and sold what was then believed to be a Pommard clone but turned out to be something else entirely. Regardless, it’s now dubbed the “Coury clone.”

Coury ended up returning to California in the 1980s to get into microbrewing and died in 2004, according to The Prince of Pinot.

Coury’s version of Pinot Noir ended up being among the first planted at Hyland in 1971, and that original block remains today. Owner/winemaker Laurent Montalieu honors Coury, his contributions to the early Oregon wine industry and the special vines he left behind on the McMinnville hillside.

In the late 1980s, more grapes were planted at Hyland, this time the Dijon 115 clone of Pinot Noir. Montalieu and his wife, Danielle Andrus Montalieu, purchased the property in 2007 with partner John Niemeyer, and now makes the first estate wines from the vineyard. They also sell grapes to such Oregon producers as Penner-Ash, Sokol Blosser, Coeur de Terre, Erath, Antica Terra and Tendril.

Here are three Hyland wines we’ve tasted recently. While the 2009 is sold out at the winery, the 2010s are on the market (as are the recently released 2011s). 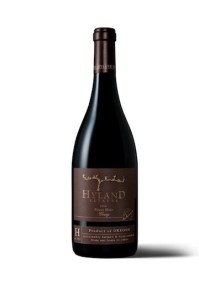 Hyland Estates 2010 Coury Pinot Noir, McMinnville, $60
Excellent: Hyland Estates in Oregon’s McMinnville AVA was planted beginning in 1971, making it one of the northern Willamette Valley’s oldest vineyards. In 2007, longtime Oregon winemaker Laurent Montalieu and his wife, Danielle Andrus Montalieu, bought the site and now, they are making wines under the Hyland label. While Oregon’s 2010 vintage will be remembered in part for the dramatic damage caused by migrating birds, the grapes that remained produced some delicious wines, including this Pinot Noir. It opens with aromas of leather, lime zest, green peppercorns and other spices, followed by flavors of black currants, mint, strawberries and president plums. It’s all backed with bright acidity. For food pairings, we would suggest duck, turkey or risotto, or even try a mushroom and lentil stew. Looking for something more exotic? Consider the Indian dish saag paneer. (28 cases, 13.7% alc.) 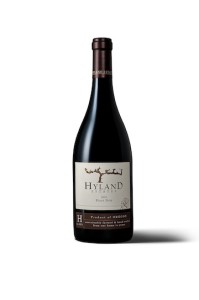 Hyland Estates 2010 Pinot Noir, McMinnville, $35
Excellent: The 2010 vintage was not easy for Oregon winemakers. It was cool, and it rained during bloom, which reduced the size of the crop. Fortunately for Laurent Montalieu of Hyland, October brought sun instead of rain for the first three weeks. He harvested the grapes from this estate vineyard beginning Oct. 23 and just beat the rains that followed. This is a distinctive Pinot Noir with aromas of juniper, black currant, black pepper and mushrooms, followed by bright flavors of currant, pomegranate, raspberry and plenty of intriguing black pepper. This is a beautifully balanced wine that should only improve with a few years in the cellar. (129 cases, 13.7% alc.)

Hyland Estates 2009 Pinot Noir, McMinnville, $35
Excellent: In 2009, Oregon winemakers enjoyed warm, dry temperatures, which resulted in grapes often being picked a bit earlier than usual without as much pressure from autumn rains. In fact, the grapes for this wine were selected between Sept. 28 and Oct. 15, which is plenty early for Oregon. The resulting wine is showing beautifully now, with aromas of cedar, spice, mint, violets and blueberries. On the palate, it’s youthful, juicy and hedonistic, with modest, approachable tannins and flavors of red currants and cranberries. It is a harmonious wine from beginning to end. This wine is sold out at the winery. (245 cases, 14.1% alc.)