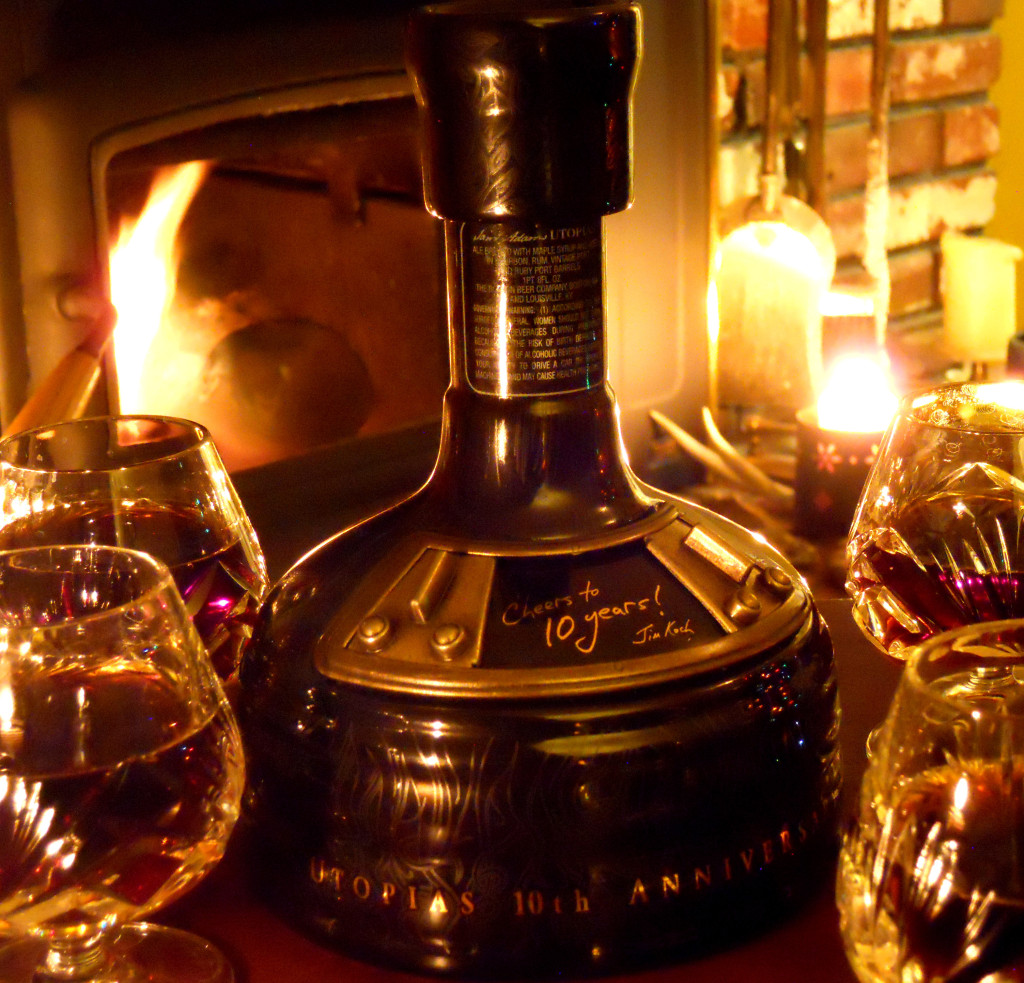 Want to coax a beer drinker into becoming a fan of Port-style wines? Introduce that friend to Samuel Adams Utopias.

In fact, consider serving the Utopias 10 in a brandy snifter and see who will believe it is a tawny Port. After all, this remarkable beer is uncarbonated, resembles a Cognac while sitting in the glass and checks in at 58 proof. That’s 29 percent alcohol by volume.

Production of the Sam Adams Utopias 10 was limited to 54 barrels, fewer than 1,250 cases. And a wee dram goes a long way, a good thing considering a 750-milliliter bottle retails for $190.

I broke out my prized bottle of the 10th anniversary batch of Samuel Adams Utopias during the annual pre-judging soiree for Wine Press Northwest’s 2012 Platinum Competition.

Several spoke of its sherry-like approach, describing it as both high-quality and high-proof. One judge deemed it as “mystical,” and the story behind this beer is rather fascinating.

Jim Koch, the famous founding brewer of Samuel Adams, wrote that he began to dream of “extreme beer,” as he called it more than 20 years ago. His first commercial release, 1994, was a Triple Bock he claimed set the record as the strongest beer at 17.5 percent alcohol and marked the first time a U.S. brewer aged beer in a previously used barrel.

Eight years later, in 2002, Sam Adams released its first Utopias — at 24%. Koch’s team continues to push the boundaries with its use of malts (two-row pale, smoked, Munich and Caramel 60) and special yeasts (including a sparkling wine yeast), so the 2012 batch stands at 29%. And some of its heritage includes the mother 1993 Triple Bock from Jack Daniels barrels, a feature of the solera process that incorporates small portions of brew in barrels from each year.

“While some of our barrels have reached over 33% alcohol, we blend down to 29% because taste, not alcohol percentage, is the goal,” Koch said in the news release from Sam Adams.

The aromatics of the Sam Adams Utopias comes with esters of the alcohol that poke out, akin to many Port-style offerings. There are hints of fresh-baked brownies, toffee, caramel, Tootsie Roll and Heath Bar, while still emitting a whiff of its hoppy heritage. The list of hops includes Hallertau, Mittelfruch, Spalt Spalter, Tettnang Tettmanger and three varieties of Noble.

On the palate, its beer qualities do not stand out. Rather, it drinks reminiscent of Starbucks liqueur with its flavors of drip coffee, golden raisins, fig, maple syrup, molasses and cedar. The finish of salted caramel and dried orange peel comes across as a tawny that’s close to dry, and it’s far from cloying because of the accompanying acidity.

I didn’t dare reach for my favorite cigar, though, because the structure is not robust enough for a Hoyo de Monterrey Excalibur 1066.

The fine folks at The Boston Beer Co. include a Utopias Glass, designed by Riedel to focus the aromatics, although Chris Pagnotta of Men’s Journal wrote “a port glass or brandy snifter would serve equally well.” And the resealable 750-milliliter bottle itself is rather eye-catching, a black decanter made to look like a miniature mash tun with doors that open to reveal, “Cheers to 10 Years! – Jim Koch”

That special jug has its suitors, but there’s still a dram or two left. And here’s a link to RateBeer.com, where several of its readers offer their thoughts.