In “The Makers of American Wine: A Record of Two Hundred Years,” author Thomas Pinney brings into focus the evolution of the American wine industry. 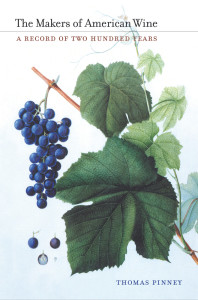 The Makers of American Wine: A Record of Two Hundred Years is a history of U.S. wine production.

And it has been an evolution, as post-Revolutionary War viticulture and winemaking was nothing short of an adventure and a lengthy series of frustrating events. American winemakers had to battle not only phylloxera and a climate that did not seem to want vinifera grapes planted in this continent’s soil, but also an attitude by members of the young nation, who seemed to prefer rough spirits to fine wine.

On top of that was the dark years of Prohibition (and the dry years leading up to the “great experiment”) and the effects it had for more than three decades after Repeal in 1933.

Pinney is arguably the foremost expert on the history of American wine, having previously written “A History of Wine in America, Volume 1” and “Volume 2.” He shows he is perfectly skilled to write this history as well.

Pinney profiles 13 important characters from the past two centuries, giants who carried a nation – often kicking and dragging – into an era of winemaking and wine appreciation that once was the dominion of Europeans. Today, of course, the United States is not only the fourth-largest producer of wine in the world (and one of the highest in quality), but also the No. 1 consumer of wine on the planet.

John James Dufour: He was a European who arrived 20 years after the beginning of the Revolutionary War who semi-successfully put together groups of investors to plant vineyards and make wine in Kentucky and Indiana, both using native American grape varieties.

George Husmann: He led Germans used to winemaking to a somewhat successful career in Missouri. Husmann actually went to California during the gold rush, then returned to Missouri in the 1850s to grow wine grapes into the Civil War. Husman also wrote the nation’s first journal dedicated to wine, called “Grape Culturist.” Husmann ultimately returned to California, where he became involved in the region’s early grape-growing efforts.

Charles Kohler: While others hold the title of “father of California viticulture,” Pinney argues Kohler is one of the people responsible for lifting California wines to new heights. Kohler owned a company called Kohler and Frohling, which exported California wine throughout the United States, bringing a previously unknown wine region to fame. Kohler worked primarily in Southern California.

Andrea Sbarboro: When one thinks of American wine, especially in California, the Italian influence cannot be overlooked, and Sbarboro was among the earliest. He is best known for launching Italian Swiss Colony in Sonoma County in the late 1800s with Pietro Rossi and building a pre-Prohibition reputation for quality in Northern California. At one point, they built an 11 million gallon capacity.

Percy T. Morgan: The California Wine Association is not necessarily treated well by history, but Pinney paints a bit different picture of the CWA and its founder, Percy Morgan. He built the CWA into a force – a monopoly, in fact – that tended to figuratively crush its competition while literally crushing millions of tons of wine grapes. The 1906 San Francisco earthquake was but a temporary setback form the CWA, which charged forward toward Prohibition.

Paul Garrett: Garrett got into the wine business through family connections and turned out to be a natural salesman. He built a national market prior to Prohibition, based primarily in the South. His most famous contribution was a wine called Virginia Dare, made originally with the Scuppernong grape.

Ernest and Julio Gallo: Jumping into the post-Prohibition era, Pinney describes the oft-told history of the Gallo brothers from the point of view of how they basically bootstrapped their way into wine dominance at a time when the American wine industry was struggling to find anyone to drink their wares. He also describes how they created a jug wine industry while actually trying to build fine wine – something it would take the company years to achieve – and many would argue that Gallo still has not shaken that monkey from its back.

Frank Schoonmaker: Schoonmaker was a wine importer and author who eventually came around to promoting American wines, though he was an early and vocal critic of California’s efforts to steal European wine names such as Chablis, Burgundy and Champagne with cheap imitations. This is, of course, an issue that still resonates today, especially with the European Union.

Maynard Amerine: The American wine industry needed science to move forward. Ultimately, that fell to Amerine, who was an early leader in moving the science and study of winemaking and viticulture to the University of California-Davis (from the Berkeley campus). His tireless research helped map where different grape varieties should be planted up and down the Golden State, and his work continues to direct the industry today, years after his death.

Konstantin Frank: Moving back to the East Coast, Pinney tells the story of Frank, a German (born in Russia) who moved to the United States and basically forced vinifera vines to grow where they had not grown before – the Finger Lakes region of upstate New York. His work led to one of the most exciting cool-climate regions in the United States today.

Robert Mondavi: If anyone embodies modern American winemaking, it is Robert Mondavi, a tireless promoter and lover of life. Pinney’s profile of Mondavi takes us inside his struggles and successes from the Central Valley to the Napa Valley.

Cathy Corison: It seems Pinney felt compelled to include a woman amid his 13 profiles to show the development of female winemakers, and he chose Corison, a Napa Valley winemaker of high repute. Much of this chapter somewhat chides the industry for overlooking women in an industry dominated by men, and it feels a bit forced. While it was interesting to learn about Corison’s journey, it was almost anticlimactic to end with this profile.

One certainly could argue that it would have been appropriate to include profiles of William Bridgman or Walter Clore to show the origins of the Washington wine industry, and that is probably the only thing lacking in this superb history of American wine.