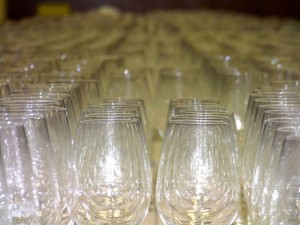 Judges are set up in preparation for the sweepstakes portion of the San Francisco Wine Competition in January 2012.

The San Francisco Chronicle Wine Competition takes place in the northern Sonoma County town of Cloverdale (it’s so close to Mendocino County, you can smell the marijuana). The Chron judging is formerly known as the Cloverdale Citrus Fair Wine Competition and included wines from the surrounding region when it launched in 1983.

In 2000, the San Francisco Chronicle became the competition’s title sponsor, and the judging has since taken off, expanding first to a statewide competition, then the West Coast and now nationwide.

The Pacific Northwest has always fared well at the Chronicle judging. In fact, Barnard Griffin in Richland, Wash., has won a gold medal for its rosé of Sangiovese for an astonishing seven consecutive years. And it has won best rosé for each of the last two years.

The competition begins this morning, and the sweepstakes judging, which will involve more than 100 top wines, will conclude about 11 a.m. Friday. Soon after, we will begin reporting results here on Great Northwest Wine.

Also part of the Chronicle judging is the public tasting. This year, it is Saturday, Feb. 16, at Fort Mason Center in San Francisco in the northern Marina District east of the Golden Gate Bridge.

Tickets are $70 in advance and $85 at the door (don’t rely on any tickets being available at the door, as the event often is sold out).