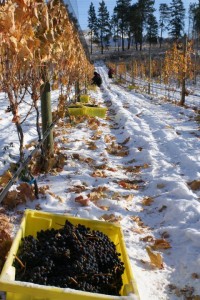 OLIVER, British Columbia – It has been more than two months since wine grape harvest finished across the Pacific Northwest.

But producers of British Columbia ice wines can finally close the book on the 2012 vintage, thanks to a cold snap that froze the last clusters of grapes on the vine last weekend and gave them the nectar that will become precious ice wine.

“It’s a lot of hard work,” said Sandra Oldfield, owner and winemaker for Tinhorn Creek Vineyards near Oliver. “You have to bring all the pickers back out when you’re not in that mood anymore. You’re in the harvest-is-over mood.”

To make ice wine, vintners must wait until the grapes freeze on the vine. A few drops of hyper-sweet, honey-like juice are squeezed out of each already-desiccated globe and fermented into one of the greatest wonders of the wine world.

Oldfield, a California transplant who just finished her 19th harvest north of the border, makes a small amount of ice wine from Kerner, a white grape. She brought in only about 2 tons of grapes this week.

“We probably lost almost half to birds, even though it was netted,” she said. “It was quail, most likely coming in through the side of the netting.”

Birds, deer and weather are three of the main obstacles to producing ice wine, but the effort is worth it. In British Columbia, ice wine is put into half-bottles, which are 375 milliliters. And they fetch anywhere from $40 to $100 per bottle.

This year, Oldfield has enough juice to make 100 cases, most of which she will sell at her winery and on-site restaurant, Miradoro.

Just down the road, Walter Gehringer of Gehringer Brothers Estate Winery makes ice wines using Riesling, Ehrenfelser and Cabernet Franc. Picking grapes in mid-January is not optimal because of the quality of the grapes that are left, he said, but it isn’t unusual. In fact, five years ago, he picked on Feb. 28. The earliest he has harvest was the first year he made ice wine: Halloween 2002.

Making ice wine in Canada is serious business that comes with legal restrictions because the wines are so expensive. For example, the weather must drop to at least minus 8 Celsius — about 17 degrees Fahrenheit — and conditions must stay that way for at least several hours. Sticking the grapes in a freezer is not allowed. One year, a winemaker harvested grapes during a brief window at the proper temperature, then drove his truck into the mountains, where a snowstorm was occurring to ensure the grapes would remain frozen. That was against the rules, as it turned out.

The term “icewine” is a trademark that can be used only in Canada and only when all the regulations are followed. In the United States — where winemakers may do pretty much whatever they want to get the grapes frozen — the wine must be labeled something else, including “ice wine” (two words).

“The commitment to icewine is insane,” Gehringer said. “You can’t plan a life. You never know when you are going to have time off.”

Take for instance, a wedding. Gehringer’s son is getting married this weekend in Australia, and his wife flew out last week. But the weatherman said a cold front was coming through, and Gehringer believed this might be his last shot at getting icewine. So he stayed home, hoping to bring his grapes in and still hop on a plane to Adelaide in time to be there for his son’s nuptials.

The gamble paid off. Temperatures dropped to minus 13 Celsius, and Gehringer assembled a crew by 12:30 a.m. Saturday to harvest 4 acres of grapes by hand. They had all the fruit in by 10 a.m., then he squeezed the grapes and began the fermentation. By Wednesday, he was on a plane to Australia, where he will stay for just a few days.

“I want to get back because I need to watch my fermentations,” he said.

Fermenting juice that is so sweet is a bit of a trick, and if it stops or slows, that can be disastrous.

“Trying to restart a fermentation is a nightmare,” Gehringer said. “Once you’re in fermentation mode, you want to keep it chugging along. You don’t want to upset the yeast.”

For Scott Williams, winemaker at Kiona Vineyards Winery on Washington’s Red Mountain, ice wine harvest was not nearly so dramatic. He makes an ice wine each year from Chenin Blanc grapes. In 2012, he picked his grapes Nov. 11 when temperatures dropped to 22 degrees Fahrenheit and got 1,400 gallons of juice that is still slowly fermenting.

Williams said if he had to use the same rules as Canadian winemakers, he would rarely be able to make ice wine.

Gehringer will bottle his ice wines in March or April, and they will be available by May or June.

“Of all winemaking, this is the worst,” Gehringer said. “Most people don’t appreciate the commitment to making ice wine. It’s not normal. You have to be a bit crazy.”