How does cold weather damage grapevines in Washington wine country? 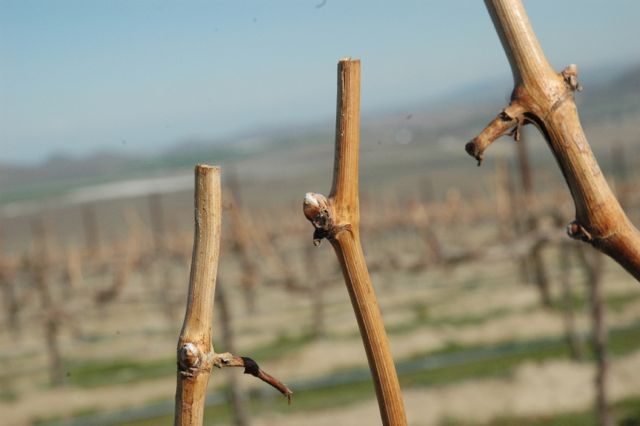 Buds are the bumps on a grapevine that hold each vintage’s future.

Washington wine country temperatures for the past 10 days or so have varied from 25 to 35 degrees, a good level to keep grapevines in their winter slumber without causing damage.

With that in mind, here is a quick primer on how damage can happen to Washington wine grapevines.

Bud damage is the most common problem with wine grapevines in Washington wine country. Buds are the small bumps that form each June and become the following year’s growth. In other words, the 2013 vintage began to take shape in June 2012. Inside each bud are really small leaves, and from them spring forth leaves, canes, shoots and grapes.

Typically, growers will go through a number of vines in a block to check for damage after a winter event.

Phloem damage refers to bark around a vine’s canes and trunks. Washington State University researchers say if temperatures drop to a certain point and 10 percent phloem damage happens, then the vine’s wood can become damaged. According to WSU, the phloem can handle up to 50 percent damage and still produce grapes.

Xylem is the wood on a vine, and damage to it can critically compromise a grapevine’s well-being and even its survival.

How cold is too cold for grapevines?

How cold must it get for a grapevine to be damaged in Washington wine country? Several factors go into making that determination. Three important factors include:

Some European grape varieties, in particular Riesling, Cabernet Franc and Gewurztraminer, are deemed “winter hardy.” Others, including Zinfandel, Syrah and Merlot, are considered “tender” to winter damage. At WSU’s research station in the Yakima Valley town of Prosser, cold hardiness is measured by variety.

Concord grapes, which are an important crop in Washington, are extremely winter hardy. It won’t begin to suffer bud damage until temperatures plummet to minus 16, and 90 percent bud damage won’t occur until minus 24.5 degrees (at which time, the region would have all kinds of problems).

So if you want to grow Syrah in Washington wine country, you should consider growing it in an area that historically never gets too cold. For the past 60 years or so, that would have been in the Horse Heaven Hills, though that region saw significant damage a couple of years ago for the first time in decades.

Grape growers can limit damage to their vines by planting vineyards:

These three factors are reasons why Zinfandel, for example, is most often grown in the Lower Columbia Gorge of Washington wine country. There is near-constant wind and the land slopes toward the Columbia River.

Sometimes, simply having cold weather isn’t the biggest issue. For example, in 1996 temperatures skyrocketed into unseasonably mid-50s in mid-January. As a result, grapevines began to awaken from their winter slumber and water began to fill the plants’ cells. Then temperatures crashed to minus 18 in areas. The water inside the cells frozen and expanded. This caused damage to about 60 percent of the vines in the Columbia Valley. Even worse, cloudless skies during the day reflected off the snow around the vines, warming them during the day. Nighttime temperatures would plummet again, causing additional damage.

In many cases that year, grape growers simply headed into their vineyards with chainsaws, cut down their vines and retrained them from their root systems, which were safely underground. 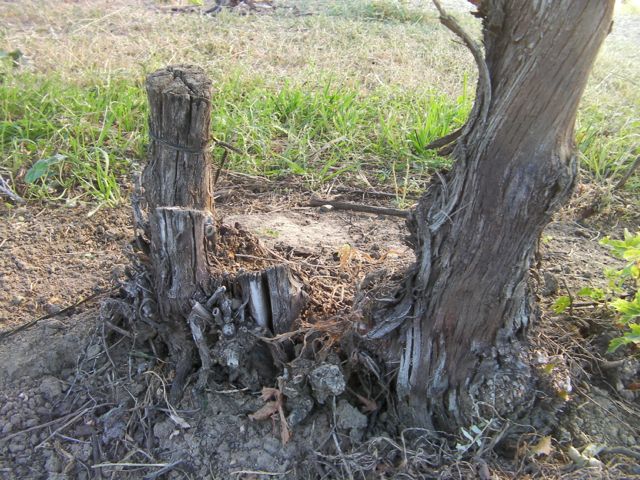 This Muscat of Alexandria vine in the Yakima Valley was planted in 1917, and a history of extreme damage in the subsequent 90-plus years is evident. One can see where the vine has been cut down and retrained the following year.

This extreme action can take place only in Washington. In any other region of the world, vines would need to be pulled out of the ground and replanted. Then the next three years’ worth of crop would be lost. However, Washington wine country is one of the few places on the globe where grapevines are planted on their own roots.

Phylloxera, a root louse, destroys European grape varieties. In the 1800s, most of France’s vines were wiped out by phylloxera. The same thing happened in the last century in California, Oregon and regions on the East Coast of the United States. To battle the root louse, European grape varieties are grafted onto phylloxera-resistant vines native to North America. Thus, the part that is several inches above ground (and away from the phylloxera) is the European variety.

Just a tiny bit of phylloxera exists in Washington wine country, and it doesn’t affect wine grapes. The well-draining sandy soils thwart phylloxera because it needs dense soils to move around better. Phylloxera also does not like Washington’s cold winters.

While growing wine grapes in Washington’s Columbia Valley is not difficult, cold winter events every five to eight years can cause all kinds of challenges unlike those found elsewhere in the world of wine.