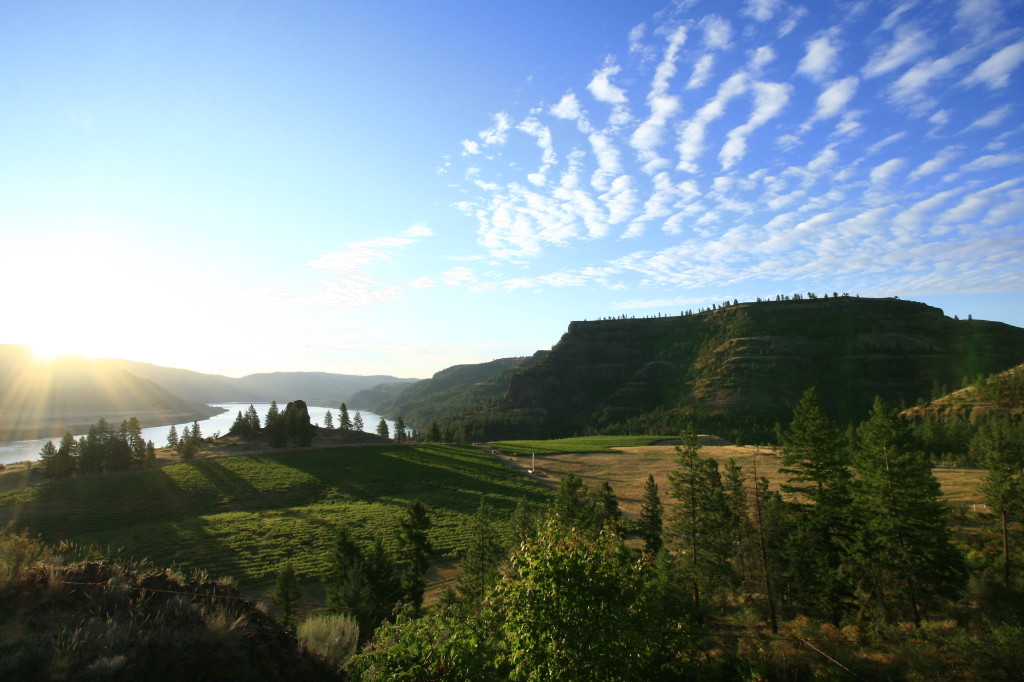 SPOKANE, Wash. – Sports-loving winemaker Michael Haig is a big fan of singer Jimmy Buffett, and ‘Tin Cup Chalice’ could have been written for the quarterback of Whitestone Vineyard & Winery near Spokane.

“He has a tin cup for a chalice and fills it up with some fine red wine,” Haig said of the 1974 song. “He’s pointing out that great wine doesn’t always have to be served in an elegant glass.”

Haig, a longtime Seattle Seahawks fan, playfully pairs his wines with junk food so one might think Super Bowl Sunday would be akin to a holiday. Not so.

“I’ve scheduled myself to do a wine tasting because I have no interest,” he said. “Seattle should be the NFC team there, not San Francisco.”

“Not all great bottles are consumed by candlelight and white china in a romantic setting with the one you love,” Haig said. “I’d bet most wine is consumed in sweatpants with the kids yelling and you stealing their chicken nuggets while you’ve got a glass of wine in one hand frantically trying to get the kids settled and their lunches for the next day made.”

He’s dubbed his special tasting as the Whitestone Wine & Junk Food event, and the matinee is scheduled for Saturday, Feb. 2, at his year-old tasting room in downtown Spokane.

“We’re going to the store’s frozen food section and getting everything that can be deep fried,” Haig said. “Imagine fried chicken and fish sticks.”

“When it comes to really greasy fried chicken, I like the Cabernet Franc ($27),” Haig said. “It’ has a nice little tartness to it, and you know that little bit of grease between the skin and the meat? The Cab Franc will cleanse that off your palate really good.”

Fish sticks? They won’t get paired with Pinot Gris under his Not Whitestone label because Haig hates white wine. In fact, Not Whitestone ($10) is a custom-crush wine and the only white he sells.

“You’ve almost got to go with the Merlot, especially if you fry the fish with bread crumbs,” Haig said. “The Merlot ($27) is a bit more fruity, and it doesn’t matter if you dip the fish sticks in tartar sauce or ketchup. You’ll still be fine with the Merlot.”

Whitestone also will be pairing Doritos and Fritos with his nonvintage Pieces of Red ($21), a blend of Bordeaux varieties.

“But here’s the key thing that I’ve found — I drink it out of a coffee mug,” he said. “When you are with the boys and playing poker or watching the game and enjoying some nice junk food like summer sausage, cheese and chips, all your friends may be drinking beer. You put red wine in a coffee mug.

“Now if you are drinking our St. Vincent, our high-end blend ($35), make sure you stick your pinkie finger out while drinking from the coffee cup — just to class it up a bit,” Haig added.

Onion rings? “That’s one pairing question that everyone seems to be asking, but I can’t give away everything before the party!” Haig chuckled. “People will have to either be here or get it off our Twitter account. We’ll really be getting after our Twitter feed that afternoon.”

Make no mistake, Haig crafts serious wines at his 2,000-case operation in the tiny Palouse town of Wilbur. Whitestone wines are neither clumsy nor smothered by oak, allowing for high-toned red fruit flavors such as cassis, Marionberry, Montmorency cherry and Craisin. 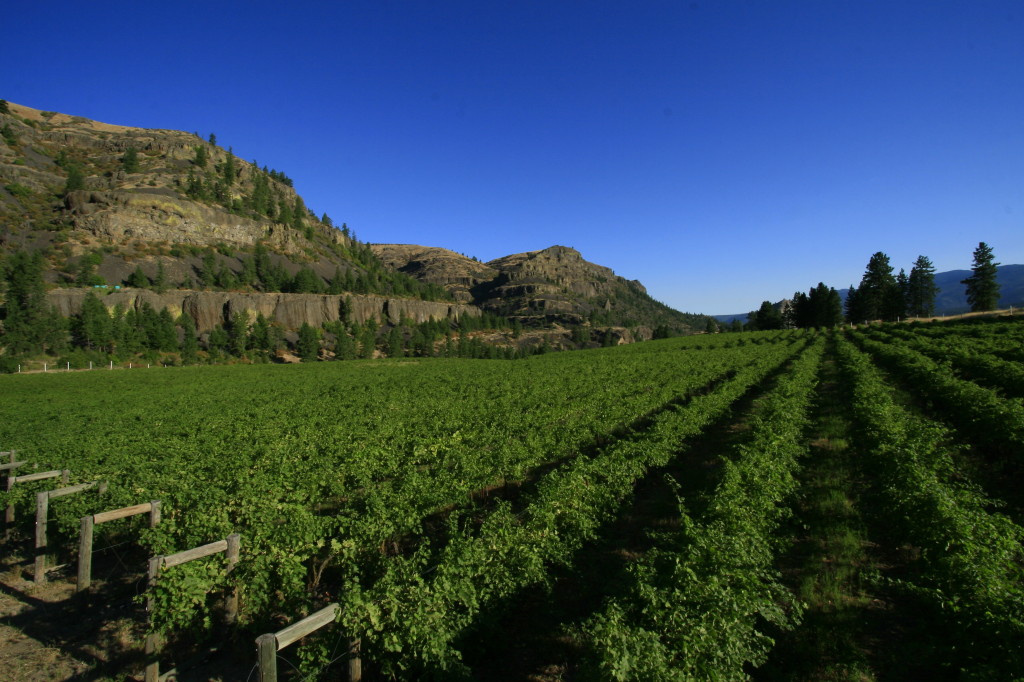 The winery is named after Whitestone Rock – the iconic feature of Lake Roosevelt National Recreation Area – the family-owned operation keeps Haig on the run. He splits his time between the estate Lake Roosevelt Shores Vineyard, on a plateau at 1,600 feet elevation overlooking the Columbia River just upstream Whitestone Rock, the boat warehouse he transformed into a production facility 20 miles from the vineyard, a quaint tasting room (which used to be a gas station) across the street from the Wilbur winery, and the new tasting room near the Davenport Hotel in Spokane.

“It sounds like a big corporation, but then, so did Sub Pop Records in Seattle during the Nineties, and it was just two guys,” Haig chuckled.

In 2009, Whitestone first opened a Spokane tasting room near the Maple Street Bridge. Three years later, he moved into the heart of downtown after learning that a print shop closed its doors.

“We’re a half-block from the Davenport (Hotel), so we get a lot of walk-in traffic and this allows us to sell directly to the customers,” Haig said. “Besides, wineries take up a lot of space and are loud and smelly at different times of the year.

“This way, we can focus our production facility on the making of wine and tasting room on the enjoyment of wine,” Haig said. “Maybe one out of 100 people who visit my tasting room get sad when they learn it’s not a production facility. We have barrels in the tasting room, and I tell those people, ‘Imagine these barrels are full of wine.’ Not a lot happens. I don’t have to worry about guests slipping on wet floors or tripping over hoses.”

Whitestone recently reached an agreement with the nearby RiverPark Square parking garage on discounted parking for tasting room customers, who can sit, relax and watch the traffic on Post Street.

“The consumer can walk leisurely to a couple of tasting rooms, and this is a lot more comfortable,” he said. “They can taste wine and then walk a block or two for dinner, instead of driving, so we are starting to see more little tasting rooms in downtown Spokane.”

Haig lives in Spokane, but the vineyard and his personal watercraft are an hour-long drive west. The Haig family lake cabin is surrounded by the Columbia River on one side and 30 acres of deer fence on the other. Haig does most of the farming for the 16 acres of Bordeaux varieties, which were first planted in 1992 with help from Washington State University and longtime viticulture expert Bob Wample.

Haig said he’s noticed a change in weather patterns during the past two decades.

“Summer doesn’t seem to begin until July these days, but it seems to be lasting until October, thank goodness,” he said.

Early customers for Whitestone fruit included some historic Walla Walla wineries — Canoe Ridge Vineyards, L’Ecole No. 41 and Walla Walla Vintners — but in 2001, Walter and Judy Haig began to keep some grapes and make wine. Within four years, they stopped selling their fruit as Michael took the lead both in winery and in the vineyard, less than a mile upstream from Lake Roosevelt’s iconic Whitestone rock formation.

There are plans to plan another 5 acres at his parents’ vineyard, which yields an average of 2 tons per acre.

“It’s a battle between me and my dad, who just wants to plant more Cab Sauv,” Haig said. “I’m a big fan of the Spanish wines. We don’t see a lot of the Spanish grapes planted in our area, but I want to try some things like Tempranillo or Grenache. We will not plant a white grape, I know that.” 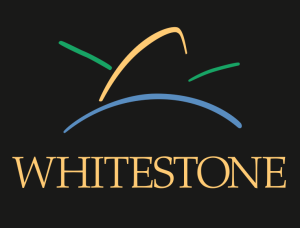 Whitestone Winery has its estate vineyard along Lake Roosevelt in Washington state and tasting rooms in Spokane and the wheat ranching town of Wilbur.

Each year, Whitestone wines rate as some of the Pacific Northwest’s most food-friendly, and Haig has participated in the Ded.Reckoning project, a special bottling for Anacortes wine merchant Doug Charles. Earlier this year, Charles received the Walter Clore Honorarium, the top honor handed out by the Washington State Wine Commission for service to the state’s wine industry.

“I’m doing an event there at Compass Wines in March,” Haig said. “He’s one of my only wholesale guys now. He was the first guy who really made a commitment to us. He’s always been loyal to us, and we’ve been loyal to him. I like supporting the local wine shops.”