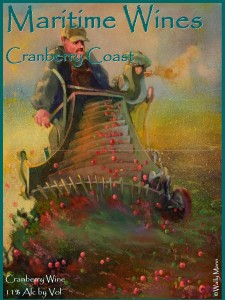 This label for Maritime Wines portrays the Furford Picker, a mechanical cranberry harvester invented during the 1950s in nearby Grayland. The device has yet to be improved upon.

ABERDEEN, Wash. – Westport Winery has added another group of wines to its already extensive lineup.

The coastal Washington winery that has wowed consumers and critics alike since launching in 2008 has increased the number of wines it makes by three with the addition of a second label called Maritime Wines.

Dana Roberts, winemaker for the family-owned operation, now makes more than 30 different wines, many of which are fruit-based bottlings. His sparkling Gewürztraminer won a Platinum award in Wine Press Northwest‘s annual best-of-the-best competition in 2011, and the winery also was the magazine’s 2011 Washington Winery to Watch.

The new wines include:

Artwork for the wines were created by Wally Mann, an artist in the town of Tokeland.

Since opening in 2008, Westport Winery has added multiple wines, a restaurant, bakery and nursery operation. It has planted cool-climate wines on its property just eight miles from the Washington coast, and it created a grapevine maze and an outdoor sculpture garden that honors many of its wines.

Many of Westport’s wines also help regional charities. For example, it makes a Pinot Noir called Pinot Noirvana, which honors singer Kurt Cobain of the band Nirvana, who grew up in the region. Proceeds from the wine are going toward helping to build a youth center in Aberdeen. And a red blend called Bella plays off the “Twilight” series of books and movies about vampires, the setting for which is up the coast in the town of Forks. Proceeds from this wine help the local blood bank.

All of Westport’s wines have a tie-in with the coastal region, and the new Maritime line plays into that, as well.