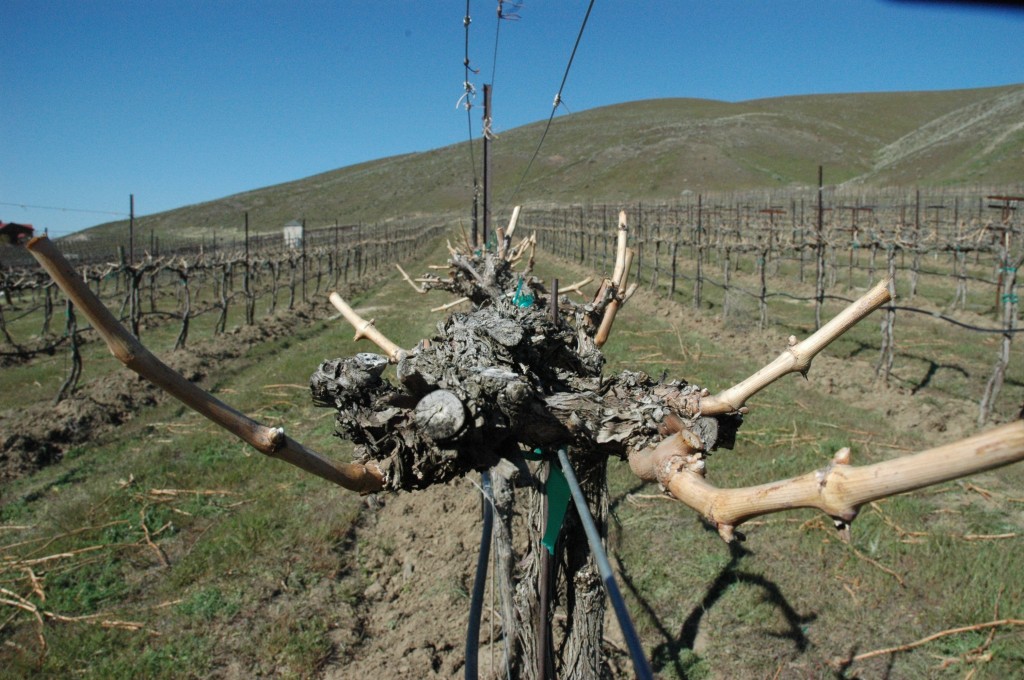 Grape vines are in great shape across Washington wine country at this point because of what has been described as a mild winter. (Photo by Andy Perdue/Great Northwest Wine)

KENNEWICK, Wash. – So far, so good. That’s what Washington wine grape growers are saying after a mild winter in Washington’s Columbia Valley.

“So far, it looks really great,” said Kent Waliser, who managers Sagemoor Farms north of Pasco and on the Wahluke Slope. “It’s not too cold and not too hot. We’re happy at this point, and we don’t foresee any unusually warm weather, which would bring us out of dormancy and subject us to cold events.”

During the winter, grapevines go dormant to protect the buds, which hold the next year’s crop of grapes. In November 2010, temperatures dropped to extremely low temperatures, causing severe damage across the Columbia Valley, particularly in the Horse Heaven Hills. This “winter event” caused severe vine damage and a much lower crop that year.

This year is much, much different in Washington wine country.

“We haven’t had any temperatures that would cause us to have any level of concern whatsoever,” said Waliser, who also serves as chairman of the Washington State Wine Commission board of directors.

“We had a really mild fall,” he said. “It was pretty late before we had any really cold weather, and most places didn’t make it into the single digits. Everything is 100 percent good.”

Wolfe, who came to Washington in the late 1970s as a viticulturist for Chateau Ste. Michelle, said if the Columbia Valley can get through mid-February without severely cold weather, then growers become less concerned about winter injury to their vines.

Frost a problem through April in Washington wine country

Frost, though, remains a concern, Waliser and Wolfe said.

Growers also are concerned about buds breaking open too early because the tender leaves then are susceptible to frost damage. In the Columbia Valley, bud break begins around the first week of April and goes through mid- to late April, depending on location and variety. Frost concerns extend through early May.

“Our chances are good once we get through the winter,” Waliser said. “We have tools to fight frost better than subzero temperatures in the middle of winter.”