“If you look at Elkton for its potential, it’s a classic region for Pinot Noir, Pinot Gris, Gewürztraminer, Müller-Thurgau and other cool-climate varieties,” Jones said.

The new AVA is entirely within the Umpqua Valley and is nearly 75,000 acres in size, and at the time the petition was written, about 70 acres of wine grapes were planted. That has increased to about 100, said Terry Brandborg, whose eponymous winery is in Elkton. Brandborg said a flurry of new activity is taking place in and around Elkton by those who are beginning to recognize the region as superb for growing cool-climate grapes such as Pinot Noir.

“Even Oregonians see Southern Oregon as warmer and drier, and the cool climate is up north,” he said. “The founders of the Oregon Pinot Noir industry have pretty much captured that brand.” 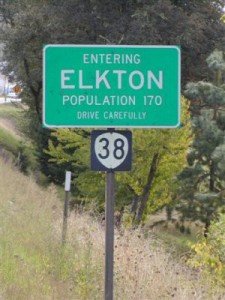 Brandborg came north from the Bay Area, where he owned a winery in Richmond, Calif. He and his wife, Sue, scouted areas to make Pinot Noir and came upon Elkton in 2000.

“Pinot Noir has been grown in Elkton since 1972,” Brandborg said, adding that the area reminded him of the Anderson Valley and Mendocino County, two cooler areas in Northern California.

Brandborg became convinced Elkton was the place for him to grow Pinot Noir after meeting Earl Jones, Greg’s father and owner of Abacela near Roseburg.

“Earl told us to check out Elkton because he knew we liked cool-climate whites and Pinot Noir,” Brandborg said.

They moved to Elkton in 2002 and purchased 145 acres in the hills above town, where they have planted five acres of Pinot Noir. Their tasting room and production facility are in a building on the main drag of the small town.

Elkton Oregon AVA cool – but dry when it counts

The Elkton Oregon AVA is 35 miles from the Pacific Ocean, and while it is easily the wettest location in the Umpqua Valley – averaging more than 50 inches of rain per year – most of the precipitation occurs during the cold season, Greg Jones said. He added that the risk of having rain during harvest stops at the divide between the southern Willamette and northern Umpqua Valleys.

Of equal importance, Jones said, the Elkton area enjoys a period of more than 225 frost-free days.

“It’s cool, but it’s not risky in terms of frost danger,” Jones said.

In recent years, Brandborg has gained attention for his superb Gewürztraminer. As recently as 2007, all the fruit came from Bradley Vineyard in Elkton. But demand has risen so much, he now brings in about half his Gewürztraminer from Red Hill Douglas County, another small AVA that is about 20 miles away.

Brandborg does make three wines that use 100 percent Elkton Oregon AVA grapes: Riesling, a white Pinot Noir and his estate Ferris Wheel Pinot Noir. He plans to label all of them with the new AVA. He thinks the two whites could be bottled and labeled as early as April.

This is the second AVA petition Jones has written. He also handled the Southern Oregon AVA, which was approved in 2004. He said he’s also made minor contributions to other AVA petitions.

Brandborg said the Elkton area is ready for growth, and he hears talk of longtime area families preparing to plant grapes. He believes there is room for as many as 5,000s to 6,000 acres of wine grapes in Elkton, based on his casual observations as he drives through the region.

While the government approved the Elkton AVA this week, it becomes official and available for use on labels March 7.

According to the federal government, wineries may use either “Elkton Oregon” or “Elkton OR” on their labels.

Here is a list of Oregon American Viticultural Areas. Those indented are sub-AVAs of the appellations above them.