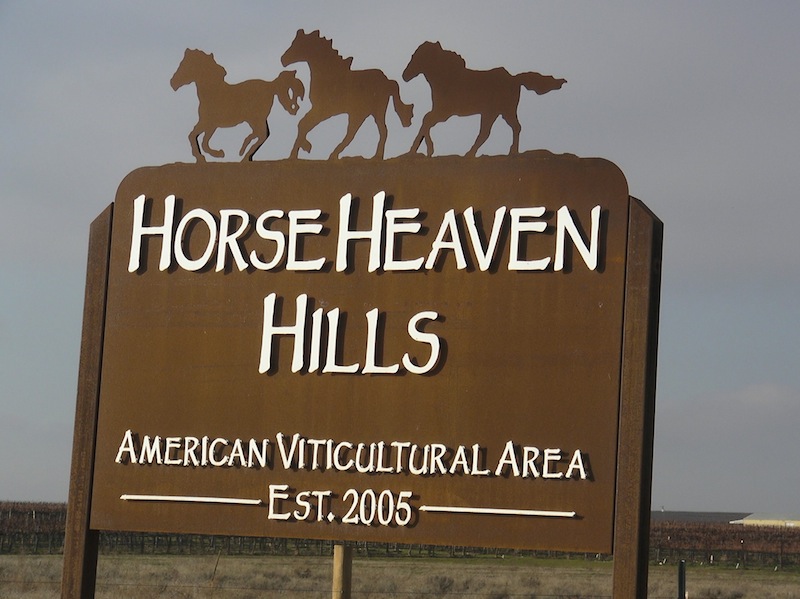 The Horse Heaven Hills is known as a warm region of Washington that grows superb Cabernet Sauvignon. (Photo by Andy Perdue/Great Northwest Wine)

Mike Andrews, who runs Coyote Canyon Vineyard in the Horse Heaven Hills and Coyote Canyon Winery in the Yakima Valley town of Prosser, is proud of the family connection that goes back some 70 years.

His grandfather started farming the Horse Heaven Hills in the early 1940s and was responsible for clearing more than 100,000 acres of sagebrush for other farmers. Soon after, World War II forced the family off the farm because the area was used as a bombing range.

After the war and the family returned, Andrews’ grandfather drilled a well and was the first to irrigate soil in the Horse Heavens Hills, which today is known not only for irrigated wine grapes but also dry-land wheat farming. His grandfather used the water to establish an 80-acre pasture and got into the cattle business.

Andrews’ father followed suit and was known for showing his cattle all over the West in the 1960s.

“The water brought it on,” Andrews said. “We drilled more wells and started planting apples, grapes and other crops.”

In 1980, Andrews’ father, Bob, and brother Rob planted McKinley Springs, one of the earliest vineyards in the Horse Heaven Hills and still one revered by winemakers. Andrews, who graduated from Washington State University in 1973, worked the cattle operation for many years and also grew other crops before turning all of his attention on wine grapes. He planted his first 20-acre block of Cabernet Sauvignon in 1994 for Columbia Crest and continued to add more acres each year to Coyote Canyon Vineyard.

A big expansion from 2006 to 2009 brought the vineyard to its current size of 1,123 acres planted to 26 varieties. Nearly half is Cabernet Sauvignon, the state’s most important red wine grape.

“Cabernet is king,” he said.

About 95 percent of Andrews’ grapes goes to Ste. Michelle Wine Estates, including Columbia Crest, Col Solare and Northstar. Another 4 percent goes to 18 other wineries, and he holds back 1 percent to make 4,800 cases of his Coyote Canyon Winery.

Andrews decided to get into the winemaking side of the business in 2006. He purchased Yakima Cellars, which was going out of business, and kept the tasting room in downtown Yakima. It didn’t work out, so he relocated in 2008 to the Winemakers Loft, a multi-winery building in the Vintners Village in Prosser.

“Downtown Yakima wasn’t the best location,” Andrews said. “But along the highway in Prosser has been great.”

Andrews oversees the winemaking operation with the help of John Gabriel, who has been the winemaker since 2009. Last year, Gabriel moved to California, and he returns to Washington on a regular basis while Andrews handles the day-to-day duties along with the farming 25 miles to the south.

In recent years, Coyote Canyon’s wines have gained a lot of attention, both on the red and white sides. Andrews was the first to plant Albariño in Washington, when he put vines in the Horse Heaven Hills in 2006. He actually planted them for a winemaker who ended up backing out of the deal. So Andrews kept the grapes beginning with the 2008 vintage and has made some of the finest Albariño anywhere. His 2011 sold out Aug. 1, so two weeks ago he bottled the 2012 to get it to a waiting marketplace.

Andrews has become enamored with other Spanish varieties, too. He grows Tempranillo and Graciano, and he is pleased with the wines that result. He also grows most of the Rhône (Cinsault, Counoise, Grenache, Marsanne, Mourvèdre, Roussanne, Syrah and Viognier) and Bordeaux varieties (Cabernet Sauvignon, Cabernet Franc, Malbec, Petit Verdot and Merlot). He even has German (Riesling and Gewürztraminer) and Italian (Zin, Nebbiolo and Barbera) varieties, along with a few others.

Coyote Canyon has three tiers for its wines: The Downtown Red and White are the only labels leftover from the winery’s Yakima Cellars legacy. The Coyote Canyon tier includes Andrews’ regular releases, while the H/H Estate is the reserve-level wines.

The H/H label harkens back to Andrews’ cattle days, as the operation was called the Horse Heaven Hereford Ranch. Each of the wines in that tier have names that mean something special to Andrews. The GW Smith Malbec honors his grandfather, who started the farming operation back in the ’40s. The Robert Andrews Mourvèdre is named for his father, who remains a partner in the farming operation. And he named his Rioja-style blend, Michael Andrews Red, after himself.

A Bordeaux-style blend called Bozak Red is named for his main bull, which weighed a hefty 2,600 pounds. And Andrews’ award-winning Cabernet Sauvignon is called Big John Cab. Back in 1973, the family sold an 18-month-old bull that weighed 1,850 pounds for $23,000. It was sold at the Golden Nugget in Reno, Nev., to a man known as Big John.

Today, the fourth generation has joined the operation, as Andrews’ son Jeff runs the financial end of the business and has brought a lot of new technology. A new computer data system has mapped out the vineyard, right down to how many clusters are on each vine.

The Horse Heaven Hills are known as a warm growing region, and Coyote Canyon is in one of the hottest spots. Andrews noted he will accumulate 3,600 growing degree days, while a location just a mile away accumulates 2,900 (still plenty warm for growing Cab).

All that heat didn’t help in November 2010, when an early and unexpected freeze devastated vineyards in the Horse Heaven Hills. For Andrews and other growers, it made 2011 a particularly difficult year. Of his 1,123 acres, Andrews had to cut 650 acres to the ground and retrain it up for the 2012 crop. Much of that was younger vineyards from his 2006-2009 expansion. Of his older vines, about 300 acres bore fruit – only about a half-crop – and the rest produced no grapes.

Fortunately, Ste. Michelle released a block of grapes back to Andrews so he would have fruit for his own winery.

Coyote Canyon’s wines are sold in Washington and Idaho, as well as at the tasting room in Prosser. For more information, go to the website or call 509-786-7686.