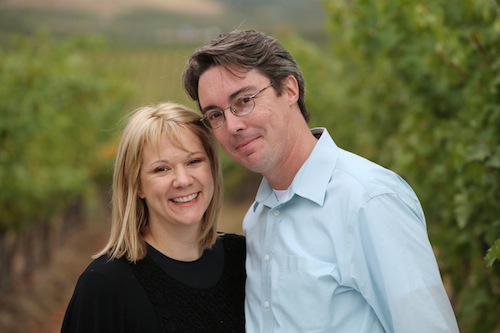 Josh and Lisa Maloney are launching Maloney Wine, a boutique Washington winery that focuses on one wine per year. (Courtesy of Josh Maloney)

MATTAWA, Wash. – Following in a long line of former Ste. Michelle winemakers, Josh Maloney is making a Washington wine under his own name.

Maloney, who spent six years at Chateau Ste. Michelle as its red winemaker, left in July 2011 to take over as head winemaker at Milbrandt Vineyards and Wahluke Wine Co. He produces more than 60,000 cases of wine under the Milbrandt label and also oversees the custom-crushing operation – which does many times more than that for other wineries.

Now, Maloney is launching his own small operation with his wife, Lisa. It will be called Maloney Wine, and the first vintage is in barrel. 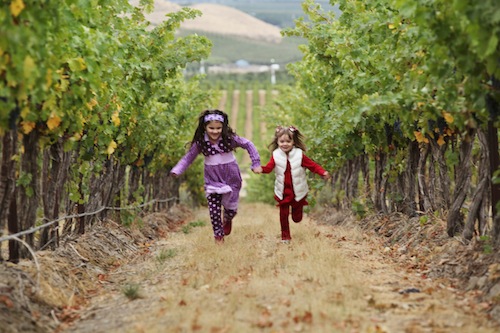 Originally, the Maloneys were going to call their winery Uprooted because between the two of them, they have lived at more than 30 addresses – without either being from military families.

He and his wife recently realized they’ve now lived in Washington longer than anywhere else in their lives. And as they put down roots in Washington wine country, their children will grow up in an environment that is exactly the opposite of what they faced, a life where they likely will live in just one location until they go to college.

When the Maloneys filed for a trademark on the name, they discovered a California winery already owns the name “Uproot” and will be releasing a wine under that label next year. So they went with Maloney Wine instead.

This is something Maloney could not have done while he was employed at Ste. Michelle, as the company has policies about its employees starting wineries or consulting services on the side.

Looking at winemakers who came before him at Ste. Michelle, one can see many who took the path Maloney is embarking on. Such names as Kay Simon (Chinook), Wade Wolfe (Thurston Wolfe), Mike Januik (Januik Winery), Charlie Hoppes (Fidelitas) and Ron Bunnell (Bunnell) are some of the most prominent.

When Maloney was hired by Milbrandt, it was with the stipulation that he could work on his own small side project, something owner Butch Milbrandt was only too happy to accommodate.

He went on to say that with the amount of wine his company makes, there’s rarely room for too much experimentation, so this provides Maloney with a creative outlet.

“It’s nice for winemakers to do their own thing, too, something that’s theirs,” he said.

Maloney’s project is different than just about any other winery in Washington. Each year, he will make Cabernet Sauvignon from one vineyard. The next year, it will be a new vineyard – and he has no plans to ever repeat a vineyard.

And each year, he plans to use a new technique, dependent upon what each particular vineyard allows for.

“There are a lot of reasons I’m doing it this way,” Maloney said. “Unlike the European model that is built on estate grapes each year, Washington’s reputation is on the vineyards, the fruit sources. Here, the vineyard is the primary focus in many cases. I don’t believe you can use one set of winemaking techniques and bring out the best in that vineyard.”

The self-described “wine nerd” said such variables as yeast strains, fermentation techniques and barrel treatment can accentuate the character of a vineyard. He hopes to coax what he thinks will be each vineyard’s true character out of each wine.

He plans to do a data dump of every step he takes with each wine, right down to malolactic fermentation data.

“Everyone will be able to see exactly what I did and why I did it,” he said. “Talking to wine nerds like myself, they find that information overload really enjoyable. That’s the person I want to make wine for.”

First wine will be from Elephant Mountain 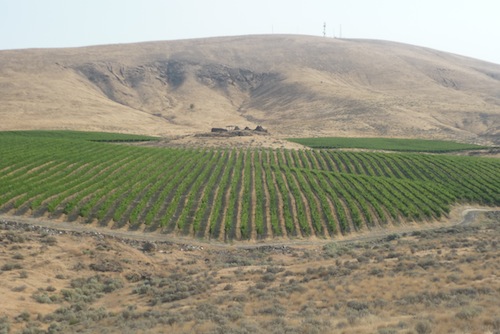 Maloney’s first wine will come from the 2012 vintage, using Cabernet Sauvignon from vaunted Elephant Mountain Vineyards in the Rattlesnake Hills. He has been working with grapes from Elephant Mountain since 2006, so he feels comfortable with the direction he wants to take that wine.

“Elephant Mountain has a lot of qualities that typify what I love about Washington reds,” he said. “It can be monstrously tannic if you don’t treat it properly. It has firm acidity. It doesn’t tend to get overripe, so it has some herbal character. It just sings, ‘Washington Cab.'”

Maloney has four barrels – enough for about 100 cases – which he is making in a corner of Wahluke Wine Co. in Mattawa.

“I’m funding all of this out of my own pocket,” he said. “I’m treating it as a very expensive hobby.”

He expects to bottle and release the wines no earlier than 2014.

In 2013, he plans to use grapes from Scootney Flats on Red Mountain, a young vineyard he hasn’t worked with yet. To learn about it, he is getting together with fellow winemakers who do, looking through their winemaking notes and determining what direction he wants to take.

Maloney has no intention of ever making more than about 500 cases per year, and he will initially sell the wines through a mailing list only. Though he hasn’t set a price yet on the wine, he thinks it will be $40-$50 per bottle.

“This is fun,” he said. “This is what drives me, what satisfies the creative urge to do something for my own reasons.”

For more information, go to maloneywine.com