Rollin Soles steps back at Argyle, forward at Roco

Soles has been Argyle’s head winemaker since the winery launched in 1987, making some of Oregon’s best Pinot Noir, Chardonnay, Riesling and sparkling wine.

With his new consulting role at Argyle, Soles will have the freedom to devote most of his efforts to Roco, the winery he launched with his wife, Corby, a decade ago. Roco is near Newberg in the Chehalem Mountains American Viticultural Area, where Soles planted a 7-acre vineyard called Wit’s End.

“Roco is 10 years old,” Soles told Great Northwest Wine. “I’ve been fortunate to be at Argyle and slowly chip away at Roco.”

Soles built a winemaking facility for Roco in 2009 and opened a tasting room last Thanksgiving.

He and Corby now share an office, making this the first time they’ve worked together professionally.

“We look across at each other and just laugh,” Soles said. “It’s just a blast.” 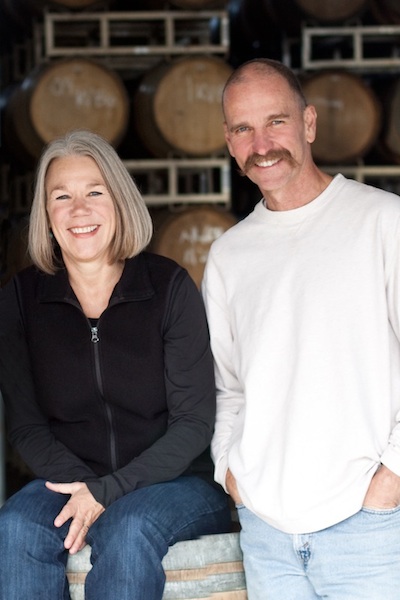 Corby and Rollin Soles launched Roco a decade ago. With his change in status at Argyle, Rollin now has more time to devote to his winery. (Courtesy of Roco)

Soles makes 3,400 cases of wine, most of it Pinot Noir with just a bit of Chardonnay. Somehow, he’s now selling Roco in 33 states.

“Various wholesalers started calling up during the recession wanting my wine,” he said with a laugh.

Perhaps it’s his reputation as one of Oregon’s finest winemakers. Perhaps it’s all the regional and national recognition Roco wines are getting from critics. Regardless, it is not surprising that distributors have come calling.

One wine that is not in Soles’ repertoire at Roco is sparkling wine, something he’s made famous at Argyle.

“I love bubbles,” Soles said enthusiastically. “Sparkling is the most amazing wine there is. It’s one of the most difficult wines to make – and make right. It’s cutting-edge and exciting.”

In other words, don’t be surprised if he starts making sparkling wine at Roco, too.

Klostermann takes over at Argyle

Meanwhile, Argyle has tapped Nate Klostermann as head winemaker. He joined Argyle in 2005 as an enologist at the age of 23.

“I was lucky to have hired Nate,” Soles said. “He’s turned out smarter than I am with the unusual skill sets of a fine wine palate while being calm under pressure – important when you need an understanding of both still wines and the incredibly complex sparkling wines that Argyle does so well.”

Klostermann is excited by the opportunity – and humbled by the promotion.

“I’ve grown up at Argyle and am grateful for the rare opportunity to work alongside masters in their trade,” he said. “I have no intention of filling Rollin’s shoes – that’s impossible. Instead, I’ll continue a life-long journey of learning as we work together to honor the Argyle tradition.”