Anderson, 73, is the founder of the vaunted viticulture and enology program at Walla Walla Community College. He has announced he is retiring June 14 – for the fourth time.

“I’ve been associated with the community college since 1977,” said Anderson, who also is co-owner of Walla Walla Vintners, one of the valley’s oldest and most respected wineries. “I’ve done this gig three different times and retired three different times. It’s time to step aside for someone who can take this further into the future than I’m able to do.”

Anderson developed and launched the V&E program – the oldest in the state – in January 2000 and built it into one that has graduated hundreds and is lauded as one of the finest anywhere. Today, the program oversees 6.5 acres of vines and has a 7,000-square-foot working winery – College Cellars – that produces 3,500 cases of award-winning red, white, pink, sparkling, fortified and ice wines. 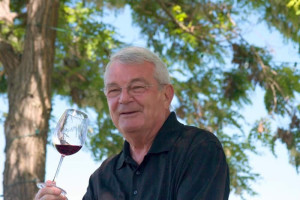 And it’s time for him to get back to his day job at Walla Walla Vintners.

After getting the program going and the building constructed, Anderson found his successor in Stan Clarke, a longtime winemaker, wine writer and educator. He knew it was good hands, so he retired in 2006. A year later, Clarke died unexpectedly, so Anderson came out of retirement.

Then the college hired Valerie Fayette, who had been with Chateau Ste. Michelle. She moved on in 2011, so Anderson came back again, with plans to stay just long enough to find another director. But three months later, budget cuts at the state level stopped the search because the position was no longer sustainable.

“Now things are looking better,” Anderson said. “Now we can get a good person in here, and I can be free to go back to work at Vintners.”

The V&E program’s credentials – based on those who have passed through its doors – are impressive:

Currently, the program has 60 students with an average age of 34. More than half of next year’s class already is filled.

Anderson said he designed the program with the industry in mind.

“Ours isn’t a wine science program,” he said. “It’s a wine-ready program. We’re educating those with other degrees who have led other lives and now want to get into the wine industry.”

“We provide something for the industry that is needed now,” he said.

His advisory group meets with him every six months to discuss what adjustments the program might need.

And now he is ready to step away – again – from perhaps the most fulfilling accomplishment of his life.

“This has been a fascinating and fun job,” he said. “It will be hard for me to leave it, to no longer be a part of students’ lives, but it’s time for someone with greater energy and better ideas.”

And if he’s ever asked to come back a fourth time?

“If things blow up again, I’ll be back here because it’s in my heart.”

Anyone interested in discussing the position should email Anderson at myles.anderson@wwcc.edu