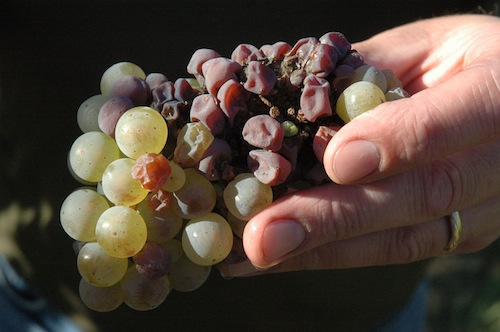 One never knows where inspiration will come from, but Idaho winemaker Greg Koenig remembers exactly how he got the idea to attempt a Total Botrytis Affected-style Riesling.

“I had read that Wild Goose Vineyards in British Columbia had done a TBA, and I wondered if we could ever do one in Idaho because of the dry conditions,” said Koenig, owner of Koenig Winery in Caldwell.

Wild Goose first made a TBA in 2004. It took six years before the conditions were right for winemaker Hagen Kruger to make another TBA at his Okanagan Falls winery. Harvest came at 39 brix on Oct. 18, 2010.

Meanwhile, botrytis was blooming in the Snake River Valley.

“I thought to myself, ‘Man, this is happening. We’re going to be able to try something,” Koenig said. “I’ve got to tell somebody.”

On Nov. 9, 2010, Koenig harvested the sweet and shriveled clusters that ended up as his 2010 Botrytis Single Berry Select Late Harvest Riesling.

“The botrytis makes a tremendous late-harvest wine,” Koenig said. “The big wineries that reject Riesling because of botrytis are making a huge mistake.”

Koenig, 42, proved that. His TBA earned a gold medal and best dessert wine at the 2012 Idaho Wine Competition and then a Platinum at the 2012 Platinum Judging for Wine Press Northwest magazine.

TBAs get their name from their European origins. “Trockenbeerenauslese” – TBA for short – wines are made in Germany and Austria and are among the most expensive and collectible dessert wines made. In France’s Alsace region, a similar style of wine is known as “Selection de Grains Nobles” or SGN, which means “Selection of Noble Berries.”

Chateau Ste. Michelle in Woodinville, Wash., made history as the first winery in North America to produce a Total Botrytis Affected-style Riesling with its 1999 Eroica Single Berry Select. Aside from 2002-2004, Chateau Ste. Michelle has created at TBA every vintage since. The wines retail for $200 per bottle with a extremely limited production each vintage, typically 75 cases to wine club members.

Conditions also were ripe in 2010 on Red Mountain for Kiona Vineyards Winery in Benton City, Wash., so the Williams family created a Single Berry Select Botrytised Chenin Blanc from estate fruit. Kiona produced 70 gallons, about 50 cases, with a retail price of $80 per bottle.

Koenig knows the market in the Snake River Valley, so he sells his for $30.

“There wasn’t even enough for me to offer as a wine club selection, and we never really announced it or sent an email,” Koenig said. “We started selling it in Thanksgiving and let people taste it alongside our ice wine, which is $10 a bottle cheaper. I want people to come out and learn about botrytis and the process.”

Most people who sample the wine have little idea of the effort involved.

“The weather wasn’t super cold, probably in the mid-30s, so it’s not like ice wine picking,” Koenig said. “The clusters we did got were really, really infected. I’d say at least 70 percent affected. They were shriveled and very raisiny, and I had the pickers try some of these berries that were shriveled. Then I saw them eating quite a few as we were going along. And some clusters went home to my kids, who like raisins. They loved them except for the seeds.” 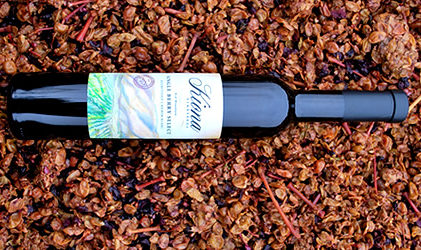 Koenig was prepared for the opportunity, having ordered Heiligenstein, an Austrian yeast specially developed for cold fermentations.

“That yeast worked really well and the flavors came through,” Koenig said.

The success of the 2010 Botrytis Single Berry Select Late Harvest Riesling prompted Koenig to dream of creating another in 2012.

“I had hope it was going to happen again this year,” Koenig said. “Botrytis stopped at 10% because we had one of the driest summers ever. There’s just not enough ambient humidity to keep it going. Inevitably, there’s a bit of botrytis in ice wine, but the yield would be crazy small. You have to let them hang until they are frozen and the concentration of sugar would be really intense. It would be pretty cool.”