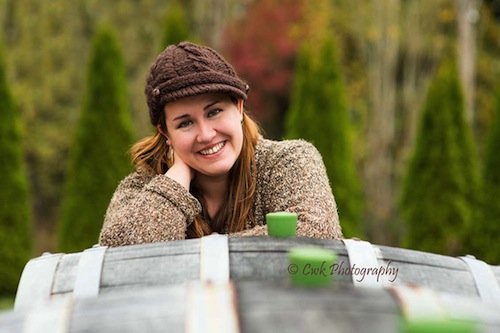 Darcy Pendergrass, winemaker at Amity Vineyards, has launched Tartan, her own small-production winery. (Courtesy of Tartan)

Pendergrass, who has been owner Myron Redford’s head winemaker since 2008, is producing small amounts of wine under the Tartan label, limiting production to 300 to 500 cases per year.

Her first releases are the 2006 and 2007 vintages of Tempranillo and Dolcetto from Willamette Valley grapes.

Pendergrass, who grew up in the southern Willamette Valley, attended the University of Montana, where she earned a degree in microbiology. She spent some time in Montana after college running a hotel and skiing before heading back to Oregon, where she held aspirations of getting into craft brewing.

Instead, Pendergrass came back to Oregon, took winemaking classes at Chemeketa Community College and found a job in 2001 in the tasting room at Amity Vineyards in the Eola-Amity Hills. She quickly worked her way into the lab and finally the cellar, learning alongside one of the legends of the Oregon wine industry. Redford launched Amity in 1976 and has been one of the state’s most important – and outspoken – winemakers.

” ‘Lively’ is a good description of him,” Pendergrass told Great Northwest Wine a year ago. “I know his palate pretty well, and I do know what not to put in front of him. My goal is to make a wine that we can both agree on, and our palates are very different.”

Redford learned his winemaking from the legendary Lloyd Woodburne, who started Associated Vintners (now Columbia Winery) in the early 1960s. Redford purchased a vineyard in 1974 and launched his winery two years later.

Pendergrass’ development as a winemaker has allowed Redford to spend more time in the vineyard.

Pendergrass’ two wines under Tartan come from Sunnyside Vineyard, a favorite of Redford’s throughout the years for Pinot Noir. All of the Tartan wines retail for $20.

The winery name is a nod to her Scottish heritage.

Pendergrass will continue to be Amity’s full-time winemaker, and Redford has been so supportive, he even sent an email announcement to his winery customers:

“We have watched Darcy grown and evolve,” he wrote. “It is exciting to be able to help her announce Tartan. We encourage you to experience these lovely wines.”