The wine, a new style for owner Rick Small and winemaker Kevin Mott, is a blend of Mourvèdre (57%), Grenache (29%) and Syrah. Small described it as being inspired by France’s Provence region.

The grapes come from Woodward Canyon’s estate vineyard, high in the hills on the northern edge of the Walla Walla Valley appellation.

Small said he has been experimenting with Mediterranean varieties, clones and rootstock for nearly a decade in his estate vineyard, but the 2010 vintage finally brought to fruition his and Mott’s vision for this red blend.

Small said the percentage of the blend will undoubtedly change from year to year, though the components will likely remain. 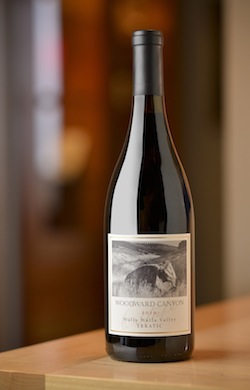 The wine is named for a granite boulder that was rafted to the estate vineyard in an iceberg as a result of the outburst floods during last ice age some 15,000 years ago. An ice dam on the Clark Fork River in what is now northern Idaho created a temporary lake called Glacial Lake Missoula that backed up all the way to the city of Missoula, Mont.

When the ice dam failed, the resulting floods drained the lake and sent the water across Eastern Washington, scouring the land, creating coulees and leaving granite boulders native to Montana and Alberta – but not basalt-laden Eastern Washington – throughout the Columbia Valley, Columbia Gorge and Willamette Valley.

Scientists believe Glacial Lake Missoula formed as many as 100 times. The resulting outburst floods helped shape the wine regions of the Columbia Valley and has even affected how the northern Willamette Valley appellations have been defined.

Woodward Canyon Winery began in 1981, making it the Walla Walla Valley’s second-oldest winery. Small, who owns the winery with his wife, Darcey Fugman-Small, was the winery’s longtime winemaker before handing that job to Mott several years ago.