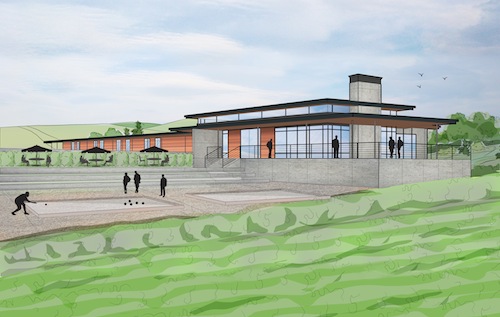 BEAVERTON, Ore. – Ponzi Vineyards, one of Oregon’s oldest and most innovative and progressive wineries, is getting ready to unveil a new tasting room.

Ponzi Vineyards was founded nearly 40 years ago by Dick and Nancy Ponzi. The second generation is building a beautiful new tasting room atop a hill near the winery’s gravity-flow production facility near the northern Willamette Valley town of Sherwood on Chehalem Mountain.

Maria Ponzi, director of sales and marketing for Ponzi, said her husband, Brett Fogelstrom, has served as the designer and general contractor on the project. He operates Fogelstrom Design/Build.

“He and I have worked very closely to create a modern facility that will set the bar for Oregon wine country destinations,” she said.

The new Ponzi tasting room is expected to open during the first half of June. Laurel Dent, marketing manager for the winery, said she hopes for a soft opening Memorial Day, a big event weekend for all Willamette Valley wineries.

The Ponzi family has been setting the bar since arriving in 1970. Dick and Nancy Ponzi planted their vineyard in the northern Willamette Valley and have never slowed down. In 1984, they launched BridgePort Brewing, Oregon’s first craft brewery and brewpub. They sold it in 1995.

In 1998, the Ponzi Wine Bar opened along Highway 99W in Dundee. It features Ponzi wines as well as many other top Oregon producers, a remarkable show of collaboration. A year later, the Ponzis opened the Dundee Bistro next door. It quickly became one of the top restaurants in the heart of Oregon wine country – featuring one of the state’s best wine lists.

In 2004, Ponzi began using screwcaps, among the first premium Pinot Noir producers to do so.

All of this comes in addition to the steady stream of accolades from wine critics regionally, nationally and globally. 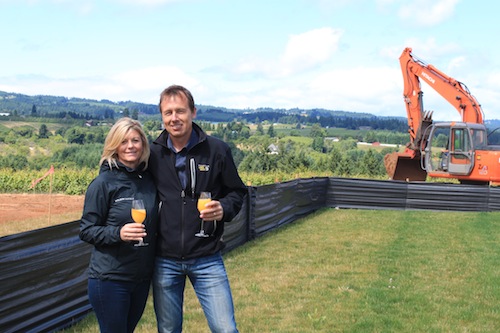 The next step for the Ponzis is their new tasting room.

“It transports us from the original humble beginnings of our garage and family home, which served us well for more than 40 years,” Maria Ponzi said. “The new tasting room’s sophisticated lounge will feature table-side wine service, an antipasti menu, stunning views and a fireplace, creating the ultimate wine tasting experience.”

Ponzi, who runs the winery with her winemaking sister, Luisa Ponzi, said the history of the winery’s humble beginnings have helped motivate them to continue to push forward.

“As we look back over the past four decades of accomplishments, we reflect on where it all began,” she said. “From producing and and selling our wines out of the garage to an incredible hilltop tasting room and winery, I am proud of how the brand has grown.”