Wine grape vines are waking up across Washington’s Columbia Valley, and growers could not be more pleased.

“I’m plenty happy,” said Mike Sauer, owner of Red Willow Vineyard west of Wapato in the Yakima Valley. “We haven’t had it this early in several years.”

The first sign of grape vines waking up from their winter slumber is called bud break, when baby leaves begin to emerge from the tiny buds. By early June, small grape clusters will flower, then the fruit will begin to grow, and it will ripen through June and July. By early August, the grapes will start to change color, and harvest will take place in September and October.

Paul Champoux of Champoux Vineyards in the Horse Heaven Hills south of Prosser said his vines are at least a week ahead of the long-term normal, and Mike Andrews of nearby Coyote Canyon Vineyard reported similar progress.

Andrews said his vineyard’s average date for bud break is around April 10, and in the past few years it has been as late as April 20. He is seeing a few tiny leaves popping out of his vines and expects much of his 1,123 acres to awaken by this weekend.

Andrews said one danger is spring frost, which can damage the tender leaves. But he and other growers said the problem is slight.

“Once you have bud break, you do run a risk,” he said. “If it gets below freezing for more than a couple of hours, you might run into some damage.” 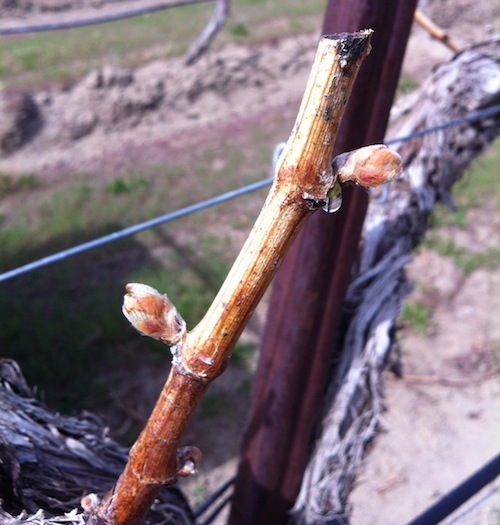 Derek Way, vineyard manager at Sagemoor Vineyards north of Pasco, said he has frost-control measures in place, including overhead sprinklers that can help temporarily raise the temperature in the vineyard.

“Frost is always a concern,” he said. “But this doesn’t scare us a whole lot.”

Rather, it gets the 2013 vintage going on the right track, said Dick Boushey of Boushey Vineyards near Grandview.

“A good spring means you can weather cooler periods,” he said Wednesday as he walked through a vineyard he manages on Red Mountain near Benton City. “It gives you more options.”

Boushey, who has been growing wine grapes in the Yakima Valley for more than 30 years, said this year reminds him of 1992, characterized by a warm spring, early bud break and a long growing season.

Boushey hasn’t seen any full bud break at his Grandview vineyard yet, though he sees signs it is coming in his Merlot. At Col Solare’s vineyard on Red Mountain, he said Cabernet Franc is showing signs of bud break.

Kevin Corliss, vineyard operations director for Ste. Michelle Wine Estates, reported bud break in Chardonnay and Cabernet Franc at some of the Columbia Valley’s warmest sites, adding that it is about a week earlier than normal.

“This is moving pretty fast from one stage to another,” he said. “We’re starting to see leaves form. It’s been pretty fast because of the warm temperatures. It gives us all good feelings.”