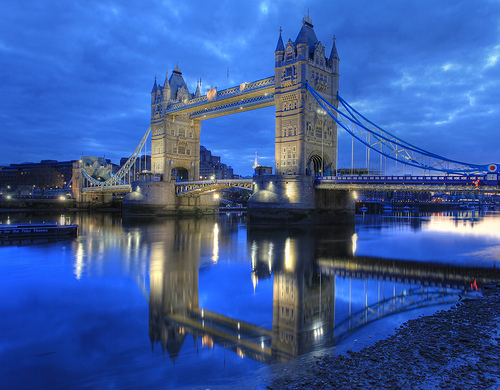 London Bridge is reflected in the River Thames in London. (Photo via Flickr, click image for credit)

LONDON – The next time you head to the United Kingdom for vacation or business, there is little need to pack along a bottle of Washington wine to ensure you have a taste of home with you.

“The U.K. is one of the most important markets globally because it has influence beyond its borders,” Stone told Great Northwest Wine. “It’s not the volume we sell there. It’s having wine in one of the most influential markets in the world.”

Precept Wine in Seattle sells the most Washington wine in the U.K., said Heidi Witherspoon, communications director for the state’s second-largest wine producer.

“We have a great market there,” she said.

Witherspoon said Precept will sell 10,000 cases of Washington Hills Merlot and 2,500 cases of Pinot Gris this year in the U.K. It also sells its popular Chocolate Shop wine in the U.K.

Andrew Will Winery on Vashon Winery sells about 60 cases of wine per year in the U.K. – and has done so for 15 years.

“I am finding as I travel in Europe as well as the U.K., Andrew Will is liked because it seems European to them,” said owner/winemaker Chris Camarda, who travels to London annually on sales calls. “I just attended ProWein in Dusseldorf, where I heard that a lot.”

Ste. Michelle Wine Estates in Woodinville, Washington’s largest wine producer, sells between 6,000 and 8,000 cases per year from such brands as Chateau Ste. Michelle, Eroica, Col Solare and Stag’s Leap Wine Cellars. Stag’s Leap is in Napa Valley and is co-owned by Italian winemaker Antinori. Ste. Michelle officials said their focus is on trade and top independent retailers, rather than the chain stores that dominate the U.K. market.

Leonetti Cellar sells three cases each of its Cabernet Sauvignon, Merlot, Sangiovese and Reserve, as well as five cases of its Figgins Estate Red.

Seven Hills Winery sells about 100 cases per year, said owner/winemaker Casey McClellan. He mentioned that his 2011 Talcott Vineyard Viognier was sold to British Air for use in its first-class cabins on North American flights.

And Gramercy Cellars sells about 500 cases of wine per year in the U.K., said owner/winemaker Greg Harrington.

“It’s actually been a surprisingly awesome market for us,” he told Great Northwest Wine.

Duck Pond Cellars in Dundee, Ore., sells about 250 cases of its Washington wine in the U.K., said Amber Fries, director of communications, including its Chardonnay, Merlot and Syrah. The Fries family also owns Desert Wind Winery in Prosser, Wash., and Desert Wind Vineyards on the Wahluke Slope, the source of its Washington grapes for both wineries.

Other wineries selling wine in the U.K. include Powers Winery and Badger Mountain Vineyards in Kennewick and K Vintners in Walla Walla. 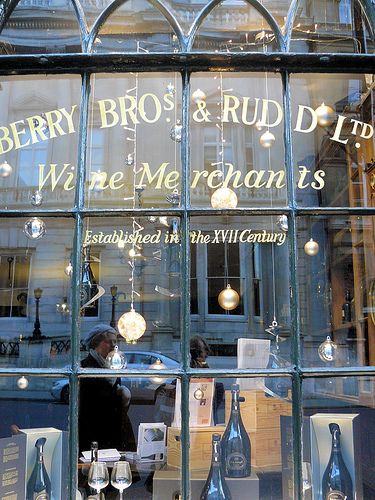 The U.K. is a globally influential wine market. (Photo via Flickr/click image for credit)

Stone said the wine commission’s focus in the U.K. is on media relations rather than pure traditional marketing. London is home to some of the world’s most influential media, including several newspapers and Decanter magazine.

It’s also the location of The Institute of the Masters of Wine and has traditionally been a powerful market for European wines, particularly from France.

And Jancis Robinson, one of the world’s most important wine critics and journalists, is based in London. She is the author of several books, including the influential Oxford Companion to Wine. She writes a weekly wine column for the Financial Times and recommends wines for Queen Elizabeth’s personal wine cellar. No word if it includes any Washington wines.