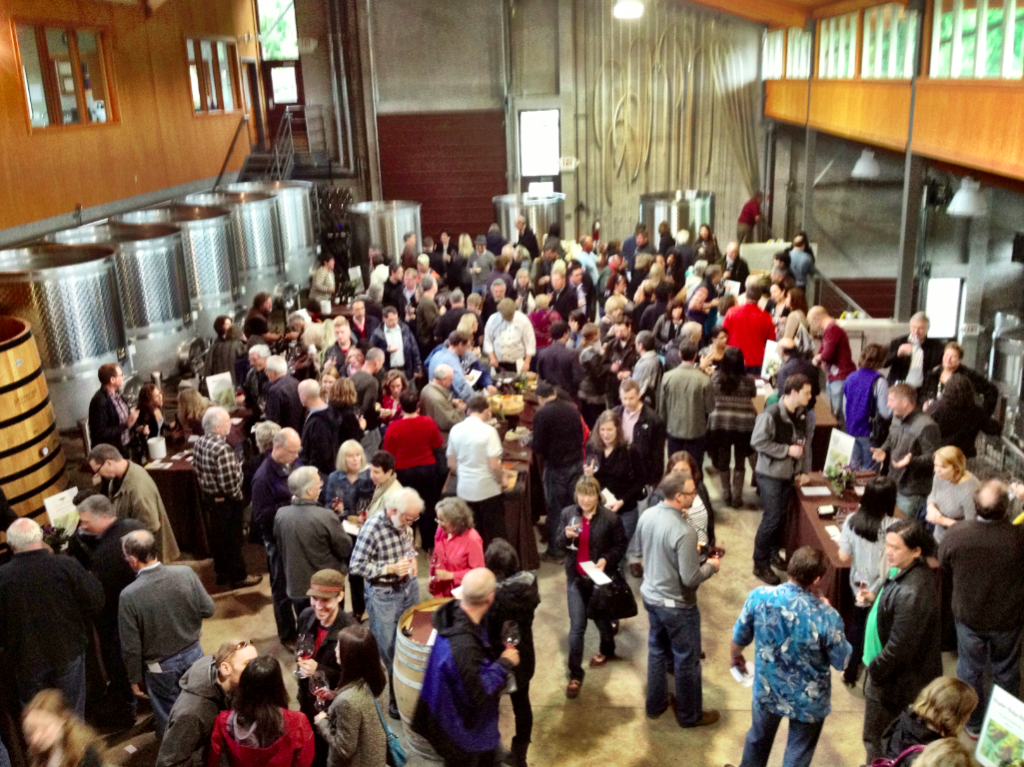 NEWBERG, Ore. – Few wines in the United States are as prized as Pinot Noir from Shea Vineyard, which explains why consumers and nine wineries gathered Saturday at Penner-Ash Wine Cellars in Newberg, Ore., to meet Dick Shea and celebrate some of the famous wines he helped create.

“I was very flattered, and then to have it sell out like this was more than flattering,” Shea told Great Northwest Wine. “It’s very cool for people to appreciate what we’re doing and that people are into wine this much. These are passionate people, and they are spending a whole day and a good deal of money.” 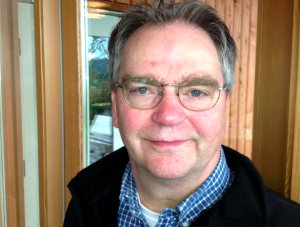 Dick Shea traded his job on Wall Street back in 1989 to become a grape grower in the Willamette Valley. Today, Shea Vineyard is arguably the most famous vineyard in Oregon. (Eric Degerman/Great Northwest Wine)

Shea, 66, began planting his iconic and eponymous vineyard in 1989, inspired to leave Connecticut and his Wall Street job after experiencing the Adelsheim Vineyard 1986 Elizabeth’s Reserve Pinot Noir. Shea Vineyard is in what is now the Yamhill-Carlton American Viticultural Area, about a five-minute drive from David Adelsheim’s estate winery.

“When I first came out, the reputation of Oregon didn’t extend much beyond the borders of Oregon,” Shea said. “Now we’re selling (Shea Wine Cellars bottles) in China and Germany and Sweden. They came knocking on our door, and it wasn’t a Shea thing. They wanted a high-end Oregon Pinot.”

He and his wife, Deirdre, created Shea Wine Cellars in 1999, which receives 25 percent of Shea Vineyard’s production. Their list of winery clients runs more than 20 deep for the Pinot Noir off the 140-acre site, and he credits famed winemaker Ken Wright and wine critic Robert Parker with creating a following for his vineyard.

“In 1994, Ken Wright discovered something that just intrigued him, so he signed up to buy our fruit,”  Shea recalled. “Then he left Panther Creek to start his own Ken Wright Cellars, and they both wanted to do vineyard designates. They were the first vineyard designates we had. Parker rated them No. 1 and No. 3 from a vaunted vintage, and we were off to the races.” 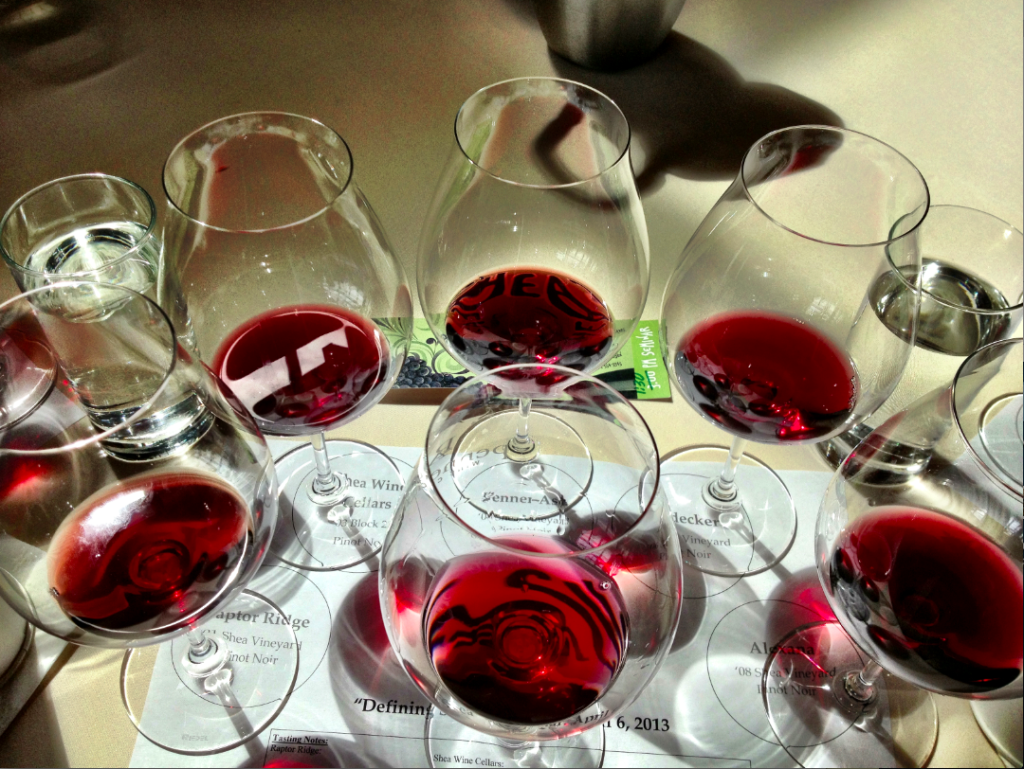 Shea Vineyard’s marine sediment soils helps account for the blue/black fruit and tannin structure, which is markedly different that the classic high-toned red fruit profiles of Pinot Noir produced from the red, volcanic soils Dundee Hills just a couple of miles to the southeast.

“I still don’t truly consider myself a farmer, and when people ask me to describe a wine and what’s going on with it, I think of things that come from the vineyard,” Shea said. “When I found the land, I got an adviser that did really well, and I’ve got a really good manager who might be a little weak on computer skills, but he’s superb with people, he knows how to keep the crews motivated, and he understands the plants.”

There have been significant growing pains at Shea Vineyard, which led to Shea eventually buying out his two original partners in the early 1990s.

“We had one ton per acre of fruit on the vines that sold for $600 a ton, and it cost us $2,400 a ton to farm it,” Shea said. “At that point, we were selling our fruit to Firesteed and other people, who were making what was then an $8 Pinot. It was mixed in with other things, so there was no tracing of whether it was any good or not.”

Fight with phylloxera began in 1995

Then, in 1995, soon after Wright began to notice the potential of Shea’s site, phylloxera was discovered in the vineyard. In hindsight, perhaps the low yields that chased out the last of Shea’s partners were the harbinger of the small root louse that virtually every corner of the wine industry fears. 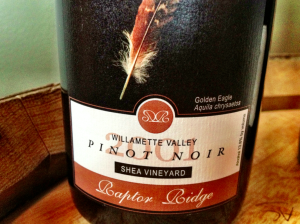 Scott Shull’s Raptor Ridge 2001 Shea Vineyard Pinot Noir came from a block of that had not yet been affected by phylloxera. (Eric Degerman/Great Northwest Wine)

“In my opinion, the original plantings of Shea Vineyard would tend to lean toward red fruit,” Shull said. “The Dijon clones and grafted vines that we all work with now are putting more muscle and meat into the nature of the wines.”

During the seminar, Shea shared some of his painful experiences dealing with phylloxera. And he’s one of the few folks in the Northwest wine industry who openly discuss the topic, which he believes is safely behind him.

“It’s a little like people wanting you to talk about your cancer, you know? ‘Well, I don’t want to talk about it,’ ” Shea said. “It’s easier now that it’s gone, and I must say that I was more proactive than some. There are people who have tried to live with it by nutrition and things like that. Some people simply stuck their head in the ground. Our approach is when the plants got sick, or a section got sick, you just cut it down and replant on stuff that will never get phylloxera.

“There are other diseases, but nothing that has ever devastated vineyards like phylloxera has. So knock on wood,” Shea continued. “I just wanted to get it behind me. I did get some advice from California, where there was a real phylloxera devastation in California in the 80s – a decade before we got ours. Believe it or not, accountants who advised a lot of vineyards, told me, ‘Be proactive. Don’t sit back and let it happen to you. If you get to a point and everything goes and you have no income, unless you are really wealthy you get behind the 8-ball and you can’t get out of it. Replant and you’ll have young vines producing income while others are going out. And that’s what we did.” 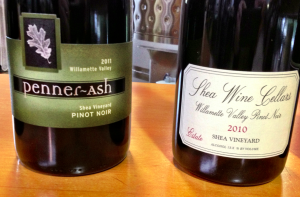 Shea noted his final re-planting was done in 2008.

“I’d say maybe 20 percent of the vineyard was the most that was down at any point in time,” Shea said. “We had 100 acres planted, and I bought another 40, and I raced out and planted that so that I would never be without enough income to keep it going. There are people who have had to give up their property, and it’s much worse in California. Phylloxera spreads much faster down there. One godsend we had here is that it moves slowly, and that made it easier for me to work my way through it.”

Once his new plantings receive enough irrigation to become established, they become dry-farmed for the remainder of their lives, Shea said. And the new rootstock throughout allows Shea Vineyard to sidestep the worries of having workers and visitors bring phylloxera on their footwear.

“That’s important if you are own-rooted and you don’t have it yet because then you have a hope of keeping it out,” Shea said. 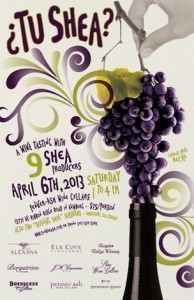 The three-hour Tu Shea event included each winery pouring its latest release of Shea Vineyard-designated Pinot Noir. Recipe Restaurant in Newberg catered the event, and its offerings included meats smoked with cuttings from Shea Vineyard. It’s a lifestyle and business that appears to keep Shea younger than his age would indicate, but he’d like to step back from the daily grind of his second career just a bit.

“I was working on Wall Street, a trading floor-type person, and that’s a young man’s game,” Shea said.  “Well, I’m 66. Maybe by now I’d be playing golf — except I’m not really a golfer. Maybe fishing. But I always thought that I’d continue to be involved professionally in whatever I had been doing and still have an economic interest in a place where I’d go every day and work. This is a great thing for that.”

And if a winemaker sends an email inquiring about Shea Vineyard fruit, that request still goes directly to the owner.

“My wife and I would like to get the next generation involved, and our son just joined us, and we’d like to build up some other managers so we’d work a lot less,” Shea said. “I’m not looking to totally separate from this. I really enjoy this, but right now it’s a 6 1/2-day-per-week thing.”