WALLA WALLA, Wash. – The unofficial start to the Northwest winery outdoor concert season will begin April 16 in Walla Walla, when members of The Gipsy Kings family perform at Waterbrook Winery as the Gypsy Allstars. 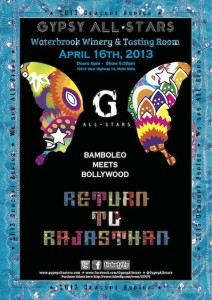 “I grew up in Montpellier with the gipsies and had the privilege of performing with the Gipsy Kings as their drummer,” Leonardi told Great Northwest Wine via email. “When I moved to Los Angeles I wanted to stay close to my roots and so I brought a piece of the Camargue with me. The project has met with such a wonderful response and we are moving the Gipsy rumba  in a new direction with the addition of northern Indian instruments and voice.”

The two-hour show is scheduled to start at 6 p.m. Tickets cost $25 each. As of Thursday afternoon, they are available via ticketfly.com or by phoning concert promoter Alisa Gilbert at 509-520-6451. Remaining tickets will be sold at the door Tuesday prior to the show start. Tapas and wine will be sold separately, and the event is restricted to adults ages 21 and up.

Leonardi described The Gypsy Allstars as a combination of the gipsy rumba with the sound of Rajasthan, India, in preparation for returning the gypsies to Rajasthan in October this year.
“All gypsy culture originates in Northern India, and this Indo-Gypsy fusion has really given us an opportunity to show the links  between the cultures,” he said. “The similarities are extraordinary.”

Gilbert said the Gypsy Allstars show is the first of perhaps as many as eight concerts she hopes to book for Waterbrook in 2013.

“We’ve done a few shows out at Waterbrook before, and this one is pretty progressive,” she said. “We’ve accommodated up to 700 people, and we’re praying for good weather, but the show will go on whether it’s moved inside or stays outside. We’re hoping for about 500 for this event.”

The expected configuration for this show will have the Gypsy Allstars performing toward the tasting room from the grassy area near the bocce court, with the lake and production facility serving as a backdrop. Spectators will be along the patio and the doors to the tasting room. There is backup plan in case of inclement weather, Gilbert said.

“It will be rain or shine, and it will go off without a hitch,” Gilbert said.

Gilbert, an Alaskan transplant, has been working with wineries, the Powerhouse Theater, Whitman College and other venues in the Walla Walla Valley for two years, she said. Recent bookings under her PREX production company included Peter Frampton, as well as bringing Ziggy Marley to the Walla Walla Fairgrounds.

Gilbert said the Gypsy Allstars will be donating a portion of the proceeds from their tour to a nonprofit.

“While they are coming back through the Northwest later this year, it will not be as personal as this performance,” Gilbert said. “There will be a meet-and-greet afterwards, so it will be a fun, fun event,” Gilbert said.