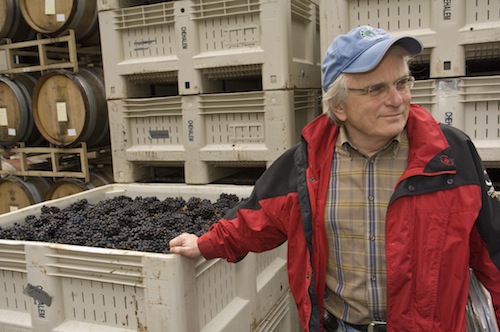 Harry Peterson-Nedry, who founded Chehalem Wines near Newberg, Ore., in 1980, is hopeful this spring that Oregon lawmakers will be able to streamline land-use regulations for the state’s wineries. (Photo courtesy @ Chehalem)

NEWBERG, Ore. — Chehalem Wines owner Harry Peterson-Nedry referred to his most recent visit to the Oregon state Capitol as “half satisfying and half ‘Let’s start it over again.’ ”

He found satisfaction Thursday in Salem when Gov. John Kitzhaber signed the growler bill into law, which allows grocers, restaurants and wine shops to fill consumer-supplied bottles with wine from kegs supplied by wineries.

Peterson-Nedry, 65, one of Oregon’s most innovative and accomplished vintners since his entrance into the industry as a grower in 1980, has been offering refillable bottles to customers at his Newberg winery for several years, just as a brewery or brewpub sends growlers out the door.

“The growler bill expands it into the retail market place,” he said. “New Seasons, Whole Foods, Zupan’s — those sort of retailers — now have the ability for the customer to grab an empty bottle off the shelf, have it filled by the retailer from a keg, then take the wine home, along with their baguette and salami, and go have a picnic.”

Oregon winemakers view House Bill 2443 as additional way to make wine more approachable, ensure freshness and also keep glass bottles out of landfills. The law limits the vessel size no larger than two gallons. Chehalem is among the industry leaders when it comes to providing kegs of wine to restaurants for use in glass pours, and Irving Street Kitchen in Portland offers about a dozen Northwest wines on tap via its “Barrel to Bar” program.

“We’re definitely trending up,” he said. “It’s a fairly small percentage compared to our bottle sales, but it’s a growth and niche market. We like to give our customers several ways to enjoy our wines, whether it be by bottle, keg or growlers.”

This week, there’s more legislative work ahead for Peterson-Nedry and others in the Oregon wine industry as they build support for Senate Bill 841, which would allow wineries to be sited on land zoned for mixed farm and forest use. It was introduced April 4 and referred to the committee on Rural Communities and Economic Development. A public hearing was held April 11, and a work session is scheduled for Tuesday.

“Historically, we didn’t even have the specifically noted ability to have tasting rooms,” said Peterson-Nedry, who served two terms on governor-appointed Oregon Wine Board. “It was an assumption, but it was not a state law, so we’re catching up on things assumed but no permitted  and also to define what is authorized.”

“The big thing to underline is that this a consensus bill and a lot of hard work has gone into it as an industry,” Peterson-Nedry said. “We are looking for a perfect balance, and we don’t want people screwing up that balance. We are looking for a legal framework and a framework that’s not going to change and give you whiplash every year or so.”

Special events at wineries would be limited

The process will create a limit of 18 special events — referred to as “agri-tourism” in the bill — in most parts of the state, and it creates a five-year permit for them. In the Willamette Valley, the events go through a county process for the first six events.

Within SB 841, agri-tourism or other commercial events are defined as “outdoor concerts for which admission is charged, educational, cultural, health or lifestyle events, facility rentals, celebratory gatherings and other events at which the promotion of wine produced in conjunction with the winery is a secondary purpose of the event.”

Peterson-Nedry said Senate Bill 841 is not a followup of the grandfather law extended to large-scale, on-premise restaurants such as King Estate.

“I think for large wineries that was taken care of two years ago, and that’s complete,” Peterson-Nedry said. “One of the things this does address is the commercial-type kitchens and authorizes the use of food as a foil to complement the wine.”

Bill would allow wineries to go beyond wrapped sandwiches

Legally, many wineries are limited to offering items such as wrapped sandwiches, cheese and fruit plates.

“Wineries have not been authorized to serve hot foods, and the food can’t be ordered,” Peterson-Nedry said. “It had to be prepared, so as you can see, without getting into a lot of details, what (SB 841) is, to a large extent, is a catch-up on the niggling details.”

“The pushback will be from people who have a specific interest to their situation, but we’ve tried to build that in,” he said. “This is very much a consensus bill, and the governor’s office basically coordinated a work group on this for several months. This is good.

“There’s a little pinch for everybody, but it satisfies the needs of anybody. If people think this changes anything radically, that will be a mistake,” he added. “We don’t want to hurt our economy and give away what has proven to be so valuable to our industry.”