DUNDEE, Ore. – Two generations of the Fries family mapped out some quality time with each other to celebrate two decades of working side-by-side on Duck Pond Cellars and making some of the Northwest’s top value wines.

“What it looks like now is definitely not what was drawn up 20 years ago,” Greg Fries, Duck Pond Cellars’ president and longtime winemaker, said with a chuckle.

Some things haven’t changed, though.

“When we first started, we wanted to get our foot in the door and make ourselves known as a value wine company, and we’re still doing that,” he said. “Competing with them in quality and beating them in price, that’s been our goal – and then grow our production from there.”

“We all work together,” Greg said. “But we’re all traveling between Washington and Oregon, the Willamette Valley and Southern Oregon, so it’s not too often I get to be with my folks and my sister and her husband and my wife and all get together, take a breath, relax, drink some wine and enjoy what the past 20 years has produced.”

In 1993, his parents began Duck Pond Cellars with 1,000 cases from a winery named for their home on Duck Pond Lane in Sunriver, Ore. Their joint efforts have created one of the Northwest’s largest winery and vineyard operations, which includes Duck Pond (46,000 cases) and Desert Wind (12,000 cases), bulk wine sold (62,000 cases) and 1,235 tons of grapes sold on contract.

“I think the story of Duck Pond has been the story of seizing opportunity,” Greg said. “We started off small, and the goal was just to make enough wine to sell ourselves out of the tasting room at retail and support ourselves. Since then, we’ve latched on an opportunity in Eastern Washington to grow some different varieties of grapes, and we’re doing a similar thing in Southern Oregon, where can grow more Pinot Noir and harvest it under a different timeframe.”

His folks have been farming for 50 years, starting in California. They moved to Oregon before buying land along the Willamette River near Dundee and planting 500 acres of hazelnut trees and a small vineyard in 1984. At one point, the family operated the largest hazelnut orchard in the country, Jo Ann said.

“My dad has been the visionary of the winery,” Greg said. “He’s been the farmer his whole life. He’s the one who got us going in this business. It started with planting 13 acres of vines here in Dundee. He was always able to see the next challenge on the horizon and let us help tackle that. His real passion is the vineyards.”

While Doug seems most comfortable on a tractor or flying a plane, every member of the family performs a well-defined role at Duck Pond Cellars.

“My mom has been his partner in farming for close to 50 years, and she does our office management,” Greg said. “My sister Lisa (Jenkins) who started out in 1993, has been managing the tasting rooms and personnel. She’s the typical small-business owner in that she does a lot of different stuff, and that’s how we all are.”

His sister-in-law, Erin, does the purchasing for the Duck Pond Cellars and Desert Wind tasting rooms. Lisa’s husband, Scott, handles the sales, extending the Duck Pond brand to 44 states and 20 countries. Greg’s wife, Amber, is the company’s director of communications. She grew up in Chelan, Wash., graduated from Linfield College in McMinnville, Ore., and met her future husband while working in the Duck Pond tasting room.

“That allowed me to really do more as far as vineyard development and overall management of the wineries,” Greg said. “So now I’m the director of winemaking, director of viticulture and more recently have started to help develop the Washington and Oregon wines in the marketplace.” 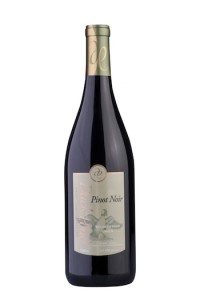 An important step in the family’s history will take place later this year when it begins to re-brand the Duck Pond Cellars label. There may also be another marketing tool to help better showcase the higher-tier wines that Chargin is crafting for Duck Pond. The business model that’s worked so well for this farming family won’t be changing too much, Greg said.

“What I thought about today was that you have to love it in order to grow a business over 20 years,” Greg said. “I think all of our family thinks the same way.”

The Fries’ day of celebration began by renting a touring bus and inviting media come along for a tour of two of their Willamette Valley vineyards. A delectable lunch of wood-fired pizza, catered by Red Hills Market, was served in a greenhouse. It was capped by an evening at The Allison Inn – Oregon’s luxury wine country destination.

Tuesday morning, the business partners were headed in different directions, including Chargin, who was bound for the Yakima Valley.

“When my folks floated this business idea to my sister and I, they said, ‘If you are not interested in it, you go do what it is you want to do – as long as you do something,’ ” Greg laughed. “It will be the same for my kids and my sisters’ kids. We’re looking forward to showing them what hard work is all about. If they want to do that in the wine business, that’s great. If they want to do that in something else, that’s great, too.”