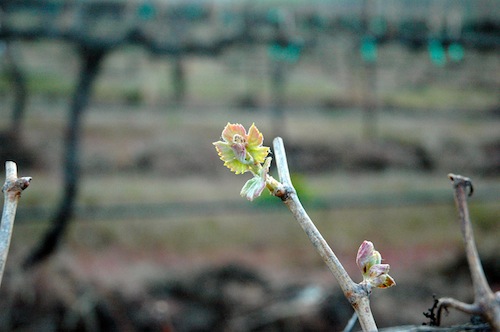 “It was a little scary,” said Kent Waliser, who manages Sagemoor Vineyards north of Pasco. “It was cold enough to cause significant damage. Without frost protection systems, we would have had problems.”

Grapevines are vulnerable to frost this time of year because tiny, tender leaves are just beginning to emerge from buds. This year, warm spring weather has pushed the vines out earlier than normal. Such varieties as Chardonnay and Cabernet Franc are the earliest and, thus, the most susceptible to cold temperatures.

Waliser, who also serves as chairman of the Washington State Wine Commission, said he had all the sprinklers at Sagemoor going – something that hasn’t occurred since he took over the operation in 2002. Sprinklers are used to warm the air around plants and to cover them with a protective shield of ice.

“We battled it with everything we had,” he said, including wind machines and smudge pots.

Champoux said his crew even built bonfires using vines that were pulled out after being damaged by a winter freeze in 2010.

“Those vines helped me out again,” he said with a chuckle.

He said he has seen a little damage, primarily in Cabernet Franc.

Not far away from Champoux, Jarrod Boyle of Destiny Ridge Vineyard was concerned about a young planting of Chardonnay block that is in full bud break. That site dropped to 28 degrees Tuesday. However, he saw little damage Wednesday afternoon and Thursday.

“We seem to be all right,” he said. “We definitely had a scare. That makes it hard to sleep at night.”

In the Walla Walla Valley, Norm McKibben of Pepper Bridge and Seven Hills vineyards has slept little in two days. On Monday and Tuesday nights, he saw temperatures of 29 degrees. Fortunately, the cooler Walla Walla Valley has seen little bud break so far this year, and that appears to have helped.

“If we had leaves out, they would have been burned,” McKibben told Great Northwest Wine. “The vineyards I looked at were in good shape.”

Co Dinn, director of winemaking for Hogue Cellars in Prosser, said the winery’s viticulture team has been scouting vineyards throughout the Columbia Valley and has found a little damage. He noted that the Chardonnay block at the winery got a little frosted but added it is in a low-lying location.

“We’re going to see a little effect, but it doesn’t appear to be severe at this point,” he said.

Dick Boushey, who owns a vineyard north of Grandview and manages vineyards on Red Mountain, hasn’t seen a lot of damage.

“It was threatening, no doubt,” he said.

Boushey heard wind machines go on as he was going to bed Tuesday night, and he didn’t sleep much.

“Wind machines were going on early throughout the Yakima Valley,” he said, noting that smudge pots and wind machines are expensive to run. “The biggest damage was to growers’ wallets.”

Boushey didn’t turn on his wind machines, “but it was right there.”

He said wine grapevines still are ahead of average and well ahead of the past few years. Warm temperatures will continue to push the leaves out on all varieties, and that concerns him a bit.

“If these temperatures come again in another week, it’s a whole different story,” he said.

“We re on call until Mothers Day.”