DUNDEE, Ore. – Amid Oregon winemakers, some families are royalty.

Lett, Adelsheim, Ponzi, Erath, Sokol Blosser, Redford and Campbell are among those held in high esteem. They came in the 1960s and 1970s, when entrepreneurs broke ground in the northern Willamette Valley, put Pinot Noir in the ground with little thought to where it could lead. They created a lifestyle – and an industry.

One of those courageous and rugged early explorers was Cal Knudsen, a man who came from Seattle in 1971 and planted a vineyard a year later. Knudsen was big in forestry and was a man of means and direction – something the early Pinot pioneers needed.

Four years ago – after a lengthy and fulfilling career as a key player in shaping the Oregon wine industry – Knudsen passed away. He not only planted one of the largest early vineyards but also helped to establish two of the state’s most important wineries.

Now his children, who are grown up and scattered across the continent, are returning to Oregon. The siren call of Pinot Noir combined with an innate purpose to honor their father are leading them to the red hills of Dundee to create a winery that pays homage to Cal Knudsen. 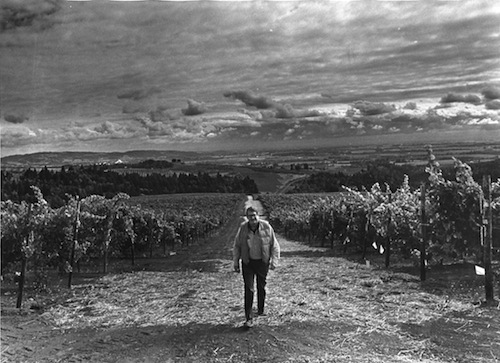 Cal Knudsen walks through his vineyard, circa 1983. (Courtesy of Knudsen Vineyards)

“I think he’d love this,” said Page Knudsen Cowles, Knudsen’s daughter, who lives in Minnesota. She and two of her three brothers are going to create Knudsen Vineyards, a small winery that will focus on Pinot Noir from grapes their father planted.

Knudsen fell in love with wine when he spent time in Burgundy. Upon his return, he planted the first large-scale vineyard in the Willamette Valley. It spanned 125 acres at a time when most other sites were not more than trials at 2-3 acres.

“Our father was in a position because of his career in the forest industry to invest a bit more heavily,” Cowles said.

He quickly got together with Dick Erath, who had come to Yamhill County a few years early and produced the first wine in the Dundee Hills in 1972. Together, the launched Knudsen-Erath winery. Knudsen grew the grapes, and Erath made the wine. The partnership lasted until 1987, at which time they parted amicably and remained lifelong friends.

About the same time, Argyle Winery down on Highway 99W was starting up, and Knudsen provided the grapes for the new producer. In 1990, he sold his part in Erath and reinvested it into Argyle. He became the company’s chairman, a position he held until he retired in 2007.

“He was a great inspiration to me,” said Rollin Soles, Argyle’s founding winemaker who earlier this year moved into a consulting role at Argyle. “He was the foundation for starting Argyle. I worked with Cal for a long time. He was a great mentor to me.”

It didn’t hurt that one of Argyle’s specialties was sparkling wine. Cowles said her dad was smitten with bubbly, and that made the opportunity to work with Argyle even more enjoyable.

In 2006, Erath sold his namesake winery to Ste. Michelle Wine Estates. The land upon which the winery sits is still owned by the Knudsen family, as are the surrounding vineyards. The children now are paying homage to their pioneering father by creating a winery that bears his name.

“I think he’d think this was pretty cool,” Cowles said. 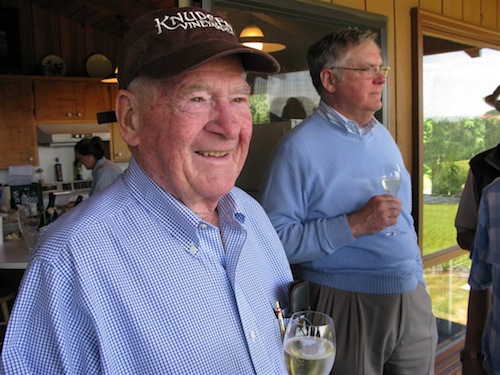 Cal Knudsen came to Oregon in the early 1970s to plant Pinot Noir and was an important part of two wineries. (Courtesy of Knudsen Vineyards)

None of the four Cowles children sought careers in the wine industry, though their father’s place in the Willamette Valley remain a shared experience.

“We felt a lot of freedom to choose for ourselves,” she said. “This land is a real constant in our lives. We’re very proud of it. We love this land, and we’re excited about doing more with it.”

Cowles, a Seattle native who moved to Portland during kindergarten, has lived in Minnesota since 1990, where she is a high-level volunteer for the Trust for Public Land, a nonprofit. Colin Knudsen is an investment banker in New York City, and David Knudsen lives in Texas and is president and CEO of Ostrom’s Mushroom Farm in Olympia, Wash. Cal Knudsen Jr. lives in Woodinville, Wash., and is the only one of the siblings who does not plan to be actively involved in the wine venture.

Their first wine will be a 2012 Pinot Noir from grapes their father planted. It is being made by Argyle winemaker Nate Klostermann and Soles and will be released next year. Just four barrels – 100 cases – are being made. That’s enough for the siblings to get a feel for the wine industry and decide how they want to proceed from there. It will be sold through a mailing list and at retailers and restaurants in western Oregon.

Additionally, Knudsen’s children are continuing a project their father began by slowly replanting the vineyard, staying one step ahead of phylloxera.

“It’s something Cal set in motion years ago,” Soles said. “We’ve been tearing out perfectly good old vines and replanting them.”