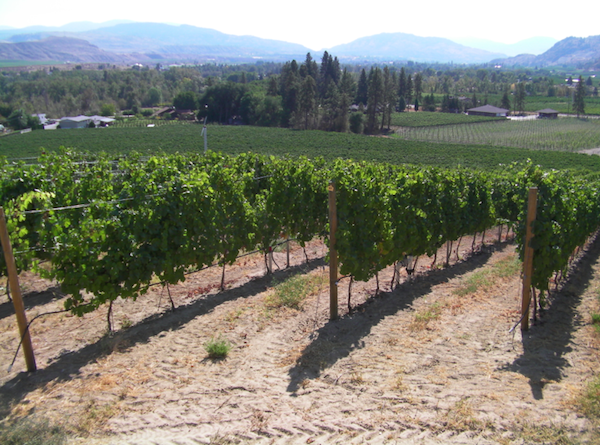 That 10-acre Stoney Slope Vineyard serves as the backdrop to the new and modern tasting room that sits atop the winery that founding winemaker Adolf Kruger built adjacent to the family home. It’s also the backbone for some of North America’s top Riesling, Gewürztraminer and Pinot Gris.

However, he and sons Hagen and Roland have come to rely on their youngest planting for some of their highest-production wines, particularly their popular Autumn Gold white blend. It’s an 11-acre block they refer to as the Secrest Vineyard.

“That’s not the official name, but we’re still looking for a name if anyone comes up with anything,” Hagen, the winemaker, said with a chuckle. “It’s very different from our other sites, but a very prime site, as far as we’re concerned.” 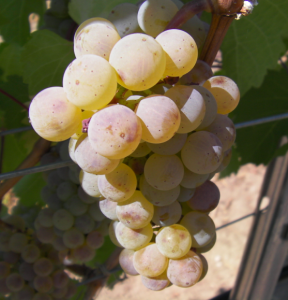 Secrest, planted in 2006, is the largest of the family’s three vineyards and near the base of the road to the landmark McIntyre Bluff. And it’s a striking contrast to Stoney Slope and the 5-acre Mystic River Vineyard, which is along the South Okanagan River. It’s within eyesight of Secrest, across Highway 97 and about a mile to the south.

“This site would be very conducive to some Bordeaux reds, and it would be perfect for them, but with our Germanic backgrounds we went with our traditional Riesling and Gewürztraminer plantings,” Hagen added with a smirk. “But we did plant a couple of acres of Merlot. We had to put some reds in here because it was such a great site for that. There’s a little bit of Petit Verdot.”

The wind-protected parcel is 13 acres, but only about 9 acres of it are planted.

“It has a beautiful, full-south exposure, and the soil is a sandy loam, a ratnip-type soil,” Hagen said. “You can actually stick a shovel in and farm it, so it’s very nice in that perspective.

“Everybody likes to work at the Secrest Vineyard,” he added with a chuckle.

At this point, the Krugers are pleased to slowly grow their production but are not looking to add another vineyard-designate wine, so there are no plans to produce a Secrest Vineyard bottling.

“Riesling still needs to have a very good site, and with that south-facing slope, it’s very conducive,” Hagen said. “We hope to see some exciting things from this vineyard as far as that is concerned. We have the Gewürztraminer on our lower section, which is cooler. It really complements some of our Gewürztraminer wines.”

Their Germanic whites traditionally score well in Canada and beyond. In 2012, Wild Goose received the award for Small Winery of the Year at the Riverside (Calif.) International Competition, where it won the crown for Best White Wine for its 2011 Dry Gewürztraminer and earned silver medals for its 2009 Cabernet Sauvignon and 2009 Pinot Noir.

Hagen capped the year with Platinum awards for his 2011 Mystic River Vineyard Gewürztraminer and 2011 Mystic River Vineyard Pinot Gris at Wine Press Northwest’s year-end competition of gold-medal wines. That Gewürz was the top white wine of the competition and 12th career Platinum Award for Wild Goose, which was named the publication’s Pacific Northwest Winery of the Year in 2009.

The growing fan base of Wild Goose Vineyard will be pleased to hear that the Krugers are in the midst of bottling 12,500 cases from the 2012 vintage, the largest in the 23 years of wine production.

“We’ve increased production about 2,000, which is a nice increase,” Roland, the winery’s general manager, said Tuesday during a busy week of bottling. “We had planned to process that many cases from 2010. Some vineyards got caught with huge crops, but we kept an eye on our crop levels and adjusted appropriately.”

If all the paperwork goes through, the Krugers will be opening the lounge portion of their tasting room later this spring. That will allow them to serve small plates to visitors as well as play host to dinners.

That likely will be the finishing touch of the new tasting room, and the second-generation winemaker seems content with the immediate future for Wild Goose Vineyard, even with a son working in the winery.

“This point we’re just going to grow what we have a produce what we have,” Hagen said. “For the next few years, we just want to work with what we have and not get too crazy.”