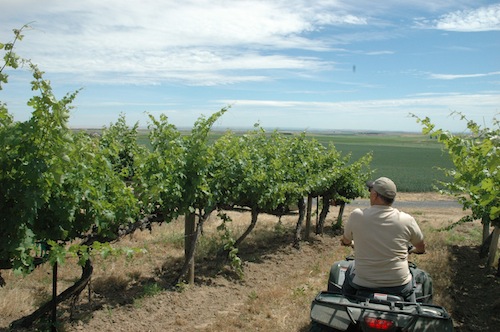 Paul Champoux checks his Block 1 Cabernet Sauvignon, planted in 1972, in July 2011. This week has been a battle at Champoux, as sub-freezing temperatures have threatened this year’s crop. (Photo by Andy Perdue/Great Northwest Wine)

Washington wine grape growers dodged more freezing temperatures this week across the Columbia Valley, especially in the Horse Heaven Hills, where the mercury dropped as low as 23 degrees.

“We put up a good battle, and I think we won,” said Paul Champoux, owner of famed Champoux Vineyards in the Horse Heaven Hills.

Early Tuesday morning, Champoux saw temperatures drop to 23 in the coldest spot on his property, a canyon where vines are not planted. In his vineyard, he said the lows reached 29 degrees.

Vineyards are particularly vulnerable right now because tiny leaves are just emerging from their protective buds. One frosty morning can bring the entire vintage to a halt if the damage is widespread.

Fortunately for grape growers, the damage appeared to be minimal. Champoux said he had wind machines running, sprinklers going, heaters fired up and even bonfires lit.

“We were prepared for the freeze,” he said. “We won this battle.”

He said he saw minimal damage – perhaps one frosted bud for every 10 vines – in Chardonnay and Muscat, which are two varieties that emerge from winter slumber earliest.

His Cabernet Sauvignon still is in the early stages of bud break, so it is pretty well protected from damage, he said.

Not far away, Mike Andrews at Coyote Canyon Vineyard tracked temperatures Tuesday morning to about 29 degrees for less than two hours. His vineyard location tends to be warmer than Champoux, he said. However, he has about 4 inches of growth on his Chardonnay, and he did see a bit of damage in one block of Chardonnay and Nebbiolo.

“It was a scary experience,” he said. “I’ve never gotten damage before by spring frost.”

On Red Mountain, Damon LaLonde of Vinagium said temperatures got low enough to turn on the wind machines, but they never quite dropped below freezing. Vinagium has two vineyards on Red Mountain: Red Heaven at 750-930 feet elevation and Scootney Flats at 685 feet.

In Walla Walla, vineyards also seemed to escape the worst. Dave Hansen, co-owner and viticulturist at Cougar Crest, said temperatures dropped to 32 and wind machines kicked on automatically. But he said it was much worse during a cold snap two weeks ago.

And in the Columbia Basin, there appeared to be no issues, said Roger Gamache, owner of Gamache Vineyards near Basin City. He said his best frost indicators are his peach and nectarine orchards, and he still has a full crop on them.

He saw temperatures drop to 29 a couple of weeks ago, but he saw nothing below freezing this week.

“That was a wild ride, though,” he said. “Maybe now we can get some sleep.”