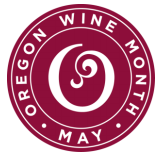 Wine promotions, tastings and other activities are scheduled for wineries and wine retailers around the Beaver State. The celebration concludes with the annual Memorial Day Weekend Open House, which is when most of the state’s wineries are open for public tastings.

Oregon wine will be made more prominent at most of the state’s leading food and beverage retailers, who have created special promotions and pricing during the month.

One of the highlights during May will be a five-part series on Northwest Vine Time devoted exclusively to Oregon wine. Brian Bushlach will interview a number of industry members for programs airing throughout the month. In addition to the flagship station, KXL FM 101 in Portland, the broadcasts also will air on KIRO in Seattle, KPNW in Eugene, KFLS in Klamath Falls, KTIL in Tillamook, KWRO in Coos Bay, KLOO in Corvallis, KCMX in Medford and KACI in The Dalles. They began airing Sunday.
Oregon restaurants participating in the Superior Cellars Awards program will be featuring Oregon wine during the month of May with some offering special promotions. The Superior Cellar Awards is a joint effort between the Oregon Wine Press and the Oregon Wine Board (OWB). Superior Cellars provides consumer guidance on restaurants that feature diverse and broad selections of Oregon wines on their wine lists.

Some wineries will be participating in an OWB promotional program with giveaways of backpacks filled with gifts such as T-shirts, wine growlers, gift certificates and wine glasses among other prizes.

Wineries will also be on the lookout for Oregon Wine Country license plates. The specialty plates will celebrate their first year anniversary in May. More than 5,000 license plates have been sold so far, according to the Oregon Department of Motor Vehicles. May is chock full of events and activities highlighting Oregon wine.

Among the activities are:

The Oregon Wine Board is a semi-independent state agency managing marketing, research and education initiatives that support and advance the Oregon wine and wine grape industry.