NEWBERG, Ore. — Lifelong luxury hotelier Pierre Zreik has spent much of his career in the Willamette Valley, and it seems as if the acclaimed Allison Inn & Spa in Newberg will keep him in Oregon wine country well beyond the resort’s fourth anniversary in September.

“We are surrounded by close to 200 wineries,” said Zreik, the resort’s managing director. “Oregon has over 530 wineries. I recall when I came here in 1994, there were only 72 wineries. I remember that vividly, and we enjoy every minute of working with all the wineries.”

Much of the Oregon wine industry simply refers to it as “The Allison,” and the 85-room property immediately earned its ranking alongside other Northwest luxury properties such as Willows Lodge in Woodinville, Wash., and Salish Lodge & Spa in Snoqualmie, Wash.

In a sense, it’s a gift from Joan Austin to Willamette Valley winemakers. She and her husband, Ken, built Newberg-based A-dec into the world’s largest producer of dental chairs. They spent a reported $45 million on The Allison, which is part of her community development called Springbrook.

“A lot of local wineries, friends, and local businesses came to her saying, ‘We need something in the region,’ ” Zreik said. “Since we opened, people are coming from Portland and spending two days. We’re seeing more wine groups coming from everywhere. Last year, we had groups from Texas, from Florida from Carolina. They are spending more time here, more time in the wineries — and buying more wines.”

Zreik’s résumé in luxury lodging includes managing properties for Four Seasons and Rosewood as well as the Avalon and the Heathman in Portland.

“I was born and raised in Lebanon, in the Middle East, and I’ve been in the hotel business since I was a little kid, basically,” he said with a chuckle. “Somehow, I’ve been blessed to be connected to this project. I was literally the first employee and translating the owner’s vision. She wanted a very luxury upscale hotel.”

Allison Inn owner has history of giving to Oregon schools 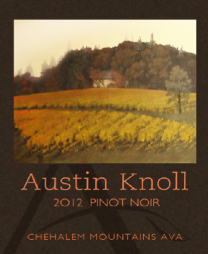 Her family’s philanthropy at Oregon State University and to her adopted hometown is well-documented, including donating land for what would become Joan Austin Elementary School. The Allison is less than five minutes north of bustling Highway 99, and the road winds through the Springbrook community and green fields.

“We are within the city limits,” Zreik said. “That was very important to the local farmers and wineries that we are not encroaching on their land.”

The property sits on a 35-acre footprint that includes vegetable gardens for the on-premise Jory Restaurant and grape vines planted on a gentle slope north of the resort. 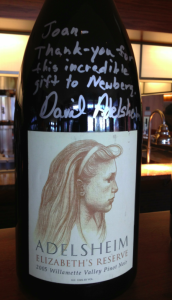 This fall, The Allison will begin offering wines from those estate vines under their Austin Knoll label. Production of 2012 Pinot Noir was limited to 92 cases and those wines will be sold only at the resort. David Adelsheim and his team manages the vineyard and makes the wines.

“It’s another great story we’re proud of,” Zreik said. “David’s a great friend and a great supporter — like every other winemaker in this region.”

“We have half an acre for growing our own produce,” Zreik said. “Nine months ago, my owner gave me another acre. And we just finished building a greenhouse. We are growing everything thing right here — from potatoes to carrots to cucumber to parsley to cilantro. That’s our impact. It’s an amazing, amazing story.”

Jory’s wine list also reflects the Willamette Valley and many of its top producers.

“That’s our commitment to the region,” Zreik said. “If you look at our list, 65 percent of our wines are local — local meaning Washington and Oregon.”

Guests of the resort, which constructed under Leadership in Energy and Environmental Design (LEED) guidelines, will notice a strong sense of environmental stewardship within the suites.

“That was another dream of Joan’s from the beginning,” Zreik said. “She truly wanted The Allison to be LEED-certified and wound up getting LEED Gold. When we opened three years ago, we were one of only 25 hotels throughout the world, and that number is growing.

“She knew that was going to cost us more money to build it that way, and we have continued that approach throughout the property,” he continued. “When you go to your room, you don’t see shampoo bottles. You don’t see bottled water. We use glass, glass, glass. These days, some companies who will not use your facility or stay with you unless you are green.”

Most of those attracted to The Allison come to be closer to the wineries of the north Willamette Valley.

“Local people who went to the beach on the weekend now are coming to spend the weekend with us and visiting wineries,” Zreik said. “I know a couple who have been here with us seven times in the last two years, and every time he and his wife come and visit the boutique wineries. And they are both born and raised in Oregon.”

And Zreik continues to greet his guests with a winning combination of elegance and disarming charm. On this day, he chatted with a young family in the lobby and — despite wearing an well-tailored pinstripe suit — thought nothing of picking up a toddler for a mid-morning greeting.

“I’ve been with Four Seasons. I know the Rosewood, and I understand luxury,” Zreik said. “The best part of this is I get to work with an independent owner — a small owner who is trustworthy and lets me run the hotel. We’re getting all these amazing awards because of the trust she has in me and lets me do what I know best.”