The American Viticultural Area system was just arriving in the Pacific Northwest – with the Yakima Valley being the first in our corner of the continent. Wineries such as Hogue Cellars and Columbia Crest were just starting, and the Washington State Wine Commission was still four years away from being formed by the state Legislature.

Since those heady days when the young couple made a few hundred cases of wine to launch Barnard Griffin in a ramshackle vineyard shed at Caroway Vineyard, more than 700 new wineries have launched, turning Washington into a small yet important force in the American wine industry.

“Nobody would recognize the industry today,” Griffin said. 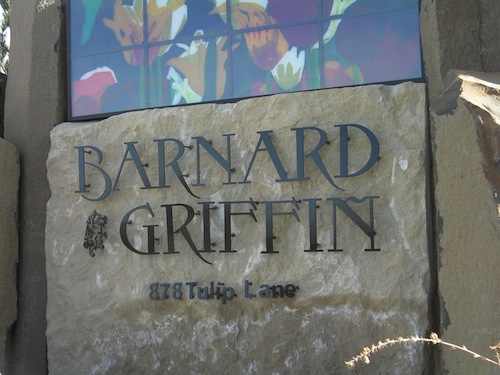 His decision to come north from his native Northern California in the mid-1970s was seen by many as a quixotic quest. But Griffin – one of the smartest people in this industry – knew exactly what he was doing.

Griffin grew up a ZIP code away from Napa Valley, where his uncle purchased a prune orchard on the Oakville Cross Road and turned it into a vineyard. The young Griffin was entranced by the art and science that went into grape growing and winemaking, so he decided to make it his profession.

After graduating from the University of California-Davis in 1975 with a degree in fermentation science, he went to work at Buena Vista in Sonoma County, one of California’s oldest and most storied wineries. At the time, legendary Napa Valley winemaker André Tchelistcheff was consulting for Buena Vista and, as fortune would have it, Ste. Michelle Vineyards in Seattle.

Griffin got to work side by side with the master, and Tchelistcheff’s interest in Washington wine – fueled by the fact that Washington was on the way to Canada, where he liked to go fishing – gave Griffin a reason to gaze north. Legend has it that when Tchelistcheff was asked where the greatest wine in the United States is made, he answered, “It hasn’t been made yet, but when it is, it will be made in the Pacific Northwest.”

So when Bill Preston, a tractor salesman turned grape grower, came to California in 1977 looking for a winemaker to run his new operation north of Pasco, Griffin didn’t hesitate.

Griffin’s wines were instantly recognized for their superiority, and with the 1983 harvest, he and Barnard decided to start their own small label. Griffin left Preston soon after, taking the job of head winemaker at the new Hogue Cellars in Prosser.

“They were more receptive to me pursuing my own thing,” he said.

Griffin stayed there until 1991, when it was time for him to focus all of his efforts on Barnard Griffin and its success. But the winery still didn’t have a home, and Griffin moved much of his operation to Badger Mountain Vineyard in Kennewick, which was kind enough to make room for him.

In 1997, the winery’s present home was built in south Richland. The location was not a difficult choice for the couple. Bookwalter Winery already had established itself there, and the winery overlooks Interstate 182 – where nearly every wine lover traveling to Walla Walla drives past.

Last year, Barnard Griffin went through a complete remodel, changing its quaint tasting room into a much larger space, adding a bistro, a glass art studio and conference space.

Through the years, a lot has changed in the Washington wine industry, yet Griffin plugs along, making 70,000 cases of award-winning wines without jumping onto winemaking bandwagons.

“He’s just out there doing his own thing,” said Kent Waliser, general manager for Sagemoor Vineyards north of Pasco, one of Griffin’s favorite grape sources. “He’s in some ways eclectic. There are all these fads and nuances (in winemaking). He just stays steady to the trueness of the fruit. Fads come and go, but Rob’s wines are steadfast. They hold true to the variety.”

Though Griffin is not yet 60, he is looking to the next generation that will carry on his legacy. Fortunately, both of his daughters are coming up through the business and are making their mark at the family winery. Elise, 27, earned a business degree at Washington State University and oversees marketing and promotions at Barnard Griffin. Her sister, Megan, 24, studied winemaking at WSU and is an enologist and viticulturist working in the cellar and vineyards alongside her father.

Fortunately, the two get along famously and are intent on carry on their parents’ work.

“We had always encouraged them without demanding or even heavily suggesting,” Griffin said of his daughters. “It’s a rare opportunity to have a legacy business and be in on the ground floor of something that has financial security.”

Waliser already sees their effect on the winery.

“Rob is allowing his daughters to come on board and learn,” he said. “He’s mentoring without being critical. You feel this collaborative effort. They are free to express where they want to go, and you can see this in the winery. This is a tribute to Rob and Deb, and it’s fun to watch.”

Elise and Megan grew up around the winery, and they have fond memories that are affecting their decisions today.

“When I was little, I would watch my parents come home happy,” Megan said. “I just realized at an early age that being able to like what you do in your career is rare, and you should run with it.”

Elise recalls helping on the bottling line or stocking shelves on big event weekends, as well as being around to see her father’s work ethic.

“We would take dinner to Dad on late nights when he was bottling wine,” she said. “I always wanted to drive the forklift, but they wouldn’t let me.”

Today, it’s easy to see the daughters’ touches in the winery, a bit of whimsy that is more likely to attract new wine drinkers closer to their age. There is no doubt their parents see the same gleam in their children’s eyes that they had three decades ago when they decided to go out on their own.

And that bodes well for the next 30 years.