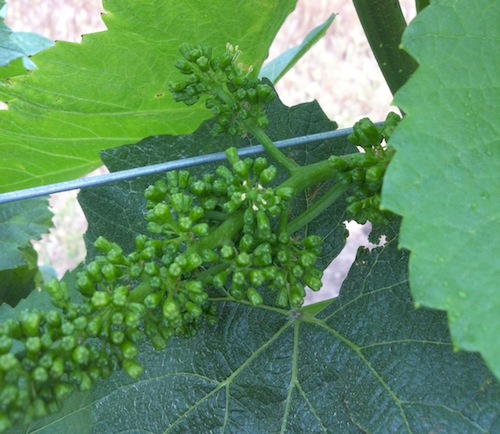 PASCO, Wash. — Washington state’s 2013 vintage is in the early stages, yet already it is giving the wine industry a wild ride.

In early April, grape growers across the Columbia Valley were reporting early bud break – when tiny leaves emerge from buds formed the prior year. Now, Great Northwest Wine has heard of at least one example of bloom taking place in Washington – a full two weeks earlier than normal.

Bloom is when flowers appear on tiny clusters. Wine grapes are self-pollinating, so this is when fruit can form and begin to grow.

“We’re running well above the normal line now,” said Kent Waliser, general manager of Sagemoor Vineyards north of Pasco overlooking the Columbia River. “This is as wild as 2010 and 2011 were not.”

In those two years, bud break and bloom were a full two weeks late and set the tone for a nerve-wracking vintage during which grape growers and winemakers never were quite sure if the fruit would ripen. 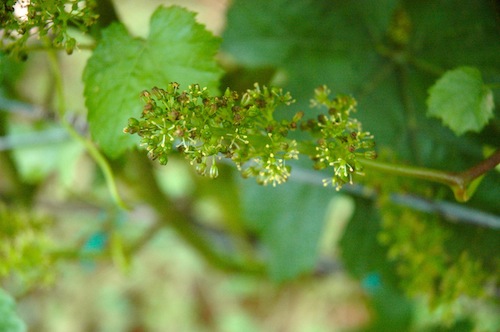 In Washington, bloom typically takes place in June. This is when self-pollinating wine grape vines form their fruit and begin to grow. (Photo by Andy Perdue/Great Northwest Wine)

“Everybody’s pretty happy,” said Kevin Corliss, vineyard operations director for Ste. Michelle Wine Estates, which uses roughly two-thirds of all the wine grapes grown in Washington. “I would so much rather be a little early than a little bit late.”

Waliser said the area of bloom at Sagemoor is in a Chardonnay block that was first to have bud break in early April. That, he said, puts Sagemoor a month ahead of the notoriously cool 2010 and 2011 vintages. He likened this spring to 2003, a historically hot year.

He said the past two weeks of warm temperatures in the 80s and 90s have pushed growth significantly, with 2-foot shoots at Sagemoor.

Jarrod Boyle, owner of Alexandria Nicole Cellars in Prosser and Destiny Ridge Vineyard in the southern Horse Heaven Hills, could not be happier, especially after battling frost for much of April.

“The vines look terrific,” he said. “They really jumped from 2-inch growth to 8-inch growth – and now it’s 12-inch growth. We beat the frost, and everything looks vibrant and healthy.”

Waliser, who also grows cherries, noticed a bit of color on that fruit already. He said that in 2003, he picked Chelan cherries on May 31 – much earlier than normal.

He noted that a warm year does not guarantee a great vintage, but it does offer growers and winemakers some advantages.

“It gives everyone more options going forward,” he said. “It’s kind of exciting when you’re a little ahead.”

Corliss agreed, adding that the only issue he sees is growers scrambling a bit to reschedule some of the work they didn’t expect to tackle for a few more weeks. When told there was bloom already, he was surprised.

“I was thinking we might see some in the last week of the month,” he said. “The first week of June is pretty normal for early varieties in warm spots.”

Corliss and Waliser both said Mother Nature is still in charge.

“We could cool off for two weeks and be back to normal,” Waliser said.

Added Corliss: “I have no fear of being early. In fact I like it. But it’s a long way from here to there.”