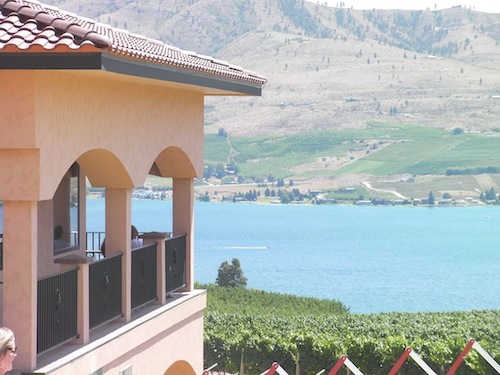 Benson Vineyards Estate Winery is on the north shore of Lake Chelan and is one of the most beautiful winery settings in Washington.

CHELAN, Wash. – As the Lake Chelan wine industry continues to grow, it is becoming a bigger economic driver for the region in North Central Washington.

This weekend, a few thousand wine lovers will descend on the shores of the third-deepest lake in North America for the annual Lake Chelan Spring Barrel Tasting Weekend.

“We’re becoming more and more known as a wine destination,” said Judy Phelps, co-owner and winemaker at Hard Row to Hoe Vineyards on the north shore of the lake near the town of Manson.

From Balsamroot to bordello 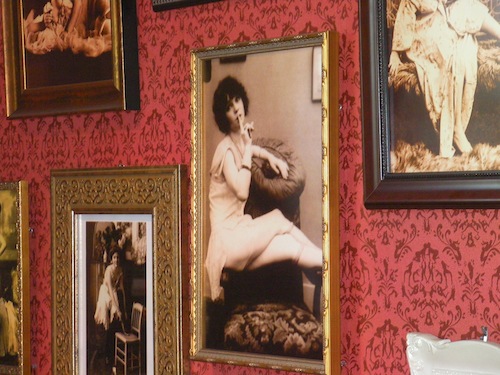 Hard Row to Hoe Vineyards on the north shore of Lake Chelan has a bordello theme, thanks to a local legend that dates to the 1930s.

Phelps started the winery with her husband, Don, in 2005. Originally, it was called Balsamroot Winery, which didn’t work out well.

“We quickly decided it was a lousy name,” Phelps said with a laugh. “People called it ‘Bitterroot,’ ‘Balsamic vinegar’ – anything except Balsamroot.”

In 2008, they renamed their winery Hard Row to Hoe after a historian found a story dating back to the late 1930s, when some “professional” ladies moved from the Grand Coulee Dam construction to set up shop in an area called Point Lovely. An enterprising man set up a rowboat taxi from a mining operation to bring workers across the lake – hence the double entendre Hard Row to Hoe.

Since the new name came into being, nobody has forgotten the winery’s name. Hard Row plays up the legend with wine names such as Shameless Hussy, Naughty Buoy and Good in Bed. The tasting room takes on a bordello theme, complete with a red light over the restroom when it’s occupied.

It’s all in fun and helps attract the customers.

“Their story is so cool,” she said. “They are a great draw.”

Thus, even though Hard Row is on the north shore of the lake and a bit farther drive from downtown Chelan, it will pull in several hundred wine lovers this weekend. 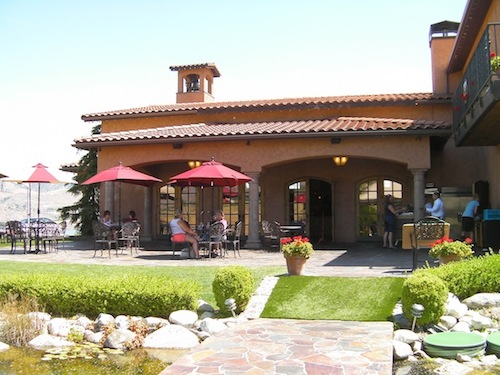 Tsillan Cellars on the south shore of Lake Chelan is one of the most spectacular wineries in the Pacific Northwest. The Tuscan-style winery also includes a restaurant and overlooks the lake.

The development of the Lake Chelan wine industry in the past 10 years has been nothing short of remarkable. For decades, the region has been the summer playground for residents of the greater Seattle area – some three hours’ drive away – and all the vacation activities in July and August have basically sustained the hospitality and tourism businesses for the rest of the year.

However, the wine industry is now extending Lake Chelan’s visitor season by several months. The Lake Chelan American Viticultural Area was approved by the federal government in 2009, just 11 years after the first wine grapes of the modern era were planted.

Today, there are more than 250 acres of wine grapes on both sides of the lake and 21 wineries in the area. All of them will take part in this weekend’s barrel tasting weekend.

Phelps said wine tourism starts in Chelan during the final two weekends in April, during an event called Chelan Nouveau.

She said the stream of visitors doesn’t slow down much until the second weekend of October, then it drops off steeply in November and December.

“I think Leavenworth gets all the Christmas traffic,” she said with a grin.

Thanks to the near-steady stream of out-of-town visitors, Phelps sells 90 percent of her 3,000-case production directly to consumers – an extremely high number compared with wineries in more traditional areas that rely more heavily on distribution through groceries and restaurants. This, she said, is a typical number among Lake Chelan wineries, all of whom are smaller producers.

And not all of her customers are coming from Seattle anymore, either.

“I just had a couple from California in the tasting room,” she said Wednesday afternoon. “They ordered a case of wine to be shipped home. We’ve noticed an uptick of more out-of-state people coming in.”