“I was a former Alaska fisherman, and I made it my business back then to know how to get the Copper River salmon to Seattle,” Rowley told Great Northwest Wine. 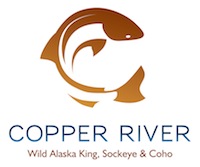 Almost immediately, his work benefited restaurants in the Puget Sound and the folks who plied the waters of this 300-mile river, the nation’s 10th-largest in terms of water discharge.

“We have been getting calls since the first of May wondering when the salmon will arrive,” said Lane Hoss, vice president of marketing for Anthony’s Restaurants. “Our executive chef, Pat Donahue, will be on the tarmac at the Seattle-Tacoma Airport (Friday) morning to greet the arrival of the first fish coming in on Alaska Airlines.”

It’s been a remarkable and satisfying ride for Rowley, whose primary work now is as liaison between the boats and the restaurants. At the beginning, though, he needed to train boat operators to properly prepare the salmon for overnight shipping. And in 1983, Rowley himself delivered the first 400 pounds to four Seattle restaurants.

This month, he’s been featured by The Food Network, the Los Angeles Times, KIRO Radio and the Cordova (Alaska) Times. However, Rowley credits the late Erling Nilson, whose family launched Port Chatham Packing in Portlock, Alaska, and later in the Seattle suburb of Ballard, for introducing him to Copper River king salmon.

“He had been in the fish business in different areas of Alaska and he knew that fish,” Rowley said. “He used it to make beautiful silky slabs of cold-smoked salmon, and Port Chatham was quite well-known for that product. No one else had anything like it. I did a few projects with Erling and learned where this fish was from. It was never advertised as Copper River, but rather as the Port Chatham brand. I got to know how good that fish was, and I started working with it.”

In 1983, Rowley told eager fishermen in Cordova to expect $3.50 per pound, an attractive haul in those days. In recent years, though, fresh Copper River king salmon has fetched as much as $50 per pound, making it difficult to fathom that most Copper River kings ended up smoked or canned before Rowley changed the landscape.

“I’m always the first in line to get a piece of the fish,” he said. “I’m happy to pay $50 a pound if that’s what I have to do. It’s well worth it to me. It’s one of the wonders of the world, especially when it’s paired with Oregon Pinot Noir. That’s something to celebrate and something to be excited about.”

Few in the Pacific Northwest know the layers of the fishing industry, seafood, wine and restaurants as well as Rowley. His work as an ambassador includes overseeing the Pacific Coast Oyster Wine Competition, which he created in 1994 for Taylor Shellfish Farms in Shelton, Wash.

The wines of choice during his oyster competition are much different than those Rowley and many others reach for when the Copper River kings are plated.

That explains why, in 1992, Rowley’s marketing efforts for salmon and wine extended beyond the Puget Sound.

“I had a contract with the Oregon Wine Advisory Board and worked with them to promote Pinot Noir with salmon,” he said. “We were going to hold dinners in New York and San Francisco for 10 to 12 A-list press people, and the idea was to serve five Oregon Pinot Noirs with each dinner, so the board sent a call to the wineries, told them what we were doing and asked if they wanted to participate. We had 67 different Oregon Pinot Noirs that we tasted with the salmon.”

Among the best, as Rowley recalls, were made by Bethel Heights, Henry Estate and Lynn Penner-Ash during her days at Rex Hill.

“But there were only three that weren’t wonderful,” he said. “Remember, this was back when drinking red wine with fish was seen as weird. Now, it’s kind of a classic. I don’t think there’s a better food-and-wine pairing than Pinot Noir with salmon.”

The next year, he staged a similar press dinner at The Sheraton in Seattle.

“It was called ‘The Tale of Two Pinots’ and included a seminar on Pinot Gris,” Rowley said.

Ray’s Boathouse and Anthony’s were two Seattle-area restaurants that didn’t need any lobbying. They jumped on board to catch that first delivery of Copper River kings back in 1983.

“We have been serving Copper River since Jon first promoted it and have a signature salmon recipe that was developed for the Copper River King Salmon,” Hoss said. “It is our Chargrilled Salmon Medallion with Sun-Dried Tomato Fresh Basil Butter. We love chargrilling the Copper River kings, and this recipe allows us to ensure that the salmon is cooked perfectly while enhancing its wonderful rich oil content.”

“Our favorite pairings for this recipe are Merlots,” she said. “Favorites over the years with this dish are Merlots from Chinook Wines, L’Ecole No. 41 and Woodward Canyon.”

The Copper River sockeyes, not as rich in oil content but 10 times more plentiful, are roasted on an alder plank and serve with a smoked sweet red pepper buerre blanc, Hoss said.

This morning, a few of the Copper River kings caught during Thursday’s 12-hour season opener won’t make it beyond the airport terminal. Rather, they will be prepared by several of the Seattle area’s top culinary talents in the Copper River Chef Cookoff.

“We are proud to have won the first three competitions and plan to continue our streak,” Hoss said. “We will be reporting on the event starting around 5 a.m. on Twitter (@AnthonysRestsNW).”

The event runs from 6 to 9 a.m., and one lucky Alaska Airlines frequent flier club member will receive a free trip to Cordova.

Hoss said the numbers of Copper River kings making it to Seattle this morning might be a bit off from previous years. Head seafood buyer Tim Ferleman received reports of foul weather with 40 mph wind and 15-foot seas.

“The first opening is always ‘iffy,’ so we keep our guests posted on our website with what we received, which restaurants have kings or sockeyes or the best – both,” Hoss said. “We also keep them posted on the upcoming openings.”

Other salmon runs can rival the quality of the Copper River kings, including the Yukon River kings, Rowley said.

“But now we can’t get the Yukon,” said Rowley, who grew up in Valdez and lived in Ketchikan. “There haven’t been any for about three years. There are not enough coming back (to open the fishery).”

This year, the Alaska Department of Fish and Game projects the Copper River king salmon run to be about 14,000 — about 2,000 more than last year. The season will be closed in about a month.

The Copper River sockeye salmon is estimated to be at 1.2 million, about the same as in 2012. That season runs through July.

On May 29, Rowley will serve as guest of honor for a special CopperRiver30 dinner at Seattle’s Blueacre Seafood, operated by his longtime friends chef Kevin Davis and GM/wine director Bruce Sturgeon. The meal, which features Northwest wines, costs $65. That includes the wine and free parking.

If he gets his wish, Rowley’s salmon will be “grilled and cooked slow,” he said. “I really don’t care for smoke on the fish. I just like the natural taste of the fish. It’s so glorious.”