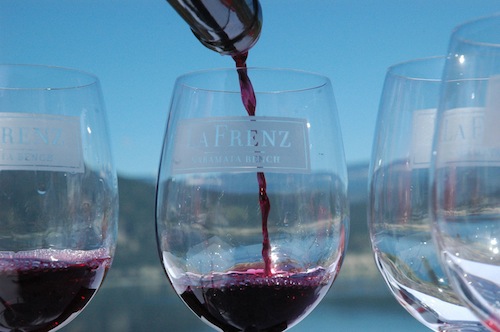 La Frenz wines are poured during an event atop Desperation Hill Vineyard on the Naramata Bench. (Photo by Andy Perdue/Great Northwest Wine)

“I don’t think the Canadians understand just how good their wines really are,” said Dan Berger, a wine journalist who lives in Santa Rosa, Calif.

Berger, who runs the Riverside International Wine Competition, certainly does.

At the conclusion of the competition two weeks ago, La Frenz Winery in Naramata, B.C., was awarded the Small Winery of the Year award. Owner Jeff Martin entered eight wines in the competition, and two won unanimous double golds, four won golds, one earned a silver and one received a bronze.

Berger determines the Small Winery of the Year by figuring the percentage of “high medals” – golds and silvers – earned during the judging. At 87.5 percent, La Frenz was the clear winner.

“It was pretty much a slam dunk,” Berger told Great Northwest Wine. 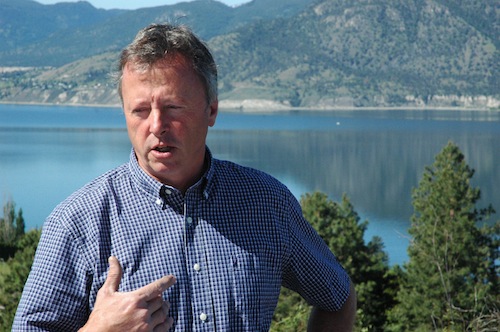 For his part, Martin was thrilled to show so well in a competition so far from home.

“That was pretty amazing,” he said. “We are really happy with that.”

It was Martin’s first time entering Riverside, but he is determined to show that British Columbia wines deserve to be on the same stage with other wine regions.

“When I first came to Canada, there was a vacuum and a lot of catching up to get up to world standards,” he said. “We’ve gotten to the point where the wines can sit on the table with anyone. To really gain credibility with Canadian wines, we need to put them on the international table.”

Martin, 56, came to British Columbia in 1994. The Australian native worked in Napa before coming north for “a two-year working holiday” that never ended. He worked at Quails’ Gate Estate Winery near Kelowna before launching La Frenz in 2000. Today, he and head winemaker Scott Robinson make 10,000 cases of wine on the stunning Naramata Bench.

“It’s a beautiful area, and we can make some seriously good wines here,” he said.

Martin isn’t kidding. Not far away is JoieFarm, whose 2012 Re-Think Pink was the sweepstakes award this year at Riverside for best rosé. JoieFarm, run by Michael Dinn and Heidi Noble, won a special distinction at the 2010 Riverside competition for displaying best regional character. In 2011, it also won the top rosé. And in 2010, its Noble Blend won best white wine of the competition.

And just south of nearby Penticton is Wild Goose Vineyards in Okanagan Falls, B.C., which last year won Small Winery of the Year at Riverside, as well as best white wine for its 2011 Gewürztraminer.

“B.C. wines always show at the top of the range,” Berger said.

This year, he was especially impressed with La Frenz, a winery he was only mildly familiar with through the Wine Press Northwest Platinum Judging conducted each fall.

“I was just so blown away,” Berger said.

Throughout the competition, he was given updates on wineries that won gold medals during the blind judging, and La Frenz’s name kept showing up.

“I ended up in the back room going through a bunch of their wines, and I was just floored by them,” Berger said. 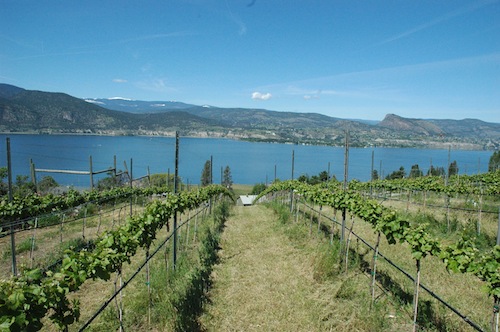 Vines on the Naramata Bench sweep down toward Okanagan Lake in British Columbia. (Photo by Andy Perdue/Great Northwest Wine)

The only frustration for Berger and other wine lovers south of the 49th parallel is getting the wines. Generally speaking, British Columbia wines are barely exported beyond the provincial borders – and almost never south in the United States. In fact, those wine lovers who understand the stunning quality of B.C. wines must travel to the Okanagan Valley and bring them home.

Martin said it is time for B.C. wineries to start sharing their wines a bit more broadly and at least get them into the Seattle and Portland markets.

“Those are obvious markets for us,” he said.

Vancouver and other Lower Mainland communities are the primary target of Okanagan Valley wineries, which makes them a bit of a mystery elsewhere.

“I think Canadian wines as a whole aren’t really known in the United States,” Martin said. “I think there’s an opportunity to open up the market and get over the perception we’re all living in igloos up here,” he added with a laugh.

Berger agrees – and he believes B.C.’s stylish white wines in particular would play well with the wine-savvy San Francisco crowd. Considering the results out of Riverside the past four years, he’s undoubtedly correct.