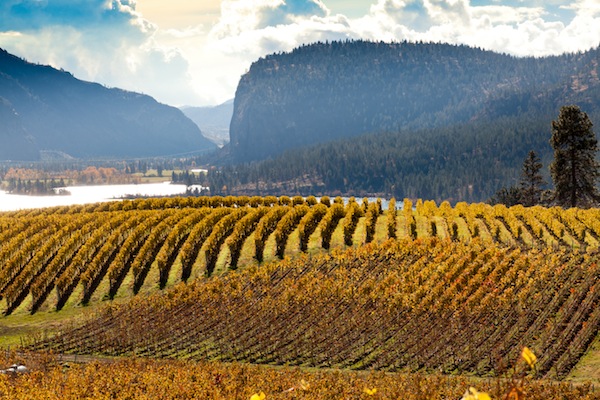 McIntyre Bluff north of Oliver overlooks some of the most important vineyards in British Columbia. (Photo courtesy of the BC Wine Institute)

The report, written by BDO Canada and distributed by the B.C. Wine Institute, showed 27,275 tons of grapes were harvested in 2012, an increase of 17 percent from the cool 2011 vintage.

Last year helped wineries recover from two short vintages. The 2012 harvest easily broke the record of 22,722 tons set in 2011, however that figure is largely the result of more available acres planted.

A better indicator of the previous most plentiful harvest came in 2008 when 22,275 tons were harvested.

Merlot continues to dominate in B.C., with 5,639 tons harvested last year, nearly twice the amount of the second most-popular variety – Chardonnay at 2,979 tons. Merlot accounted for 40 percent of red variety production, while Chardonnay made up 23 percent of harvested white grapes. 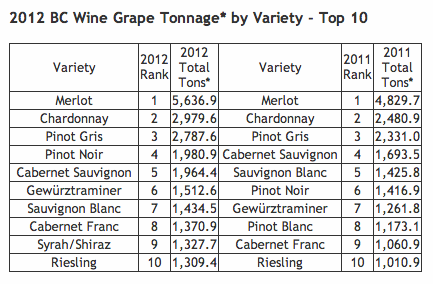 Information was gathered from voluntary reports filed by 110 winery members of the B.C. Wine Institute. There are 206 grape wineries licensed in the province, but the 132 BCWI member wineries reportedly account for 95 percent of the total wine production in the province.

Five years ago, 128 of the 152 wineries in the province responded to the survey, which remains a record number and record 84 percent, compared with the 53 percent in 2012.

“As we have compiled the Wine Grape Crop Report since 2008, we have been able to learn more about industry issues and appreciate the focus and drive of B.C.’s grape growers, winemakers and proprietors,” BDO representative Ken Davidson said in a news release.

This spring, a report indicated the B.C. wine industry contributed $1.4 billion to the economy in 2011. That year, 538 growers managed 9,867 acres of vineyards.