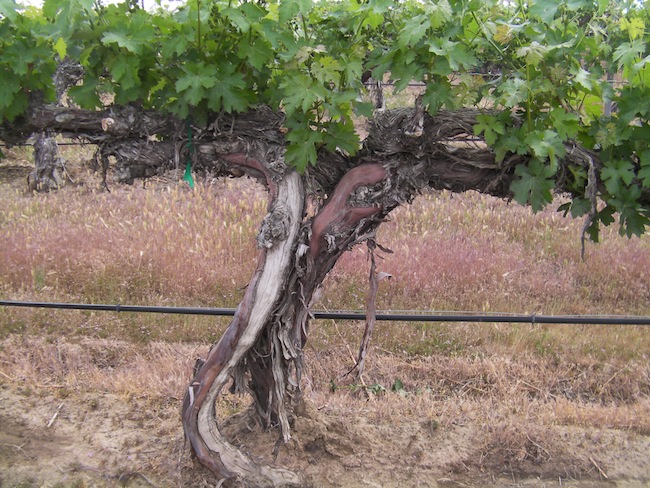 Riesling vines at Sagemoor Vineyards near Pasco, Wash., date to 1972, making them some of the oldest in the Pacific Northwest. (Eric Degerman/Great Northwest Wine)

PASCO, Wash. – Kent Waliser and Derek Way manage vines that have helped shape the course of grape growing and winemaking in Washington state. They also relish their role as caretakers of living history at Sagemoor Vineyards.

“These will be here long after we are gone,” Way said, pointing to gnarled trunks of Riesling that were planted 40 years ago.

Thanks in large part to Chateau Ste. Michelle – the world’s largest producer of Riesling – the noble Germanic grape has regained its stature and found new devotees in the Pacific Northwest and beyond.

Waliser and Way stand somewhere between proud and pleased as they talk with reverence, surrounded by 20 acres of Riesling that began to take root as shadows of the Watergate break-in began to take down the White House.

“This block is in Dionysus,” said Waliser, Sagemoor’s general manager since 2002. “It was planted in 1973 as some of the original plantings of these partnerships, and it’s Geisenheim 110 as near as we can tell, which is pretty much the standard Riesling clone in Washington. It’s planted in an older style, but our vineyard manager still coaxes some good tonnage out of the block, so we got some happy wineries like Long Shadows and Arbor Crest, Bookwalter, Rasa and a few other wineries. It’s kind of exciting to farm 40-year-old Riesling.”

These vines are a living legacy of the late Alec Bayless, a Seattle-area attorney whose fascination with farming led to the creation in 1968 of Sagemoor Farms. The vineyard was planted across the Columbia River from nuclear reactors that first helped end World War II and later fueled the Cold War. 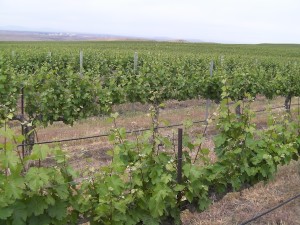 Riesling from Dionysus Vineyard thrives on May 15, 2013 east of the Columbia River north of Pasco, Wash. (Eric Degerman/Great Northwest Wine)

Sagemoor has grown to 800 acres, providing fruit to more than 60 wineries. And yet, Waliser and Way, his vineyard manager, go beyond caring for these vines merely scarred by winter events that devastated others, including the multi-week Arctic blast of 1978-79. Their scientific interest extends to what’s poured from the bottle.

On this morning, they staged a clinical tasting of Riesling, gathering 11 bottles from nine producers spanning three vintage. Two of the wines were “control” – fruit not from Sagemoor. They are looking for traits and signs of terroir as they evaluate wines made from Geisenheim clone 110, Geisenheim 198 and Neustadt 90, aka N90. One wine is 100 percent Dionysus G110. Another is a blend of G198 and N90 from sister planting Bacchus.

Waliser said he’s not shy about sharing their findings with the winemakers because their relationship is more partnership than grower and customer. After all, some wines are vineyard designate, carrying “Dionysus” or “Bacchus” on the label, so Sagemoor’s reputation is on the line as well as the winery’s.

Roots of old Riesling vines at Sagemoor extend beyond 40 feet

Consumers do pay attention and read the fine print of the labels because Riesling can provide a snapshot of a vintage, a vineyard and history, similar to Pinot Noir. 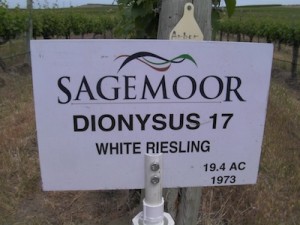 “An interesting aspect of this block is that for a number of years it was overhead irrigated,” said Way, a proud product of Washington State University and former Ste. Michelle employee. “What we’ve created here is an extensive root system – one you won’t see any more of, probably ever, because you wouldn’t want to take that number of years to create that root system. We have some roots that are over 40 feet long, so there’s a buffering capacity that makes this block very unique.”

That allows Dionysus’s Riesling vines to provide a level of self-regulation. There’s no fear that these old soldiers can run off and generate 10 tons to the acre.

The fascination with history doesn’t stop with this block, though. Downstream overlooking the Columbia River, near the farm’s administrative offices, there are 4 acres of Riesling that were planted in 1972. Waliser points out that one of Bayless’ partners in Sagemoor, the late Albert Ravenholt, acquired some material from another attorney — legendary W.B. Bridgman, who planted wine grape vines in 1917 near Sunnyside .

Fast-forward nearly a century, and so far, the mild Pacific Northwest winter and warm temperatures earlier in the spring could make the 2013 vintage more fruitful than some.