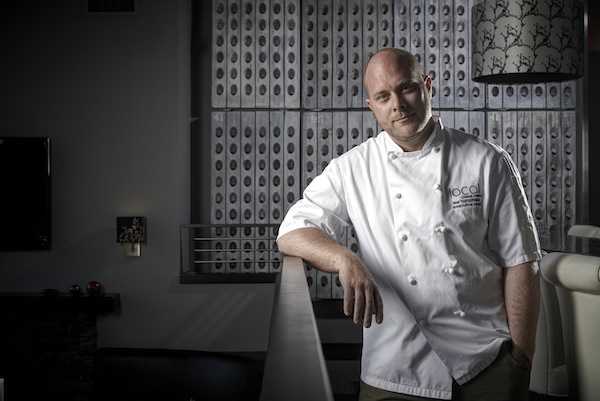 Lee Humphries, who has worked as executive chef at famed C Restaurant in Vancouver, British Columbia, has move to the Okanagan Valley to take over the culinary program at the acclaimed Local Lounge • Grille in Summerland. (Photo by Lionel Trudel/The Local Group)

Humphries will be just the second chef in Local’s four-year history. He replaces Paul Cecconi, who resigned earlier this year to open Brodo, his restaurant and catering business in nearby Penticton.

Humphries most recently served as executive chef at C Restaurant, one of Vancouver’s top spots for seafood. The star of the Kambolis Restaurant Group also is the founding restaurant of the Vancouver Aquarium’s Ocean Wise Program, which is devoted to sourcing responsibly harvested and sustainable seafood.

Originally from southern England, Humphries has spent his career in the food trade. His journey began at youth on the family farm in Cornwall and led him to restaurants in London, including Michelin-rated Westbury Mayfair Hotel on Bond Street.

He arrived in British Columbia more than a decade ago, a path that included working as sous chef for David Hawksworth at West and executive chef positions at FigMint, Opus Hotel’s Elixir and the Heather Hospitality Group.

“I want food we serve to be authentic yet sophisticated, with an emphasis on the bounty sourced from nearby farmers. Food should simply taste like it’s supposed to. That’s why Local Lounge • Grille is such a perfect fit as they’re all about taste,” Humphries said in a news release. “As a chef, the Okanagan is Nirvana. It’s an extraordinary community of sustainably minded farmers, truly handcrafted microbrews, boutique wineries, all in a breathtakingly beautiful valley that has a laid-back approach to life.  It truly is farm to fork. Here Local is not just a name, but a way of living.”

McWatters-Bond said, “We’re thrilled to have Chef Humphries lead our culinary team. As an active member of the Chefs’ Table Society, his like-minded philosophy for feeding the body and soul fits with our belief that Local is about being in the moment, and experiencing the best with loved ones.”