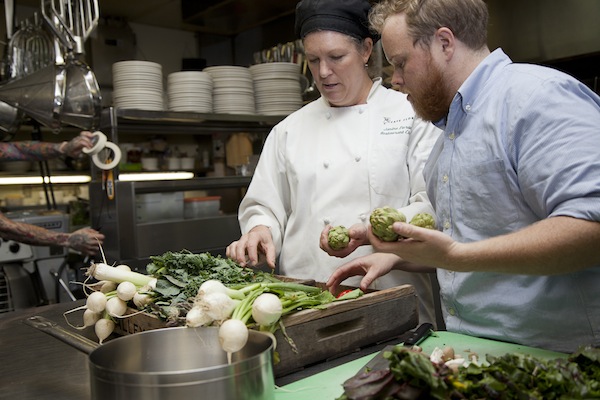 SEATTLE – Few restaurateurs in the Pacific Northwest seem to care as much about the environment and the wines they serve as Nat Stratton-Clarke at Seattle’s Café Flora.

“Northwest wines are one of the best things about the Northwest,” he said. “As a restaurant owner, it’s my job to promote the fantastic things that our region grows and makes.”

The restaurant has entered its third decade, and while the focus long has been on local produce and vegetarian cuisine, Café Flora started out as a “dry” establishment in 1992.

“When we opened, there was no alcohol at all, which I think is incredible,” Stratton-Clarke said.

That changed, and Stratton-Clarke has made certain that regional wines became a natural ingredient.

“I came here eight years ago as the general manager and really worked with the wine buyer on making sure that list really did have a Northwest focus,” he said. “Why are we going to reach to France or reach to Chile or reach to Australia when we can look when our own state or down the (West) Coast and find so many fantastic wines.”

An interesting twist is that Café Flora also buys produce – peppers and tomatoes – from Woodward Canyon’s estate farming operation in Walla Walla County near Lowden. Five years ago, Rick Small and his wife, Darcey Fugman-Small, celebrated their vineyard’s certification by the International Organisation for Biological Control.

“Is it sustainable? Is it organic? Is it Salmon-Safe? All those are questions we ask before bringing the wines into our list,” Stratton-Clarke said. “A lot of the ones that don’t necessarily have that certification? They are, but they just can’t afford the certification. We feel the same way about farms, and any farm that we buy from is a farm that I’ve visited.”

And while his diners can’t readily buy from some of farmers that Stratton-Clarke sources from, he hopes that the food-and-wine pairings developed by Doran and wine director Carrie Smith will inspire support of the wineries on the list.

“We’re always looking for the most sustainable product that we can buy and support and also to show to our guests,” Stratton-Clarke said. “We want our guests to get excited about that wine so they’ll continue that support at home by buying those wines and bringing them into their own homes and sharing them with their guests.”

Next month, Café Flora will be among the Madison Valley businesses participating in the Bastille Bash. The second annual event will feature Northwest wines poured at businesses along Madison Valley along with demonstrations by chefs such as Doran and James Beard Award-winning chef Thierry Rautureau of Rover’s and Luc, French music and street performers.

More than 2,500 attended the inaugural Bastille Bash. Stratton-Clarke said he’s hoping for twice that this second time around.