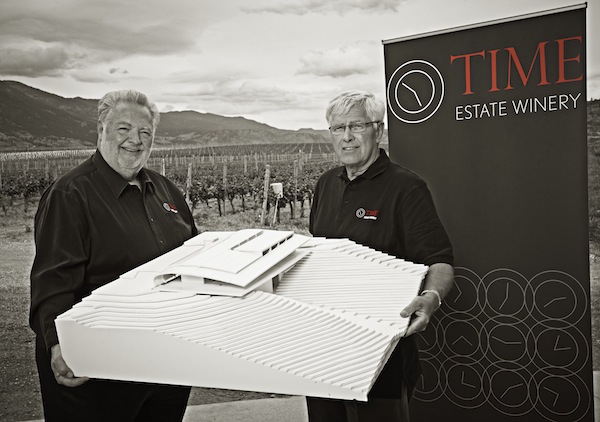 Harry McWatters, left, and renowned viticulturalist Dick Cleave hold the model for their Time Estate Winery in Oliver, British Columbia. The wines will be made from their estate Sundial Vineyard, which Cleave and McWatters planted on Canada’s famed Black Sage Bench in 1993. (Photo by Lionel Trudel/Courtesy of Time Estate Winery)

This week, McWatters rolled out the first releases from Time Estate Winery, the latest project based on his Sundial Vineyard on the Black Sage Bench in the southern Okanagan Valley near the town of Oliver.

And like so many of his projects, there’s a history of success and longtime friends behind it. This also gives McWatters a chance to retell the involvement of legendary viticulturalist Dick Cleave and business partner Bob Wareham, who came together back in 1992 to map out Sundial Vineyard.

“My financial advisers and friends thought we were crazy to pay the asking price for the land and then to plant unproven Bordeaux reds,” McWatters said in a news release. “We’ve achieved far beyond what I ever anticipated, and this project has re-energized me for what time will bring in the next 20 years.”

Time Estate Winery marks its debut with the release of three wines – a 2012 white Meritage as well as a Chardonnay and a red Meritage from the somewhat cool 2011 vintage. The Black Sage Bench is arguably the most bullet-proof viticulture site in Canada with its heat units, so ripeness is rarely an issue.

“Twenty years ago, it was a huge leap of faith to plant over 100 acres of vinifera grapes here,” Cleave said. “We believed however, this is the ideal place for Bordeaux reds – there’s a great aspect with a southern-facing slope, great terroir with sandy soils, along with the right combination of heat units and degree days.”

The influence of McWatters within the Canadian wine industry is unparalleled, and last winter he was presented Canada’s Diamond Jubilee Medal. In 1980, he founded the country’s first farm gate winery — Sumac Ridge Estate Winery in Summerland — and launched what is now the Okanagan Wine Festivals Society. He also established the Pacific Northwest trend with on-premise restaurants for wineries when he established the Cellar Door Bistro at Sumac Ridge.

He seems to be approaching Time with similar visions. McWatters hired CEI Architecture to design the production facility, which is projected to have a capacity of 30,000 cases. However, there will be more than just wine featured at Sundial Vineyard. Plans also call for a hospitality center with a commercial kitchen, four luxury guest suites and a lap pool with views of Lake Osoyoos and the Okanagan River Valley.

When completed, Time Estate Winery will not be out of place in the neighborhood, which includes showpiece properties such as Black Hills, Burrowing Owl and Church & State. Each winery has a tradition of producing Bordeaux-style reds that earn awards in United States competition.

“There’s still much more we want to experiment with as new clones and cultivars are developed,” Cleave said. “This year, we just planted Carménère and as we replant, we’re doing closer spacing, with a lower yield per plant and thus achieving much higher quality.”

Cleave and McWatters also have been leaders in transforming the Black Sage Bench. Vines were first planted there in 1964, which became part of the historic Becker Project in the 1970s. Two decades later, in 1992, McWatters and Wareham bought the then-fallow Monashee Vineyard and began transforming it.

This year marks the 20th anniversary of their collaboration with Cleave in the vineyard, a 115-acre planting of Bordeaux varieties that was the largest in Canada’s history. And the inspiration for Sundial Vineyard came from the government-sponsored pullout program of French hybrids as part of the North American Free Trade Agreement.

McWatters is founding chair for the B.C. Wine Institute and the Vintners Quality Alliance of Canada, which emerged in 1988 after NAFTA. In the 25 years since, the province has grown from 14 to more than 200 wineries.