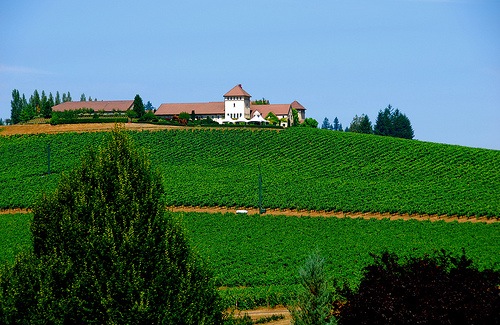 Note: This is the final installment of our four-part series on Northwest Pinot Gris.

Oregon winemakers are setting the pace and style for Northwest Pinot Gris.

While Pinot Gris has been around since David Lett of The Eyrie Vineyards planted some in 1966, it didn’t really catch on in a big way until King Estate came along in the early 1990s and made it a national phenomenon.

“We have no shortage of people who want to drink Oregon Pinot Gris,” said Steve Thomson, executive vice president for King Estate near Eugene.

King Estate makes 160,000 cases of Oregon Pinot Gris, which it sells in all 50 states and 25 countries. Winemaker Ben Howe can’t make enough of it to satisfy the market. 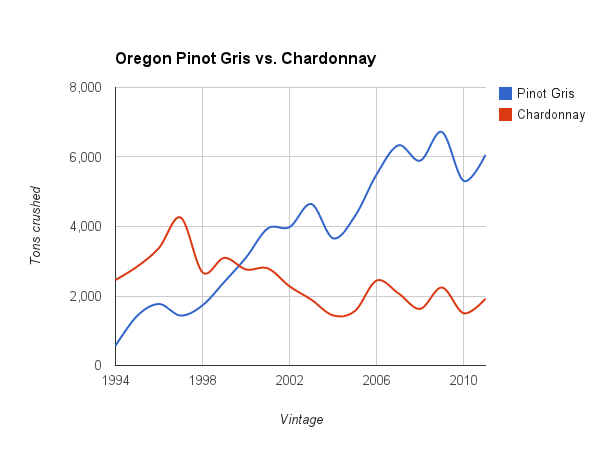 As Oregon Pinot Gris has increased, Chardonnay has dropped and flattened.

Pinot Gris has been Oregon’s white wine of choice since 2000, when production of the Alsatian white grape surpassed Oregon. Today, Oregon Pinot Gris tonnage is more than three times larger than Chardonnay and has grown fourfold since 1995.

And while Washington now has drawn even with Oregon – and even a bit ahead – the grape is much more important to Oregon winemakers who are setting the wine’s style in the Pacific Northwest. In Washington, Pinot Gris would appear to be more of an afterthought only because it is dwarfed in production by Chardonnay and Riesling.

That Oregon would turn to Pinot Gris as its white wine of choice makes perfect sense. Pinot Noir – long Oregon’s signature grape – is notoriously genetically unstable. Pinot Gris, Pinot Blanc and Pinot Meunier are all genetic mutations of Pinot Noir. Pinot Gris’ existence goes back to at least the Middle Ages in Burgundy.

Today, Pinot Gris is most famous in the Alsace region of France, the Alto Adige region of Italy – and Oregon.

And that genetic instability of Pinot Noir was passed on to Pinot Gris, which has spawned an entirely new grape variety indigenous to Oregon’s Dundee Hills. The mutation was found by Don Lange of Lange Winery, and he liked the flavors so much, he propagated it and now has nearly an acre of the legally unnamed variety that he has nicknamed “Pinot Pierre.” He bottles it by itself and gives it the proprietary name “Indigene” under his Domaine Trouvere label.

While Pinot Pierre will never catch on in Oregon, Pinot Gris looks mostly unstoppable. King Estate has taken the message of Oregon wine – particularly Pinot Gris – to the masses. And it has marketed Pinot Gris as a fresh, food-friendly alternative to Chardonnay, and it makes up more than 50 percent of King Estate’s total production.

“It has grown so much in the past 15 years,” Thomson said.

When King Estate began marketing Pinot Gris to Americans, it started on faraway coasts, then filled in the geographical gaps. It went to Louisiana, Texas, Florida and up the East Coast, where seafood lovers enjoy shellfish and want a wine that works well with it.

King Estate’s Pinot Gris typically gets a bit of sur lie aging, Howe said. It is done in stainless steel tanks for a few months, which gives the wine a bit richer mouth feel and more complexity, Thomson said.

Thomson describes the King Estate flavor profile as peach, melon and minerality with steely acidity. The sur lie aging will add a bit of a lemon custard note to it, he said. 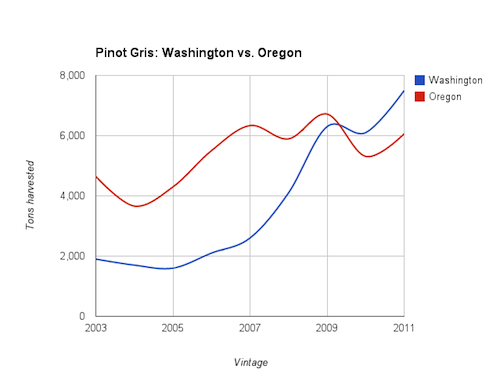 Howe and other winemakers said Oregon can pull in 2.5 to 3 tons per acre in cooler sites and up to 4 tons – vintage dependent – in warmer areas. This compares to anywhere from 4.5 to 6 tons per acre in Washington’s warm Columbia Valley. Because of this, Oregon’s price per ton for Pinot Gris is much higher than Washington’s – $1,350 vs. $765 – which means Washington wineries can often sell their wines at lower price points.

While King Estate’s Thomson said Washington’s size and price are threats, he also sees opportunities. For example, because of a shortage of Pinot Gris in Oregon, King Estate actually is exploring Washington as a source of fruit for its lower-tiered Acrobat brand. So far, Thomson and Howe are most interested in the Lake Chelan American Viticultural Area, whose grapes most closely match the Willamette Valley in flavor profile.

However, Lake Chelan has just 250 acres of wine grapes, and just a small amount of that is Pinot Gris.

“We’re experimenting with Lake Chelan Pinot Gris,” Howe said. “I think it’s an exciting region to work with. It’s a place we have our eye on. That kind of climate sounds pretty exciting for Pinot Gris.” 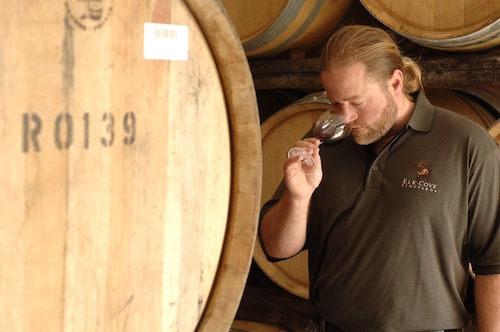 For Campbell, Pinot Gris is not an afterthought. In fact, he thinks it is a mistake to leave all the best land for Pinot Noir and use the marginal areas for Pinot Gris.

“It needs to be on hillsides with good drainage and exposure,” he said.

Campbell likes his Pinot Gris to exhibit classic stone fruit characteristics, sometimes slipping into tropical fruits such as pineapple and even lychee – but his preference is white peach. His choice for food pairing is the same as Pinot Noir: grilled salmon.

“Pinot Gris has body,” he said. “It can hold up to pork, chicken or salmon.”

Scott Jenkins of Duck Pond Cellars in Dundee could not agree more.

“I drink more Pinot Gris than anything else,” he said. “You can start drinking Pinot Gris when you’re cooking. The balance and body of the wine allows it to carry itself throughout the night. From steak to Italian to Indian to spicy Thai to whatever, Pinot Gris is world-class and goes with everything.”

Jenkins talked with Great Northwest Wine while he was on a sales trip to Mexico and said he has little trouble selling Pinot Gris there.

Jenkins and others are loathe to try to fit Oregon Pinot Gris into an Old World model.

“We have great fruit and incredible acidity,” he said. “It’s a unique style. It’s not French or Italian. It’s Oregon.”