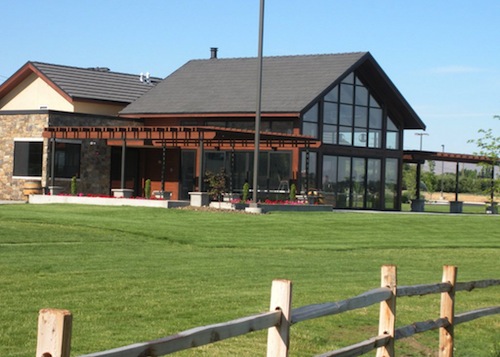 The Clore Center in Prosser, Wash., will honor Mike Hogue as its 2013 inductee to the Legends of Washington Wine Hall of Fame. (Photo courtesy of The Clore Center)

PROSSER, Wash. – Mike Hogue, who helped launch two Yakima Valley wineries and whose family has deep farming roots in the region, will be honored as the 2013 Legends of Washington Wine Hall of Fame inductee.

Hogue started Hogue Cellars in 1982 and helped launch Mercer Estates with the 2005 vintage.

He will be honored Aug. 9 at the Walter Clore Wine & Culinary Center.

Hogue joined his parents’ family farming business in 1964. He planted 6 acres of grapes in 1974, one of the early plantings in the modern Washington wine industry. Today, Hogue Ranches farms 1,200 acres of wine grapes in the Yakima Valley and Horse Heaven Hills.

Hogue partnered with Norm McKibben, a Walla Walla Valley grape grower and winery owner, to launch Hogue Cellars, and his brother, Gary Hogue, later joined the venture. The first vintage of Hogue Cellars was 2,000 cases of Riesling and Chenin Blanc. Today, the winery makes about a half-million cases of wine.

In 2001, Hogue sold the winery to Vincor International, a wine company in Canada, which later was purchased by Constellation Brands.

Hogue later partnered with the Mercer family – also a longtime Eastern Washington farming family – to launch Mercer Estates, not far from Hogue Cellars in Prosser. He recently retired from the business.

Hogue has been a board member of the Clore Center for many years and has served as its co-chairman.

The Clore Center is named for Dr. Walter Clore, considered “the father of the Washington wine industry.” Clore worked at Washington State University’s experiment station in Prosser from 1937 to 1976 and helped promote the planting of European wine grapes. After retiring from WSU, he became a consultant and was instrumental in many top vineyards in the state, including Canoe Ridge Estate in the Horse Heaven Hills and Cold Creek north of the Yakima Valley.