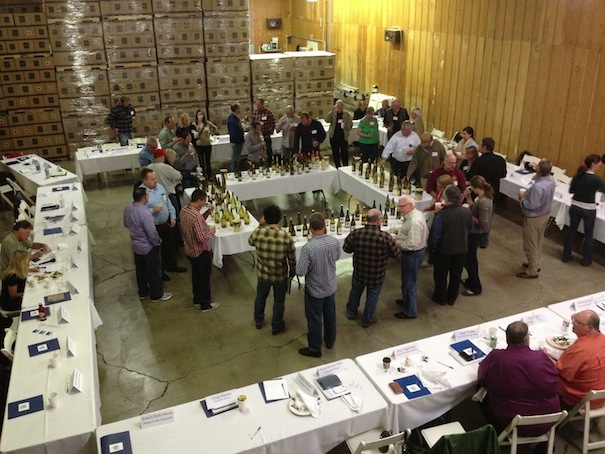 HILLSBORO, Ore. — David Adelsheim’s place within the history of Oregon wine seems defined by Pinot Noir and Chardonnay, yet he also was among the state’s first triumvirate for Pinot Gris.

He formed the trio with David Lett and Dick Ponzi. 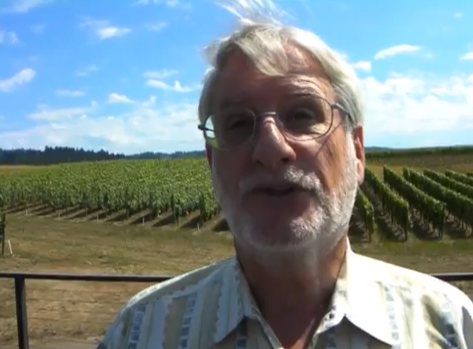 David Adelsheim celebrated his 40 years in the Oregon wine industry in 2011 with his Adelsheim Vineyards in the Chehalem Mountains near Newberg. (Andy Perdue/Great Northwest Wine)

“Ponzi had made a Pinot Gris in ’83, so in 1984, the three of us did a grand tasting at the Heathman Hotel of all the Pinot Gris available in Oregon at the time — all three of them,” Adelsheim said.

Last Thursday, Adelsheim, co-founder and president of Adelsheim Vineyard in Newberg, served as a presenter during the third annual Oregon Pinot Gris Symposium, staged at Oak Knoll Winery. Adelsheim’s talking points focused on plantings, price and the grape’s history in the Willamette Valley via the University of California-Davis.

When it comes to being able to tell a story that will help sell Oregon Pinot Gris, Adelsheim’s seems unparalleled. Lett died in 2008, but Adelsheim can tell much of the grape’s history in the Willamette Valley because he worked closely with “Papa Pinot” at The Eyrie Vineyards in Dundee throughout the 1970s.

“There were four rows when I worked for him in 1973, and those four rows were going into a wine called Pinot Gris,” Adelsheim said. “In the fall, André Tchelistcheff — the most important winemaker ever in California, at least if you are looking at the perspective of 1973 — was in his consulting mode for Ste. Michelle. He stopped by The Eyrie in 1973 and was very impressed with the Pinot Gris wine. He tasted from one of David’s stainless steel Coke (syrup) barrels and said, ‘Good Pinot Gris ought to taste like Winesap apples.

“That impressed me,” Adelsheim remembers. “Here was this famous person saying he really liked this Pinot Gris, so I needled David to see if I could get some cuttings and he agreed to give me some cuttings. I planted them in 1975, but the deal was I needed to sell him the grapes. After they started bearing in the late 70s, we sold him the grapes until 1984 when we finally had enough of our own grapes to make our own wine.”

Three decades later, the variety is producing wines in demand by consumers across the country and beyond.

Keys to Oregon’s future with Pinot Gris, Adelsheim told the symposium, include creating an Oregon style with this variety from Burgundy. Wineries also must develop an individual story — centered on a sense of place — if they are to successfully take the variety beyond the $20 per bottle price point.

“In Oregon, we could make varietal Pinot Gris but what does that mean?” he said. “Varietal Pinot Gris is something that is sold to distributors and is called ‘Oregon’ or ‘Willamette Valley,’ but I can tell you one very important thing about this wine. It’s price can never be more than $20 retail to the consumer. Ever. That price ceiling is in place for any white wine that is a varietal white wine made anywhere in the world with the exception of one variety — Chardonnay — and potentially residually sweet wines in places like Alsace.” 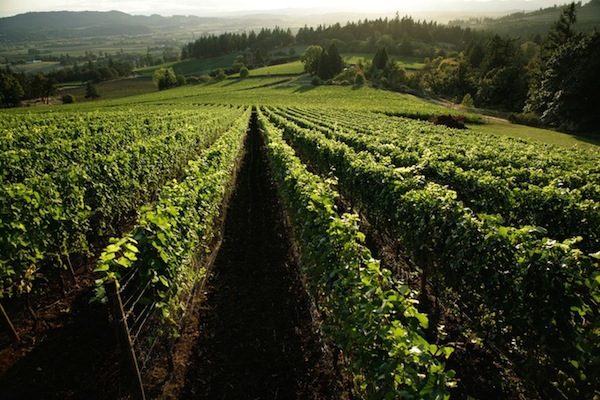 The Adelsheim 2011 Pinot Gris from the Willamette Valley retails for $19. It marks Adelsheim’s 28th commercial vintage with the variety, and the production of 16,000 cases came from an assemblage of 12 vineyards.

“The quantities were so teeny at the beginning but it sold because it was so rare and nobody had heard of this grape variety, and this was before Pinot Grigio came to the U.S.” Adelsheim said. “It was a very adventuresome thing. We were selling a wine that no one else was making, and making far less of it than Chardonnay or Riesling.”

“I think the big change in Pinot Gris as (Oregon) presented it,” Adelsheim said, “was really led by Ed King (III) at King Estate. They came up with the Pinot Gris cookbook and focused on the matching of food and wine as a means of selling.”

Most of the winemakers attending the symposium raised their hands when asked how many are selling through their Pinot Gris. And just as King Estate, wineries would like to make more and charge more, but where will those grapes come from is a growing problem. For example, King Estate is looking to Washington’s Lake Chelan as a source for its Acrobat brand.

“The percentage of Pinot Gris planted has not changed all that much from 1997 to today,” Adelsheim said. “The acreage has gone up, but the percentage has not. What has changed is that Pinot Noir has become an ever more dominant variety. It’s taking up 62 percent of the state and 72 percent of what’s planted in the Willamette Valley, while Riesling and Chardonnay have continued to diminish.”

One attendee asked Adelsheim if Oregon’s large percentage of Pinot Noir plantings may pose a problem, particularly with Pinot Gris.

“This kind of dominance of a single grape variety makes this arguably the region of the world most dominated by a single grape variety, certainly in the New World,” Adelsheim said. “There may be some places in the Old World like Piedmonte and Burgundy where a single variety might be grown, but 72 percent is far (higher percentage) than Cabernet (Sauvignon) is in Napa (40 percent).

“This complete dominance by any one variety begs the question of whether any variety — Pinot Gris or anything else — can gain customer awareness,” Adelsheim said.

However, virtually every other wine region in the world would like to be able to market itself as well as Oregon Pinot Noir, akin to Napa Valley Cab.

“The rest of the New World wine regions look to Oregon with envy because of the dominance of Pinot Noir and our ability to have used that to establish greatness over the course of just four decades,” he said.

And vineyard-designate Pinot Noir from Oregon often expresses a sense of place and routinely makes for an interesting story to tell.

“I would argue that the thing that Pinot Noir has showed us in Oregon is that you can compete when you are talking about place,” Adelsheim said. “If place is most important when you are talking Pinot Gris in Oregon — which arguably we’ve not done in Oregon — but if we were to do that, could we establish both style and value that would make it possible to break through that glass ceiling of price (at $20)?”

Going above that would most likely require a vineyard-designate program for Pinot Gris. There are few wineries to venture down that path with Coelho Winery in Amity.

“We haven’t braved this,” Adelsheim said, “but I’ve heard of a couple of people who have started to look at reducing the amount of Pinot Gris they make and focusing on a single vineyard from which it comes, a great estate vineyard they have great pride in telling the story about that wine. The story will first have to be told direct to consumers because fundamentally this kind of wine requires a much longer story other than ‘Here’s a Pinot Gris from Oregon.’ It has to be story of why this place makes this wine and why this place is special — and that takes more than one sentence.”

“If we are competing with Ste. Michelle to make varietal Pinot Gris or wineries in California or competing with Italy, I’m guessing we will lose that fight,” Adelsheim said. “We cannot out-produce those places in terms of quantity. We can talk about styles, but at some point. people will look at price and do the math at 3-, 3 1/2-, maybe 4 tons an acre. This year may be 4 1/2 (tons per acre), but we can’t make money in our wineries and in our vineyards year after year after year with low crop levels like that. We are competing with regions where they have 7-, 8-, 9 tons per acre or eastern Washington where 5 (tons per acre) is kind of a low crop level.”

At this point, King Estate seems best positioned to continue flying the flag for Oregon on the global scene.

“I can tell you in my mind there are probably 150 grape varieties from northern Spain, Italy, Germany, Austria and northern France that we could plant and make very lovely white wines,” Adelsheim said. “Pinot Gris, for reasons of opportunity, we were the first region in the New World to plant significant lots of Pinot Gris and Ed King decided to focus his winery on that variety. Oregon has a lot more Pinot Gris than we would have if we had started to plant today.”

Oregon Pinot Gris in French oak ‘not the answer’

Near the end of his presentation, Adelsheim was asked if the Oregon Pinot Gris Symposium would exist in any form were it not for King Estate’s dedication, ability and marketing prowess.

“Probably not,” he said. “They were the first winery to say this is so important that we’re going to focus more energy on Pinot Gris than Pinot Noir. We can debate whether that’s a good idea or not, but that’s what they chose to do. And all of us who made Pinot Gris got a free ride.”

“Pinot Gris is a great wine in one place in the world — Alsace,” Adelsheim said. “And we are not Alsace. We don’t have the particular climate of Alsace. Can we imagine a great wine in our climate that is the parallel to the great wine that is Pinot Noir — even though our climate is not Burgundy? Maybe there is that possibility, but nobody is showing us that direction.

“Nobody has revealed the path of greatness for Willamette Valley Pinot Gris, and arguably that is much, much harder with white grapes,” he continued. “Chardonnay has this combination of mystique and French oak barrels. That combination has allowed it to generally break that ($20) glass ceiling. But putting Pinot Gris in French oak is not the answer.”