A wine name that once was trendy on the West Coast now is nearly gone, at least in the Pacific Northwest.

Back in the late 1960s, famed winery owner Robert Mondavi called his Sauvignon Blanc by a new name: Fumé Blanc. It was a name he made up, and it was purely for marketing purposes.

“It wasn’t just a question of reputation,” said Rob Griffin, owner/winemaker of Barnard Griffin Winery in Richland, Wash. “It was a question of style. Sauvignon Blanc in the Napa Valley was made in the ‘chateau style,’ which typically ran about 3 percent residual sugar. (Mondavi) created Fumé Blanc to not only distinguish himself but also to differentiate the style.”

The name took off, and soon many wineries up and down the West Coast were using the name. One of them was Griffin.

“It was a convenient approach to marketing,” Griffin said.

Griffin, a California native who grew up not far from the Napa Valley and earned his winemaking degree at the University of California-Davis, came to Washington in 1977. One of the first things he did was make a Sauvignon Blanc for Preston Wine Cellars north of Pasco – and he called it Fumé Blanc.

“That was a very popular wine at Preston,” he said.

When Griffin moved on to Hogue Cellars in 1984, he convinced owner Mike Hogue that they should make a Sauvignon Blanc – and call it Fumé Blanc. It wasn’t easy getting the boss to agree, though he finally did.

“Sauvignon Blanc was an expensive grape back then,” Griffin said.

Fumé Blanc became a successful wine for Hogue throughout the years, becoming the winery’s go-to dry white for many of its fans.

Today, Hogue head winemaker Co Dinn makes about 30,000 cases of Fumé Blanc. Only he stopped calling it Fumé Blanc with the 2012 vintage.

That leaves Barnard Griffin and, as far as we can tell, Facelli Winery in Woodinville as the last two Washington wineries using that name on the label.

Jean Yates, owner of Avalon Wines in Corvallis, Ore., has fond memories of Fumé Blancs being the first “grown-up” wines she drank after college, back in the 1980s.

“At the time, the name ‘Fumé’ was big business to California wines,” she told Great Northwest Wine. “It was usually made a little drier than wines labeled “Sauvignon Blanc” and was a bit more expensive. I thought I was very sophisticated to drink it.”

Today, she said, the marketing appeal of the name “Fumé Blanc” has faded. She does see some wines labeled “Fumé” coming from the Southern Hemisphere, particularly Argentina.

Oak vs. no oak

There has long been a perception that Fumé Blancs were aged in oak, while Sauvignon Blancs were not. That is unlikely, said Griffin, who hasn’t used oak on his Fumé for at least 15 years. In fact, he cheerily recalls a seminar many years ago at a Ritz-Carlton in Southern California that debated Fumé Blanc vs. Sauvignon Blanc. Famed wine journalist Robert Lawrence Balzer was part of the panel.

“People were pontificating endlessly for an hour,” Griffin recalled. “Finally, Robert Lawrence Balzer stood up and said, ‘This is boring, and I have to pee,’ and he walked out.”

That ended the debate with roars of laughter.

Barnard Griffin Fumé Blanc made in Loire style – sort of 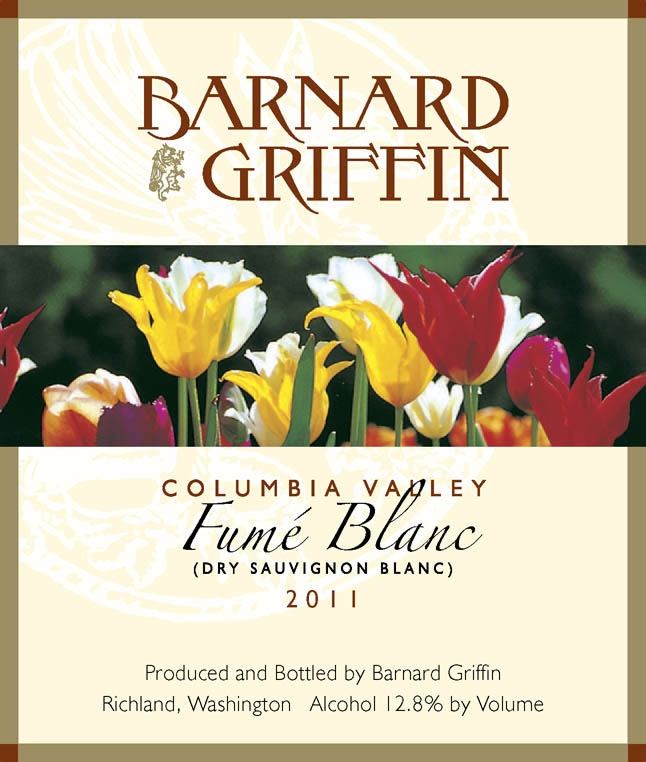 Griffin has long admired Sauvignon Blancs from France’s Loire Valley. In fact, Pouilly-Fumé wines made from Sauvignon Blanc grapes undoubtedly were Mondavi’s inspiration for the name he bestowed on his version.

Griffin likes to blend Semillon with his Fumé, which is not traditional in the Loire.

“It’s not necessarily a Loire wine,” he said. “It’s the best imitation of a bastardization.”

These days, Griffin makes about 10,000 cases of Fumé Blanc, and he sees no rationale for changing the name, even if New Zealand winemakers have made their reputation with the grape by calling it Sauvignon Blanc.

“I don’t think it’s harming us in the marketplace,” he said.

Griffin gets much of his Sauvignon Blanc from Sagemoor Vineyards north of Pasco, which he thinks is the best place to grow it in the state. Unfortunately, Sauvignon Blanc fruit is becoming increasingly difficult to find, Griffin said. The price per ton has barely changed over the years – it was $784 per ton in 1985 and $852 last year – and the tonnage hasn’t changed much in the past decade.

Last year, Washington crushed 5,100 tons of Sauvignon Blanc, firmly behind Pinot Gris as Washington’s No. 4 white grape and its No. 7 grape overall.

“The fruit is getting harder to come by,” Griffin said. “More people want it. It’s not planted to the degree it used to be.”