Kevin Pogue, professor of geology at nearby Whitman College, served as the opening presenter as the Walla Walla, Wash., event. In the past decade, he’s also developed into a consultant sought after by grape growers and winemakers throughout the region, so it made sense to have him speak at the Powerhouse Theatre regarding how geology, climate and soils influence grape growing and winemaking two of North America’s most wine regions.

“I was run out of northwestern Pakistan by terrorists and now I am a terroirist,” Pogue told the audience. “There’s irony there.”

His 21-minute presentation helped define “terroir” for those in the theater, and the Kentucky native said he appreciated the opportunity to drill down on the topic that includes geography, soil and climate.

“Terroir, it’s a very misunderstood concept and utilized by the press a lot of the times in ways maybe it shouldn’t be,” Pogue said.

While many of his peers have no problem defining terroir, describing the Walla Walla Valley is different, he said.

“For the last eight years, I’ve been going to Europe for the International Congress in Terroir, where about 300-400 terroirists meet and discuss the signs of terroir. Generally, I’m one of two or three Americans there.

“The question I always get is, ‘Where is Walla Walla? And what kind of grapes do you grow there. Most Europeans know wines from the United States, but they only know Napa Valley. And they always want to know, ‘Well, how do you compare to Napa Valley?”

Pogue, who speaks at Northwest wine industry events such as the Washington Association of Wine Grape Growers and Taste Washington, titled his Celebrate Walla Walla program ‘The Tale of Two Terroirs.’

“There are many terroirs in each place, and it’s not a simple thing of saying, ‘This is Napa and this is Walla Walla, and this is how they are different,” he said. “It’s like trying to describe the differences between San Francisco and Seattle. They are big and complex places. There are neighborhoods. If I’m comparing Seattle to San Francisco, do I compare Capitol Hill to the Castro or Ballard to the Mission District?”

Those neighborhoods could be akin to the establishment of American Viticultural Areas by the federal government, a declaration similar to appellations in France.

“Those are based on terroir hopefully, although marketing plays a huge influence,” said Pogue, who has written the application for the Walla Walla Valley’s first sub-appelation, The Rocks of Milton-Freewater.

“I designed it to be what I think is the most single-most terroir-driven AVA in the United States,” Pogue said.

And there are many layers of complexity to the AVAs of Napa and Walla Walla.

“Anyone who knows Napa Valley knows that Carneros is a much more different places to grow grapes than, say, Mount Veeder and have different characteristics,” Pogue said.

The same can be said for more than just the proposed “Rocks” of the Walla Walla Valley.

“We have a lot of potential to break ourselves out into regions over time,” Pogue said. “Looking east toward the Blue Mountains of Walla Walla Valley, we have very different terroirs. We have the valley floor, we have alluvial fans. We have steep canyon walls, and we have the foothills of the Blue Mountains.”

That “physical terroir,” Pogue called it, plays a major role in determining what type of grapes should be planted where. Elevation and latitude are among those factors. The Walla Walla Valley AVA ranges from 400 to 2,000 feet of elevation. In Napa, it ranges from sea level to 3,000 feet.

At that pont, he showed a slide about latitude, which explains why the summer solstice effect on the Walla Walla Valley traditionally means 56 more minutes of sunlight.

“I always have to get in a little dig at my friends in Napa,” Pogue said. “In Walla Walla, our nearest neighbors are Bordeaux and Burgundy, and their neighbors are in Etna (on Sicily) latitudinally,” which created laughter. “So they are pretty far south for a wine growing region in Europe.

He closed that topic by adding, “It’s not a good comparison.”

There’s definitely room to grow in the Walla Walla Valley, and Pogue seems positioned to help.

When it comes to climate, each region excels for different reasons.

“We have a more continental climate,” Pogue said. “We have a lot less precipitation, and we’re a little bit cooler. 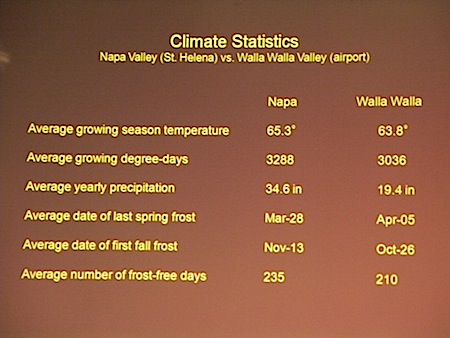 At that point, he described the continentality.

“It’s a way to measure our biggest difference,” Pogue said. “We have a stronger contrast between the seasons. It gets colder here and warmer in the summer. The change of seasons is a lot faster, and causes us to have these scary frost events — like we had a few in April.

“It’s not as big of deal in Napa because their climate is moderated by the proximity of the Pacific. San Diego is probably the place in the United States that has the lowest continentality – the lowest variation between seasons.

In July and August, Walla Walla surpasses Napa Valley in terms of average temperature. However, Walla Walla is considerably colder in the winter.

And in terms of precipitation, the Napa Valley gets 26-30 inches per year.

“Every place in Walla Walla gets much less than the driest place in Napa Valley,” Pogue said. “We are farther from the ocean, we’re not as close to the moisture supply.

“What we don’t have here and Napa does have that’s a big influence on their climate is coastal fog,” he added. “It does a lot to cool Napa Valley in the mornings and keep it from getting as hot as it might.”

All in all, the Napa Valley enjoys a three-week growing advantage, “but it’s still long enough to ripen the grapes,” he said.

Perhaps the most important difference between the two regions comes down to soil types. Those soils, combined with the cold winter, keep the wine industry’s most heinous pests out of the Columbia Valley.

“We don’t have phylloxera here, which is a very nasty little bug that kills grapevines,” Pogue said. “North American grape varieties are resistant to it, and most grape vines all around the world are grafted on to North American roots. We are one of the largest areas in the world where grapevines are growing on their own roots.”

And there’s the fascinating story of how the Walla Walla Valley got its soil.

“In the Walla Walla Valley, we have basalt, Ice Age floods sediment and wind-deposited silt and Napa Valley has very complex geology associated with movements of the San Andreas Fault,” he said. “Being a very active geologic area, they have several fundamentally different kinds of bedrock.

“The soils of the Napa Valley are the result of millions of years of breakdown of the bedrock, a traditional soil forming process where the rock slowly decayed by weather — and soil is produced.”

It’s the search of terroir that continues to help shape and define the Northwest wine industry.

“Vineyards have been put in to take advantage of all these different terroirs,” Pogue said.