Co Dinn has left his job as director of winemaking for Hogue Cellars to start his own winemaking business. (Photo by Andy Perdue/Great Northwest Wine)

PROSSER, Wash. – One of Washington’s largest and oldest wineries is making a change at the top.

Co Dinn, longtime winemaker for Hogue Cellars in Prosser, announced he is leaving the half-million-case producer. His last day was Thursday.

“Everybody has lots of things they want to do in their life and career,” Dinn told Great Northwest Wine. “One of the things I wanted to do eventually was to go into business for myself. I wanted to do it while I still have lots of energy and time.”

Dinn will launch a small consulting and custom-winemaking business and perhaps will start his own brand.

“There’s going to be a growing need for smaller custom winemaking in the Yakima Valley,” he said.

He plans to build a base of moderately small clients who want the expertise of someone with nearly a quarter-century of winemaking experience.

Dinn said he began talking to Hogue about leaving nearly four months ago. Leaving now gives Hogue Cellars time to transition to finding a new director of winemaking. It also affords Dinn the opportunity to begin securing grape contracts before harvest begins in less than 10 weeks.

Dinn, 52, grew up in Texas and earned is bachelor’s degree at the University of Texas in Austin. After working in the oil and gas business in Oklahoma, he decided to move west and take up winemaking.

In 1996, Dinn was lured to Washington to become Hogue Cellars’ white winemaker, joining an all-star team that included Wade Wolfe as general manager, David Forsyth as director of winemaking and Tony Rynders as red winemaker. At the time, Hogue Cellars was owned by Mike Hogue.

“It was a great opportunity to come to Hogue, and I’ve never regretted a minute of it,” Dinn said.

Hogue Cellars was sold to Vincor International of Canada in 2001, and Vincor later was purchased by Constellation Brands, one of the world’s largest wine producers, which owns such wineries as Robert Mondavi, Clos du Bois, Mount Veeder, Woodbridge and Toasted Head. In British Columbia, it controls  Jackson-Triggs, Nk’Mip Cellars and Sumac Ridge. 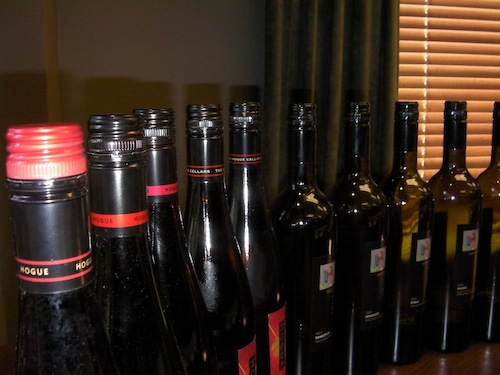 During Co Dinn’s tenure at Hogue Cellars, the Yakima Valley giant became one of the nation’s first large producers to switch most of its production to screwcaps. (Photo by Andy Perdue/Great Northwest Wine)

Within a few years, Wolfe left Hogue to focus on his own winery, Thurston Wolfe. In 2007, Forsyth followed Mike Hogue to his new venture, Mercer Estates, and Dinn was elevated to director of winemaking, where he oversaw the production of 550,000 cases of wine annually.

Dinn said that through the years, he had opportunities to move back to California to make wine, but he grew to enjoy Washington wine country and being part of an industry that has been on a strong trajectory in both quality and quantity. When he arrived in Washington, the state had fewer than 100 wineries. Today, there are more than 750.

“It’s been a real rocketship ride, a lot of fun,” Dinn said.

During his time at Hogue, the winery became one of the nation’s first large producers to move primarily to screwcaps in 2004. Dinn was part of the team that tested the closures for several years.

After he takes a week of vacation to clear his mind, Dinn plans to get to work on his next winemaking adventure, which will include talking with grape growers and securing some fruit come September and October. He plans to be based in the center of the Yakima Valley, where he will have easy access to fruit from the Horse Heaven Hills, Wahluke Slope and Columbia Basin.

He doesn’t believe transitioning from making 550,000 cases to a few thousand will be difficult, as Hogue long has produced small-lot vineyard-designated and reserve wines of just a few hundred cases.

“It’s the kind of work we’ve done as long as I’ve been at Hogue,” he said. “it’s just not what everybody sees.”

Now, he will be able to focus on a few barrels without having to worry about 150,000 cases of Riesling.

“I want to be my own boss and call my own shots. That’s the real driver.”

Hogue has not yet announced a new director of winemaking.