PORTLAND, Ore. – Many vintners in Oregon aren’t shy when they say, “It takes a lot of good beer to make great wine,” so winemakers and beer lovers will appreciate knowing that July marks Oregon Craft Beer Month. 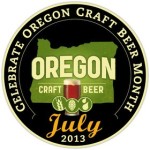 In fact, Dick Ponzi, founding winemaker for historic Ponzi Vineyards in Dundee, launched the state’s first craft brewery – BridgePort – in 1984. He sold it in 1995.

The Beaver State boasts more than 200 brewpubs and/or breweries throughout 60 cities, and according to Watershed Communications in Portland, there are 500 events and counting during this month.

Oregon Craft Beer Month begins at 6 p.m. today with a toast at McMenamins’ Mission Theatre in Portland. There will be a virtual toast through Google On-Air Hangouts during the event.

Twitter – @Oregoncraftbeer – and Instagram users are encouraged to use the hashtag #OCBM to boast what they’re toasting with and drinking during July.