WAPATO, Wash. – During the past 30 years, Juergen Grieb has probably made as much wine as anyone in Washington – yet few people knew who he was until 2010 when he went out on his own and launched Treveri Cellars.

Today, Grieb is enjoying incredible success making sparkling wine at his winery near Yakima, more than doubling his production in each of his first three years.

Grieb was born in Trier, West Germany. In the 1970s, he earned degrees in still and sparkling wine and began working in the German sparkling wine industry, where he received important direction at an early age.

“I learned from a really old guy,” Grieb said. “He was an stubborn old German guy, but he showed me everything he knew.”

In 1983, Grieb was brought to Washington by Wolfgang Langguth, a famed German Riesling producer who was setting up shop on Washington’s Wahluke Slope to make Riesing – then Washington’s No. 1 grape. This was before the Antinoris arrived in Washington or the Drouhins came to Oregon. It was the first European wine company to try to stake its claim in arid eastern Washington.

“It was one of the most famous wineries in Germany,” Grieb said. “When they opened in Mattawa with 500,000 gallons in the early 1980s, that was a huge winery for Washington state.”

At the time, the Langguths made a dry Riesling in an region that still preferred off-dry wines – and red wines in Washington were nearly nonexistent.

“Times sure have changed,” Grieb said with a chuckle.

The wines did not resonate with American consumers, and Langguth’s Washington winery eventually failed.

From Langguth to Coventry Vale

Grieb stayed at Langguth until 1987, when the winery was sold and ultimately went bankrupt. The Washington wine industry was small back then, and nobody was hiring, so Grieb did a bit of consulting and even worked for a juice company for a while. In 1991, he began working for Coventry Vale in the Yakima Valley town of Grandview.

Coventry Vale is a large wine producer that few have heard of, providing custom-crush services for many wineries, especially those under the Ste. Michelle Wine Estates banner.

For a few years, Coventry Vale also had its own label, and that included sparkling wine, so Grieb got to keep his hand in that game throughout the years. Grieb was Coventry Vale’s head winemaker and vice president and worked there for nearly 20 years.

The old Langguth property ended up being purchased by Ste. Michelle and was used for such brands as Snoqualmie and the now-retired Saddle Mountain label. Ironically, it’s now owned by Coventry Vale.

In 2010, Grieb stepped from behind the shadows when he launched Treveri Cellars. He named it for his hometown of Trier on the Mosel River. Back in the 300s, it was known as Treveris.

“My family still lives there,” he said. “I have a lot of ties there.”

He noted that the name sounds Italian, but he thought it would be a better marketing move than naming it “Grieb Cellars.” An ancient Roman coin on the label is an actual coin found in the Mosel River during construction of a bridge in Trier. The coin is on display in Treveri Cellars’ tasting room.

In 2010, Grieb made 1,000 cases of sparkling wine. He entered all four of his wines in a Wine Press Northwest magazine sparkling wine judging in early 2011, and three finished with a top “Outstanding” rating, with Treveri Cellars’ Blanc de Blanc extra-sec sparkling Pinot Gris earning the distinction of top sparkling wine.

“I’ve always loved making sparkling wine,” he said. “I knew if I was going to start doing this commercially, I wanted to have a reasonable price that people could afford and a good-quality sparkling wine. I knew this was a niche market, but honestly, I’m now realizing it was the right thing to go into. Nobody is doing it the way we’re doing it.”

Already, he is selling Treveri Cellars wines across the country, including Virginia, Pennsylvania, Montana, Oregon and Idaho, as well as abroad in Denmark, China, Japan and Taiwan.

“I wish,” he said with a grin. “I would really love to sell in Germany, but it is so price competitive.” 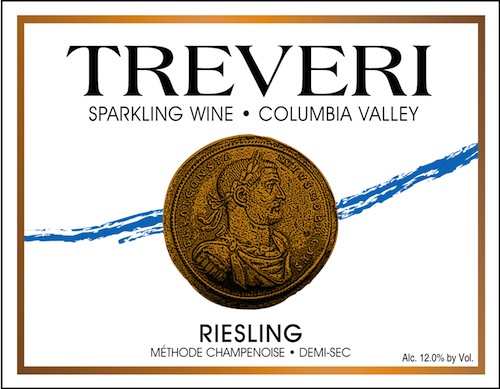 On the West Coast, Grieb is competing with such brands as Korbel, Domaine Chandon, Barefoot Bubbly and Schramsberg. And in the Pacific Northwest, he is up against one of the largest bubbly producers in America with Domaine Ste. Michelle at 300,000 cases, as well as Mountain Dome in Spokane and Argyle in Dundee, Ore.

But he competes by being different. Whereas most serious sparkling producers stick with classic Champagne varieties Pinot Noir and Chardonnay, Grieb’s efforts run the gamut, including:

They range in price from $14 to $19, and the style is what he describes as Germanic, with more emphasis on crisp fruit and less on yeasty qualities. He also makes a couple of red bubblies, which are rare outside of Australia. In addition to the sparkling Syrah, he makes a small amount of sparkling Petit Verdot that comes out during the winter months.

Treveri Cellars rosé to be served by State Department 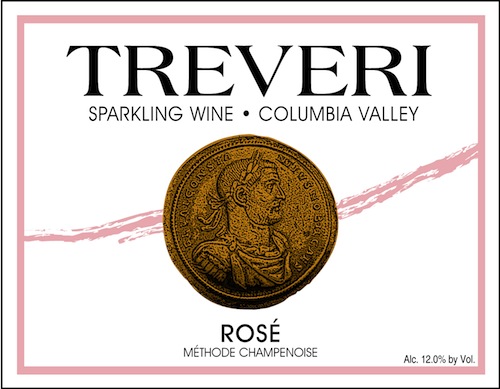 In addition to rave reviews from wine critics, Grieb’s efforts also are catching the eye of officials in the nation’s capital. Last week, he was informed that his sparkling rosé will be served at the State Department’s July 4 festivities this week with Secretary of State John Kerry. This is the second time he has been honored with being served by the State Department – the first being by Hillary Clinton in 2011.

And next month, his wines will be served at the James Beard House in New York City for the second time.

Grieb’s son, Christian, is now working by his side at the winery and earning his winemaking degree online at the University of California-Davis. He has a degree from the University of Washington. The young Grieb, 24, got married a couple of weeks ago. His father assured Great Northwest Wine that no Cook’s Champagne was served.

How much does Grieb want Treveri Cellars to grow?

“I haven’t quite determined that,” he said. “I want it to be a national brand. I could see us growing to 15,000 to 20,000 cases. As long as we keep producing good-quality sparkling wine, I’ll continue to grow.”