“Combining this with the condition of our vineyards and the fact we are three weeks advanced phenologically generates excitement,” said Jones’ father, Earl, owner and founding winemaker of Abacela in Roseburg.

Most wine grape growers in Oregon wield precise control over irrigation, but warm weather and the all-important growing degree days are out of their hands. According to Jones’ report, vineyard managers in Oregon and throughout the Pacific Northwest can expect above-average temperatures this summer.

Oregon wine industry can expect more of same this summer

“The 30- to 90-day forecasts through late-summer (July-Aug.-Sept.) are showing the western US to have a continued greater likelihood of being much warmer than normal with drier than normal conditions, especially over the PNW,” Jones wrote.

His research includes data from the Climate Prediction Center, based on work by the National Oceanic and Atmospheric Administration and the National Weather Service, which monitors and forecasts short-term climate fluctuations and provides information on the effects climate patterns can have on the country.

Jones, whose work continues to elevate the Department of Environmental Studies at the Ashland school, pointed out that the month of June perpetuated a warmer growing year in 2013, particularly in Oregon.

“For those in Oregon, our June growing degree-day numbers have continued their above normal trend, running 13-25% above the average of the last 10 years, while year to date precipitation is down 35-50%.” 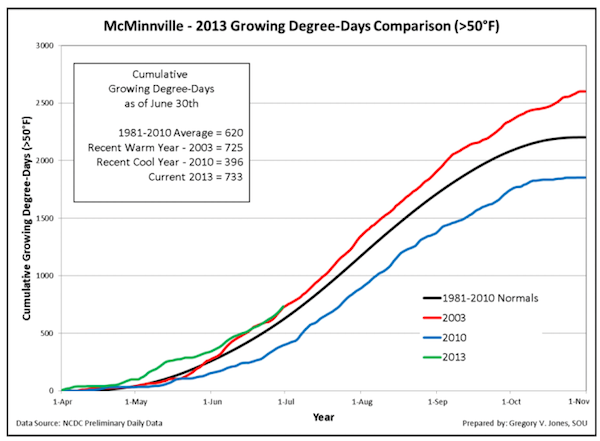 Jones’ data for McMinnville in the Willamette Valley showed the cumulative growing degree days reached 733 at June 30, which is above the 30-year average (620) and nearly double that of the pace during the cool 2010 vintage (396). It is even slightly beyond those of 2003, a recent warm year, which had compiled 725 GDD before July 1. 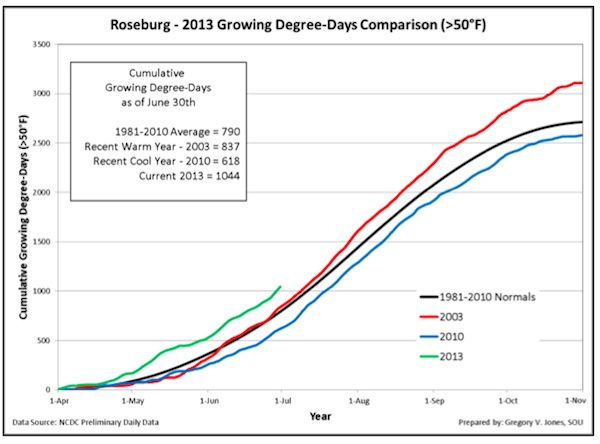 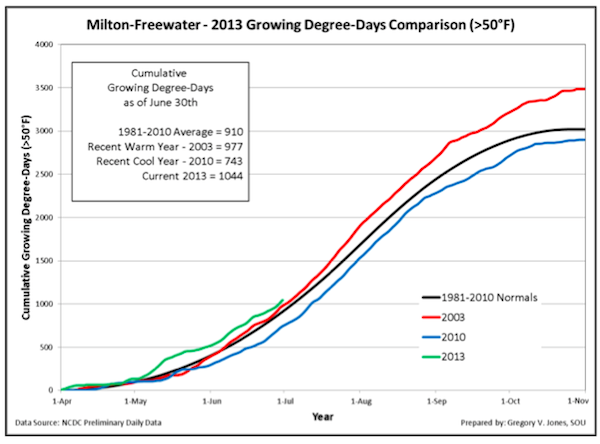 Greg Fries, President of Duck Pond Cellars in Dundee, Ore., and Desert Wind Winery in Prosser, Wash., has large estate vineyards in both states was on the road this past week look at vineyards.

“I was in Milton-Freewater on Tuesday and Roseburg (Thursday),” he said via email. “It’s kind of apples and oranges, but I did notice canopy and berry sizes very similar. I’m a little surprised at the lag I see at our vineyards in Salem vs. the GDD data.  I think the cool, wet weather catching us at bloom there threw a wrench into things.  The Dundee site is more on track.”

Report indicate Pinot Noir in the Willamette Valley was slowed by that cool, wet weather, but it is highly dependent on elevation, with some low sites way ahead and some higher sites way behind, Jones said.

The report by Jones showed temperatures in June were as much as 3.5 degrees Fahrenheit higher than normal in most of Oregon and California.

In some areas of Washington state, however, temperatures were normal or slightly below normal. And precipitation in portions of the Columbia Valley also was above normal, which hampered much of the region’s often-lucrative cherry harvest.

“Areas of northern California and central Oregon up into eastern Washington saw some substantial rains during a few storms events during the month,” Jones wrote.

“There has been no drastic change in the sea surface temperatures over the equatorial Pacific while warmer ocean temperatures off the west coast are continuing to develop,” Jones reported. “Coupled with the summer time Pacific high pressure ridge developing into its normal position, the latest guidance from the Climate Prediction Center suggests a continued trend toward drier and warmer across most of the West Coast and the Southwest.”

That’s continued good news for the Pacific Northwest wine industry, which looks to grow production to satisfy consumers around the globe.

Most of July expected to be warmer, drier than normal

And in the short term, expect most of July to feel like the first few days of the month, Jones predicted.

“The current CPC short-term forecasts (6-10 and 8-14 days) through the third week in July are calling for a much greater likelihood of above normal temperatures and below normal precipitation across the western U.S.,” he wrote.