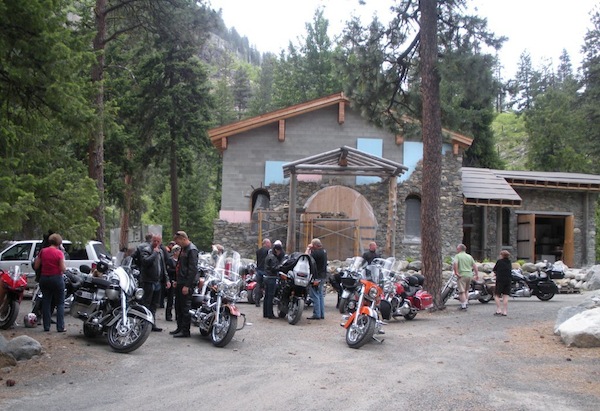 PROSSER, Wash. – Yakima Valley winemaker Scott Pontin doesn’t ride his Harley as often as he’d like these days, but he’s looking forward to keeping the shiny side up Aug. 25 as he tours the Olympic Peninsula for the fifth Moteur de Vine, a motorcycle fundraiser ride for the Walter Clore Wine & Culinary Center.

“I’ve got a Heritage Softtail, but it seems like the only time I get to ride it is on this ride,” Pontin said from Pontin Del Roza Winery in Prosser. “I’m so busy with the winery and farm, I don’t get the chance.”

Participants of the ride, which starts in Port Angeles, will receive an exclusive opportunity the following day – Aug. 26 – to tour and taste the famous wines of Quilceda Creek Vintners in Snohomish. That special event should help supporters of the rising Walter Clore Center add to the $60,000 they’ve raised since Pontin and fellow grape grower Bill denHoed started the ride in 2008.

“The trip to Quilceda Creek came through Bill, and they were happy to do this for our group,” Pontin said. “They buy fruit from Bill, and they understand the history and the cause behind it.”

This year, Moteur de Vine will tour several wineries in the Puget Sound American Viticultural Area. The two growers are accompanied by others growers, winemakers and wine lovers as they tour Washington state’s AVAs. The ride is designed to provide people outside the wine industry with a fun and educational chance to explore and see what makes each region unique — while raising money for the Clore Center.

Construction of the Walter Clore Wine and Culinary Center in Prosser, Wash., illustrated on June 29, 2013, is expected to be complete in October. (Great Northwest Wine/Eric Degerman)

“It’s pretty laid back,” Pontin said. “We don’t speed or anything like that, and we’re not out there getting drunk. We ride to a few wineries, some of which are hard to find, and our goal is to go to all the appellations in the state. They keep popping up all the time.”

Pontin, secretary on the Clore Center’s executive board, created the concept of the fundraiser using motorcycles as the hook.

“I thought I saw enough farmers on the county roads with motorcycles and asked Bill if he’d be interested,” Pontin said. “There are some customers of my winery that are avid bike riders and asked them.”

The Moteur de Vine 2008 inaugural ride featured the Yakima Valley, Horse Heaven Hills, and Red Mountain AVAs followed by the 2009 ride exploring the Walla Walla Valley AVA. The Lake Chelan AVA, Washington’s 11th and newest appellation at the time, was the destination in 2010. In 2011, the group explored the Columbia Valley and Wahluke Slope AVAs.

“We usually get about 20 to 30 bikes plus the support bus, which is usually full with 12 to 15 people,” Pontin said. “It’s really a pretty good turnout, and we don’t overwhelm the wineries. If you get too huge, then it’s rough for all the bikes to cross intersections.”

This year, the riders will include Butch Milbrandt of Milbrandt Vineyards. When they toured the Walla Walla Valley AVA, winemaker Chris Figgins of Leonetti Cellar rode his Ducati and opened up his family’s cult winery for a rare tour of the cave. Another Moteur de Vine included a tour of Col Solare on Red Mountain.

“We always try to do something special like that,” Pontin said. “Enough of us who ride are growers, and we have the pull to do this. And everyone is welcome, even those who don’t ride because we have the bus.”

Each year, the ride grows as it moves around the state. This year, the festivities begin Friday, Aug. 24, with a no-host social and dinner at Olympic Lodge in Port Angeles. On Saturday morning, riders will put their kickstands up and roll westbound toward Neah Bay to explore the 89th Annual Makah Days Arts, Crafts, and Food Fair. A shuttle bus will be available for individuals who wish to participate but who do not ride.

After lunch, motorcyclists and shuttle bus riders will head back taking 101E around Lake Crescent. In addition to the ride, stops will be made at vineyards to visit with local viticulturists and learn about the Puget Sound AVA.

At the end of the day, they will traveled 63 miles and rounded 249 curves. Upon returning to Port Angeles, the group will get some down time to relax before enjoying an eventful evening at the Peninsula Golf Club.

Sunday morning, the group will leave for Snohomish and Quilceda Creek Vintners.

“This year, it will be interesting to see how many more we’ll get because this will be our first year on the west side of the state,” Pontin said. “I’m looking forward to it because it should cooler, and I hope to take people to visit a couple of the wineries that I sell grapes to.”

In addition to the weekend’s events, a raffle is being held for a 2000 Harley-Davidson Millennium Edition Softail Deuce, which was donated by a longtime supporter of Yakima Valley wines. Tickets are $100 each, and the drawing will take place during the Saturday night festivities.

For Pontin, the weekend is special because of the camaraderie with industry and consumers as they make another connection through their interest in wine and riding their motorcycles.

“I got my first motorcycle when I was 8 years old – a little Honda 80,” he said. “I just turned 50, and I wish I rode more. I have a brother-in-law who owns six motorcycles between he and my sister. They work at Hanford, come home and ride another 100 miles after work. Now that’s a lot, but they love it.”